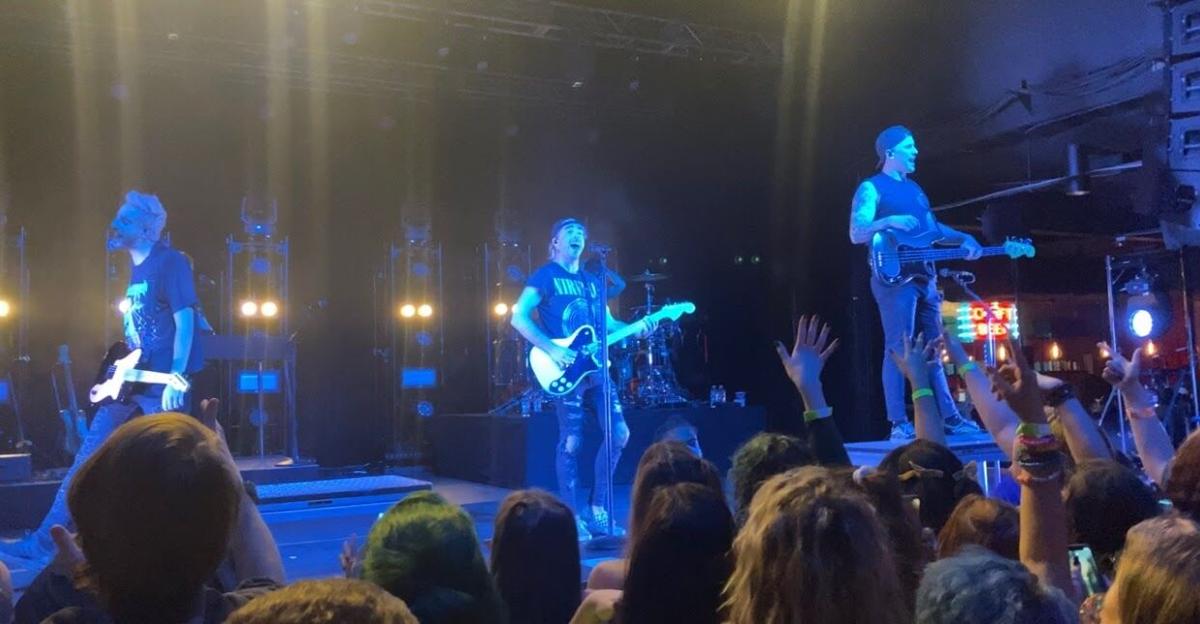 I am an avid concert goer. I have been to quite a few concerts spanning genres such as pop, alternative, indie and rock, but I am an emo kid at heart. I started listening to All Time Low in middle school.

We waited in line for maybe 10 minutes until we were asked for our IDs and Covid vaccination cards. All guests attending the show had to show proof of vaccination or a negative Covid test result within 72 hours of the event. The new policy made me feel comfortable being in the pit.

After the vaccination checkpoint, they scanned our tickets, and we were in.

Upon entering the venue, it was completely different than what I had expected. It felt as though it was a restaurant with a stage. We ran to try and get as close to the stage as possible, and we were able to sneak past a few people to get within 20 feet of the stage.

I enjoy the experience of the pit because everyone is there because they enjoy the artists' music. Therefore, it is easy to talk to the people around you and make friends.

I felt in disbelief standing there. I just stood around and took in everything.

The most beautiful chandeliers with sparkling crystals were suspended above us. The stage lights would change to a multitude of colors that would illuminate different sections of the stage. All in preparation for the two opening acts, Meet Me @ the Altar and Nothing, Nowhere, followed by All Time Low.

At 7:00 p.m., Meet Me @ the Altar took the stage. They are a pop-rock band consisting of 5 women. The bassist was having the time of her life. With each downbeat, her head swung back and forth, and her hair swooshed with the beat.

Their music was high energy, but it was not necessarily the type of music I would listen to in my free time. However, I enjoyed seeing them perform because their happiness and high energy radiated through the crowd.

Next up was Nothing, Nowhere around 8:00 p.m. He is an American rapper from the middle of nowhere in Vermont.

Before the concert, I had not heard of him, yet his songs had a familiar feeling like I vaguely knew them even though I hadn't heard them before.

His stage performance was weaker compared to Meet Me @ the Altar. There were several moments where he would kneel, and it was like he disappeared for a minute to pop up again.

I went home later that night and downloaded a few of the songs he performed.

After he left the stage, anticipation was building. The stereo began to play "Party in the U.S.A" by Miley Cyrus. The crowd burst out singing. Suddenly the sound and lights were cut, and All Time Low took the stage.

The first song they played was "Do You Want Me (Dead?)". After the iconic line "Do you want me dead?" confetti cannons blasted white and yellow confetti in the air above the crowd.

With that entrance, I knew it would be a good concert.

The set consisted of 20 songs ranging from their early career to now.

A girl in the crowd brought a cat stuffed animal. The band noticed it and made several remarks about it. That was one of several personable interactions they had with us.

In each song, you could feel the music. From the vibrations of the bass to the tickle of the snare, it was a full-body experience.

They ended the night with "Dear Maria, Count Me in." The crowd that had already lost their voices from scream singing so loud furthered their talents in the last few moments of the show. The rest of the confetti flew through the air, and it was over.

The girl mentioned earlier, chucked the cat onto the stage and the lead singer serenaded it with a "Whole New World". It was a great laugh before the feeling that the show was ultimately over and life returned back to normal.