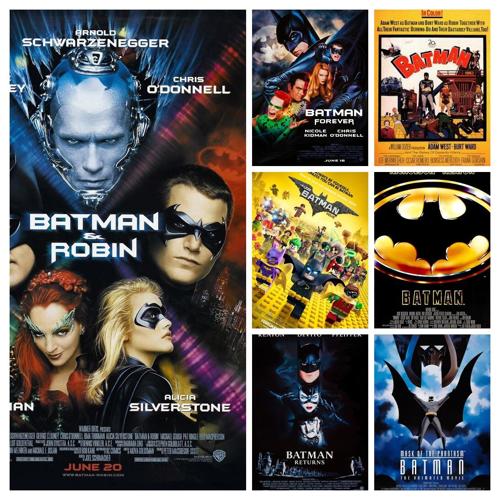 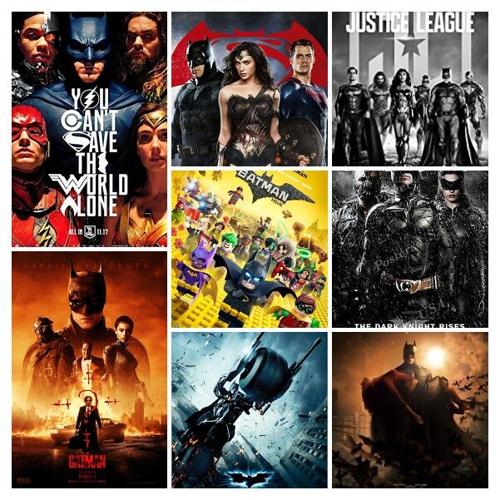 The cinematic history of a character like Batman is incredibly vast. Having been around in media since the 1960s, the interpretations of the character have taken many different forms. In honor of Matt Reeves's "The Batman" being released in theaters, I decided to outline the character's legacy. To best honor the caped crusader, it was an obvious choice to rank all the theatrical Batman adventures. Consider this a walk-through of the character's history from 1966 to 2022. This list certainly won't be to everyone's liking, but it summarizes my favorite adventures.

"Batman & Robin" at the bottom of this list shouldn't be a surprise to anyone. The George Clooney, Uma Thurman and Arnold Schwarzenegger feature is laughably bad. Director Joel Schumacher was fighting an uphill battle in what he wanted the film to be versus what the studio expected. Schumacher infamously wanted to make it similar to the animated series meeting the 60s cartoons. The studio wanted to do nothing more than just sell toys. It's a noticeable conflict of ideas that forces this cast to sound like buffoons, thanks to a script that feels like a marketing ploy. Between Schwarzenegger laying the ice puns on thick and Clooney sounding like a robot, it's obvious no one wanted to be there. What's undeniable is that there's fun in this complete misfire.

This third piece in the Zack Snyder universe was one people were eagerly anticipating from the moment when it was announced. When Snyder had to leave due to his daughter's tragic passing, Joss Whedon ("The Avengers") stepped in. Many assumed that this could "save" the film, but those folks (myself included) were wrong. Not all Batman interpretations have been winners, but none have missed the mark this much. Every ounce of seriousness and intrigue that was established in "Batman v Superman: Dawn of Justice" was stripped away for dull comedy. It wastes Ben Affleck's talents and makes a frustrating final product.

Before the disaster of "Batman & Robin," Joel Schumacher stepped behind the camera with "Batman Forever." The cast that included Val Kilmer, Tommy Lee Jones, Jim Carrey and Nicole Kidman drew many eyes. The finished product was more cartoony than most fans expected but delivered on the silliness of this world. A guy who dresses up in spandex to fight villains named "The Riddler" and "Two-Face" is admittedly ridiculous. Schumacher embraces this crazy nature and delivers a film that feels closest to a cartoon. Kilmer is also in on the zaniness and gives a Bruce Wayne/Batman that fits in the world. It's certainly not one of the best portrayals, but one that embraces what it is.

Snyder's DC Universe is one of the more controversial adaptations of these classic characters. Some love his interpretations, whereas I always have mixed responses. "Batman v Superman" was an attempt to build out a universe but was never as exciting as it could be. Snyder wants to cram so much story and character into one film, that it's a chore to sit through. It's crammed with dark imagery and self-seriousness, making it a dull adventure. Besides a scattered plot with some terrible performances, especially from Jesse Eisenberg, there is one saving grace: our introduction to Affleck as a dark and angry Batman. This Batman has been through a lot, and he sells that grizzled persona. It's one of my favorite versions of the character, and it delivers.

Many great actors have taken on the role of "Batman," but none are as iconic as Adam West. His version of the caped crusader was considered by many to be a parody of what the character was. Alongside Burt Ward as Robin and Cesar Romero as Joker, this adaptation plays like a feature-length episode of the series. Your enjoyment depends on how far you are willing to go with the silly-natured Batman. West embraces that humor and delivers an entertaining, fun and period-specific portrayal of the character. Many won't be used to it, but it does offer quite a bit of entertainment.

In 2021, Snyder completed his vision with the infamous "Snyder Cut." Fans were thrilled that Snyder's vision could be completed, even with a four-hour running time. The biggest highlight of the four-hour epic for this critic is Ben Affleck's Batman. It's a bloated story, but this version of Batman is a well-rounded and perfect continuation of what was started in 2016. We know and understand his world-weariness and can finally realize why he wants this team together. It's undeniably a self-serious version of the character but is effective in what it sets out to do.

Many consider Michael Keaton's Batman/Bruce Wayne the version of their childhood. Keaton nailed the balance between suaveness and mystery with a dash of needed heroism. It's a sort of portrayal that anchors a film, which unfortunately teeters too often into weirdness. Burton's eccentric nature, particularly with Danny Devito's portrayal of The Penguin, made this one an oddity. Whenever Keaton is doing his thing (or simply having charged chemistry with Michelle Pfeiffer), it's a beautiful version of the character. What makes it far from perfect is an imbalance between what works and what doesn't. The material is so weird that the chemistry scenes feel few and far between.

Christian Bale and director Christopher Nolan's trilogy is considered a staple of the character. Coming off the heels of "The Dark Knight," audiences were eager to see how the trilogy would conclude. Besides some very annoying plot twists, Bale's portrayal ends a legacy. What makes the film the weakest of the trilogy is what came before. Even by the same creators, it's hard to consider how someone could top what "The Dark Knight" did for superhero culture. As a Batman adventure, "The Dark Knight Rises" is a serviceable one that delivers on the thrills. It manages to balance those thrills with closure for the fans that have been here since "Batman Begins" in 2005. The misstep is not giving audiences anything they haven't seen before.

Many consider Michael Keaton to be the definitive Batman of their youths. With Tim Burton behind the camera, this version proved to be an homage to Batman cartoons. Besides Jack Nicholson's iconic portrayal of The Joker, we were given a fully realized Bruce Wayne. It certainly suffers from the typical Burton weirdness, but Keaton gave us a heroic character. Giving the weird world an anchor steeped in heroism made him a fan-favorite Batman for many. There is definitely a nostalgia factor for those who grew up with this version of the character. These reasons, along with feeling like the animated television show come to life, make it one of the better interpretations of the character.

A year after "Batman Returns," we were treated to our first animated Batman adventure. Kevin Conroy's Batman is a fan-favorite interpretation of the character. This version of Bruce Wayne has to deal with one thing he hasn't had to before: love. This creates a fascinating balancing act of a brooding Batman and a guarded Bruce Wayne. It's the sort of portrayal that we had never seen up to this point that made it all the better. Even being a box office bomb upon its release, fans have heralded it as one of the better comic adaptations. It was simultaneously an improvement on the film from 1992 and a look at the darker stories of this character.

"Batman Begins" had the tough job of being the first live-action Batman film since "Batman & Robin" in 1997. When people heard the name Christian Bale, it left them scratching their heads. Its release in 2005 helped revolutionize the character and make him palatable for a modern audience. Bale's portrayal of both Bruce Wayne and Batman had a similar tone to the comics. With Nolan's direction treating the story like a drama, it was something fresh and exciting.

Besides being a love letter to Batman lore, it also gave us a voice performance to rival Kevin Conroy. Will Arnett's Bruce Wayne and Batman had to manage a tricky tone balance. Arnett nails the suave playboy and dark and brooding superhero. What makes this Lego outing so high on the list is that the film asks him to be a father. The plot point of adopting Robin (Michael Cera) as a son and superhero sidekick gives him surprising depth. Yes, it's nice to see him interact with classic villains like the Joker, but the film wisely focuses on humanizing him. Arnett embraced this newfound take and made a Batman unlike any other.

Not a single film on this list has been as faithful to the source material as "The Batman." Matt Reeves' crime-fueled take on the character allows Robert Pattinson to shine. Some complain that this Bruce Wayne is emo and moody, but this is only his second year of crime-fighting. He's messy, volatile, brutal and doesn't quite understand the hero Gotham city is in desperate need of. Pattinson plays this moral dilemma beautifully and creates a version of Bruce Wayne and Batman unlike any other. It's the rare first in a trilogy that made me more excited to see the hero's growth than what villain he could fight in the sequel. The combination of Reeves's direction and Pattinson's near-silent performance earned a high place on this list.

After "Batman Begins" and a tease of the Joker, people were eager to see what Bale and Nolan did next. The movie's real strength comes from Heath Ledger's brilliant and haunting performance as the Joker. As he says in the story, this version of the character is someone who "just wants to watch the world burn." This sort of monstrous villain brings out the true essence of the Batman hero. It allows him to make heroic sacrifices in the name of a greater good, making him the hero he is. Giving Bruce Wayne a true hero's journey in the backdrop of a crime story made this more than a superhero movie. It is a crime drama disguised as a superhero epic.