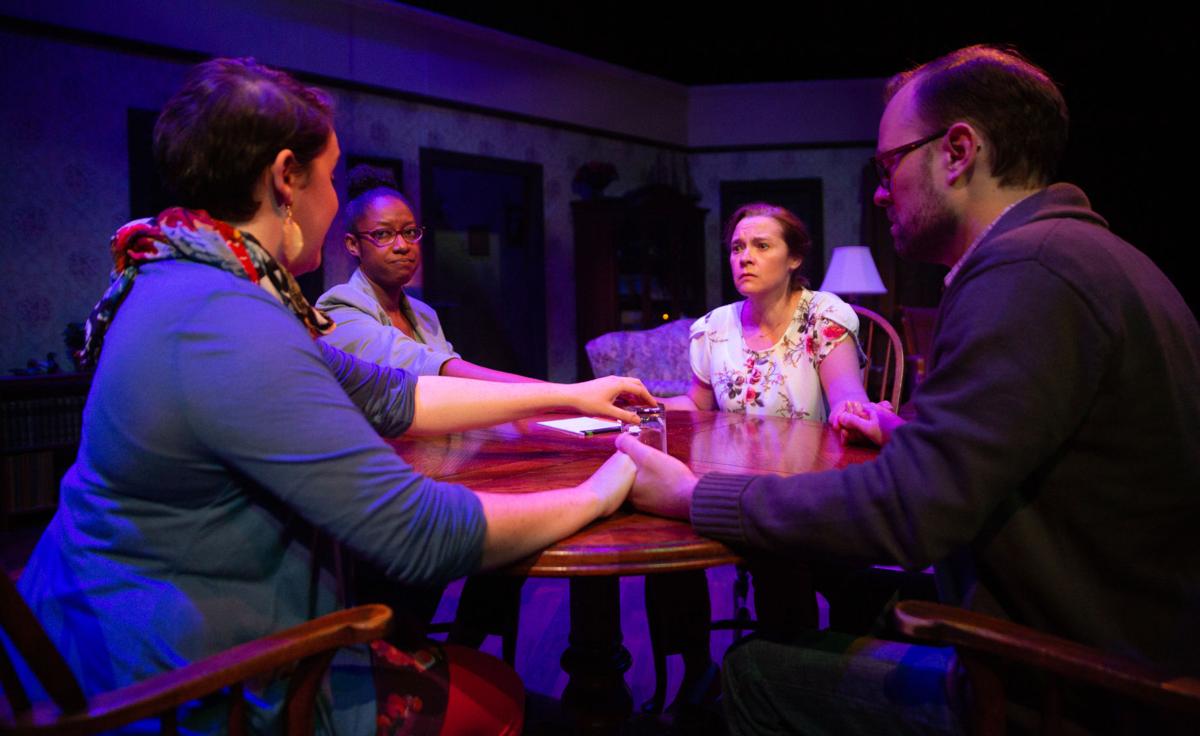 Photo of “The Great Beyond.” Courtesy of Fenix Fotography. 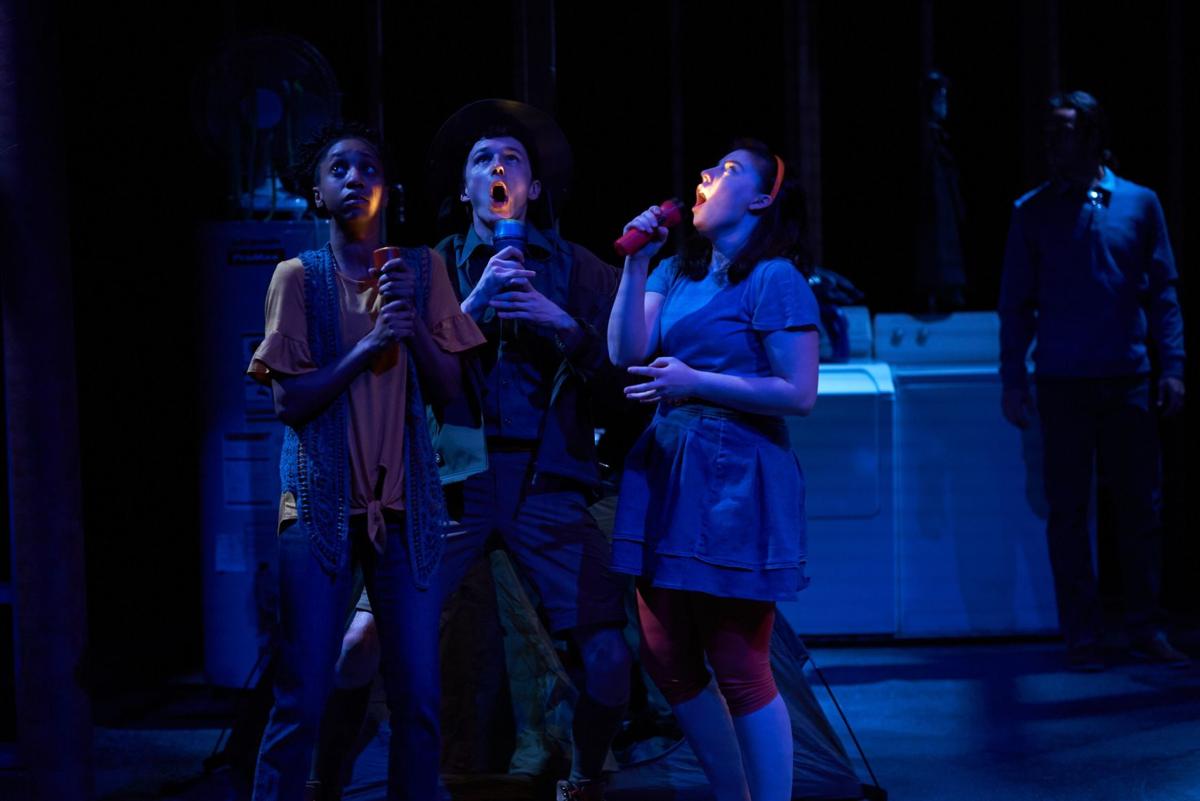 Photo of “The Ghost of Splinter Cove.” Courtesy of John Merrick.

Photo of “The Great Beyond.” Courtesy of Fenix Fotography.

Photo of “The Ghost of Splinter Cove.” Courtesy of John Merrick.

Two different plays, two unique casts, two different theaters. One cohesive story. That was the goal of Actor’s Theatre of Charlotte and Children’s Theatre of Charlotte’s new productions, “The Great Beyond” and “The Ghost of Splinter Cove.” Written by the same playwright, the prolific and acclaimed Steven Dietz, the two productions take place in the same house on the same somber evening. Upstairs is home to “The Great Beyond,” while downstairs hosts “The Ghost of Splinter Cove.” Part of The Second Story Project, the two plays are strong enough that they can stand alone but complement and reveal the full story when viewed together.

“The Great Beyond” at Actor’s Theatre of Charlotte focuses on four adults as they cope with the death of a family member, the father figure known as “The Captain.” Monica (Tonya Bludsworth), the family perfectionist, was his caretaker during the last stages of his life. Now that he’s passed on, she remains in the house to pack up his things. Her ex-husband, Rex (Scott Tynes-Miller), arrives to drop off the children and socialize for a while. Caught in mourning himself, he decides to stay when Monica asks him to remain and help her handle her estranged sister’s visit. This sister is Emily (Robin Tynes-Miller), a woman looking to end her country-wide tour apologizing to everyone she has ever hurt. Her final task? Apologize to her deceased father with the help of her girlfriend Rene (Tania Kelly), who hosts seances for a living.

It is a tightly-wound and emotional performance, existing firmly in the genre of family drama with a hint of the supernatural. Tensions run high between Monica, Rex and Emily, who are frustrated by the fact that Monica refused to share or ask for help caring for The Captain. The sister dynamic between Emily and Monica is incredibly fractured, while Rex and Monica highlight the complex chemistry torn between people-who-care-deeply-for-each-other and trying-to-move-on. Rene serves as an outsider to all of it, often reflective of the audience when large family secrets emerge. For example, throughout the first act, the characters often react strongly to references to camping or The Captain. Eventually, Rene is just as surprised as the rest of us to learn that the sisters also had a brother, one that went missing on a camping trip to Splinter Cove with his father at only eight years old.

These elements provide the complex backstory that “The Ghost of Splinter Cove” rests on though the play can be fully understood without the context. As a standalone piece, “Splinter Cove” focuses on the children in the picture. Rex and Monica’s children, Nate (Chester Shepard) and Cora (Carman Myrick), have been sent to the basement to play/stay out of their parent’s hair. They are joined by Rene’s daughter Sydney (Kayla Ferguson). The three spend some awkward time introducing themselves and their imaginary friend J (Arjun Pande), before deciding to embark on a simulated camping trip with the help of an app on Rex’s phone that can control the lights, fans and speakers in the basement. The trip quickly takes a turn for the unexpected when the children leave their tent and find themselves outside, in the woods of Splinter Cove with a man named Tobias, or The Captain (Mike Dooley).

Despite the fact that “Splinter Cove” is not the play with a seance, it feels much more supernatural. While the events of the seance in “The Great Beyond” are left open to the audience’s interpretation (Did the characters push the cup or write the words to get the closure they needed, or was it the spirit of The Captain?), “The Ghost of Splinter Cove” seems to make it quite clear that the children are dealing with ghosts and supernatural experiences here — though there is definitely a viable interpretation of the show in which all of this occurs in their imagination. Plotwise, they’ve been transported to the night their uncle went missing. Upon meeting their grandfather, they become his search party and look for the lost child. The story then forces each child to face their fears by assigning them tasks they’ve admitted scare them, such as swimming in deep water or trusting others.

All of the children in “Splinter Cove” are played by adults, but it never feels disingenuous or inaccurate. The play never dismisses or condescends, though it does find humor in their conversations and actions. Most notably, it refuses to shy away from dark, surprising, or hard-to-grasp material. It trusts the children viewing the show to understand it.

In terms of performances, there isn’t a single weak actor in either show. The characters’ personalities are complementary, allowing the ensemble casts to play off of one another. Standouts include Scott Tynes-Miller as Rex, Carman Myrick as Cora, and Chester Shepard as Nate (which actually marks the second time I’ve seen him play a child; he took on the role of Christopher Boone in “The Curious Incident of the Dog in the Night-time” in Fall 2018). The set design for both shows coordinates well, but the lights and sound are what really make the supernatural elements work. “The Great Beyond’s” darkly lit room with candles that turn off by themselves balances with “Splinter Cove’s” loud thunder, echoes, and flashing lights.

Seeing both shows is a unique experience, as secrets reveal themselves and depth is revealed that might not have been there without the knowledge gained from seeing the other half. Together, the plays provide a thorough and imaginative picture of what happened on that night. According to The Charlotte Observer, this collaboration of interlocking plays by the same writer, one aimed at adults and one at children, is unprecedented. Watching both feels fresh and original. It is exciting to sit in the audience and make connections between the plays, to wonder about how you might have felt if you viewed them in the opposite order. It is also rewarding to know that these are two original works premiering for the first time in Charlotte, NC. It is a definite win for Charlotte’s theater scene, one I hope continues to encourage experimentation and unique projects.

If making time for both plays is entirely impossible, “The Ghost of Splinter Cove” is the more unique of the two. While “The Great Beyond” is impeccably acted and produced, it sits more firmly in the genre of family drama. It also doesn’t shy away from the tropes of an overbearing wife/laid-back husband pair or the fact that the person of color in the cast is also the only one with a connection to the spirit world. These are familiar character elements, and while they don’t entirely harm the content of the play, they aren’t particularly engaging aspects of the production. What makes it feel new are the smaller bits, like Emily’s need to make apologies, Rex’s connection with The Captain, or the unique addition of a seance into the genre. “Splinter Cove’s” run time is about an hour with no breaks, while “The Great Beyond” runs for 90 minutes plus a 15-minute intermission.

In Dietz’ playwright’s note, he writes, “…inevitably, there are gaps in what we tell ourselves about our own family; uneven knowledge between siblings and parents; events lost to history or covered by silence over time.” The two productions emphasize this, as the children learn things the adults don’t know and vice versa. Even amidst the adults, memories of The Captain are shaped by the person speaking; different perceptions of family events are explored throughout. When reflecting on both shows and their focus on family ties, this idea of performing for both young and old audiences feels more impactful. Dietz wants to engage with both sides of the family, which he writes are “on different continents, separated by a sea of time,” and get them involved in the conversation. The complementary shows encapsulate this effort, providing a well-rounded exploration of an entire family on a single night. The children and adults are all examined with empathy and understanding; their voices are equally important. As an audience member, that feels revolutionary.