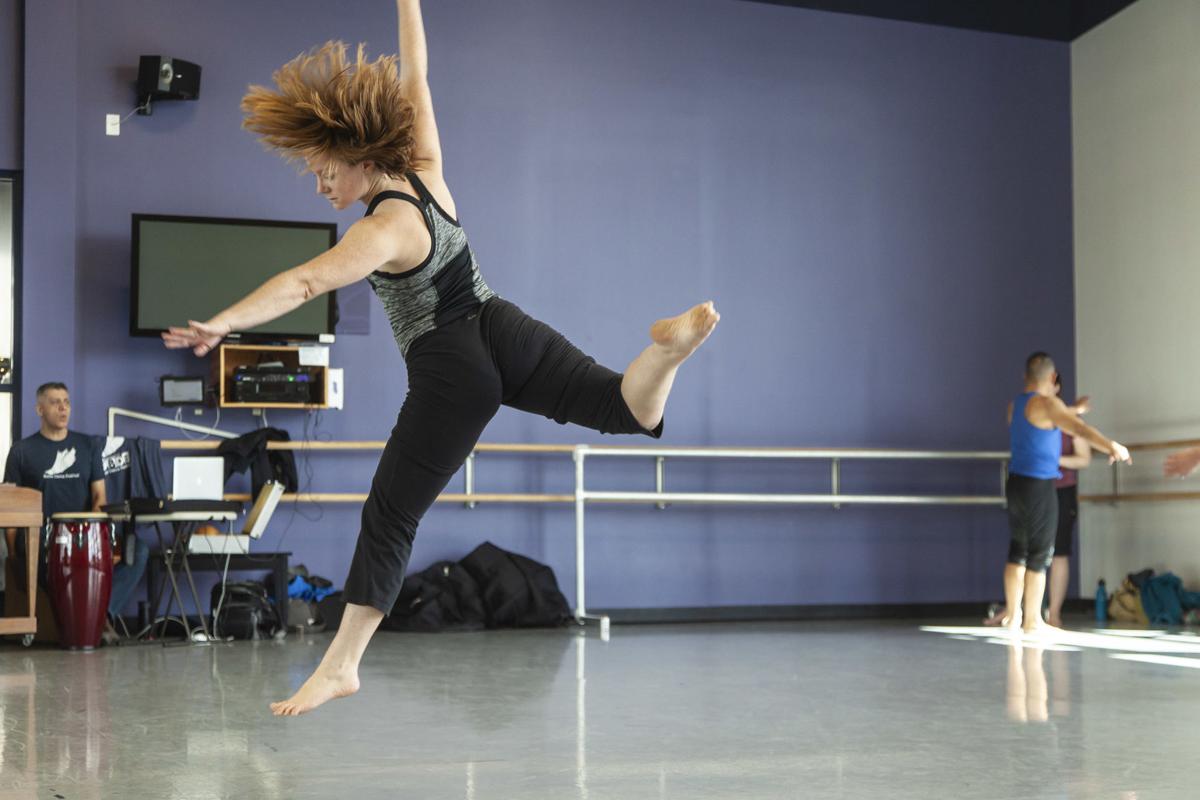 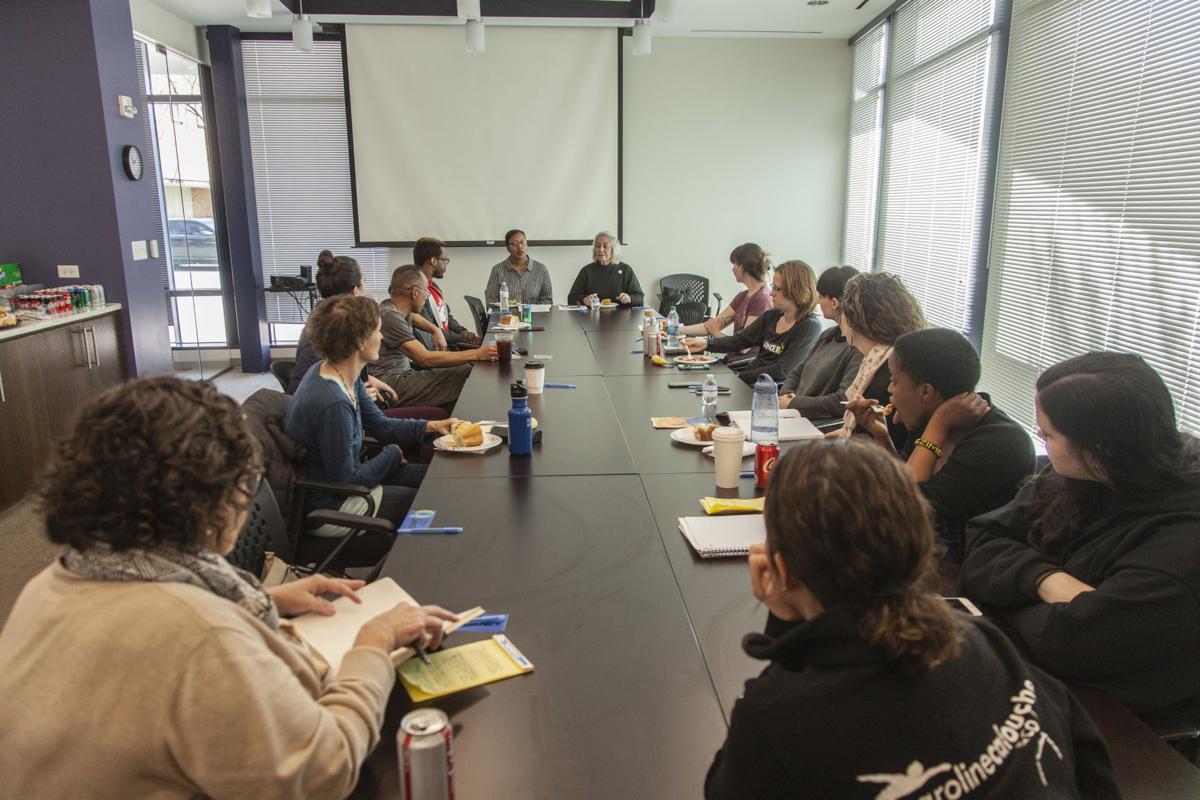 The Charlotte Dance Festival and QCity Dance collaborated to produce a weekend of dance March 15 through 17 at Charlotte Ballet’s Patricia McBride and Jean-Pierre Bonnefoux Center for Dance in downtown Charlotte. The weekend featured multiple performances, master classes and roundtable discussions attempting to bring together the regional and Charlotte dance community. UNC Charlotte was represented by Department of Dance Chair Dr. Ann Dils and Department Office Manager Lakisha Rios, co-founders of QCity Dance, as well as Associate Professor of Dance EE Balcos who, along with Dils, serves on the board of the Charlotte Dance Festival.

Larry Keigwin and Nicole Wolcott headlined the festival. The New York City based founders of the renowned Keigwin + COMPANY presented their original dance-theater piece “Places Please!” Set “behind the scenes” in a dressing room, the piece hilariously depicts the final moments dancers experience before going onstage, as well as some bittersweet personal confessions about the dance life. “Places Please!” was created in 2017 and has since toured nationally to great acclaim.

Keigwin and Wolcott danced everything from a lyrical pas-de-deux partnering duet to goofy solos in which they changed costumes, even stripping down to their underwear onstage (at one point Wolcott keeps changing wigs; at another point, Keigwin wears an orange, furry, skin-tight catsuit and then needs help pulling it back off). The audience was made up of mostly dancers and dance teachers who laughed at the ridicule and the inside jokes; we all knew what it was like having to wear an unflattering costume or fake a smile when you really have to go to the bathroom. Although full of these nods and winks to the dancer, the piece was certainly accessible to non-dancers as well.

Keigwin and Wolcott were also able to vary the silly emotions by reflecting on the many hard parts about a performance career: each dancer had a sincere and touching monologue followed by more movement. During Keigwin’s monologue, he talked about one of his first gigs (whether true or fictional) as a dancer, entertaining for birthdays and bar mitzvahs. Once, for a little extra money, he unknowingly agreed to be “the head of a table,” which resulted in sitting underneath a table with only his head and two hands sticking out to serve hors d’oeuvres. While hilarious to imagine and hear about — for example, kids kept sticking carrots and celery in his ears and mouth and he had no way to remove them — the story was also poignant. Keigwin explained the lengths performers go to in order to keep dancing, even if it means being mocked and exploited.

Each piece was adjudicated earlier in the fall and was selected to be performed that evening. Particularly interesting was a solo presented by NYC based dancer Cameron McKinney entitled “E.X.P.L.O.D.E.” McKinney is the founder and artistic director of Kizuna Dance, whose mission is to “depict aspects of Japanese history and culture through the use of a unique blend of hip-hop, house and contemporary movements.” McKinney melted in and out of the floor using crawling movements, flips and other break-dancing-like spins on his back and neck, seamlessly moving through space and levels without a sound. In keeping with the company’s mission, he performed these characteristically hip-hop and contemporary movements to Japanese vocal music by Geinoh Yamashirogumi and Toshio Hosokawa. McKinney was a strong mover who showed power as well as grace; his choreography was arresting.

Another particular standout piece from the Gala came from the dancing of Gavin Stewart and Vanessa Owen of Asheville, NC. The two performed a duet entitled “Dendrovictus” to the music by Gavin Bryars and displayed exceptional ballet technique. They had great strength and flexibility throughout this original, self-choreographed contemporary ballet work.

The weekend concluded Sunday, March 17 with a few final events, including specific QCity Dance Summit events. QCity Dance is a newly developed organization that seeks to bring together the Charlotte dance scene through newsletters, advertisements and an all-purpose calendar (listed on their website, qcitydance.org) that lists Charlotte dance events. QCity Dance hopes to be a one-stop place for dance happenings in Charlotte, be it concerts, classes, auditions, or criticisms. It is a noble pursuit (and one appreciated by aspiring dancers) and hopefully will continue to grow as an organization and initiative.

The Summit included a Studio Directors Roundtable, a Choreographer/Company Director Roundtable, as well as the class taught by Wolcott. More QCity Dance Summit events had previously been scheduled for the Friday and Saturday of the festival weekend but were unfortunately canceled later.

Finishing off the festival was the Charlotte Dance Festival Youth Gala, another concert in which pieces were selected through an earlier adjudication process. This gala included 10 pieces with students from local dance studios, independent dance companies and school dance programs.

The weekend was an exciting one for the Charlotte dance community and the community at large. The events were fairly well attended, though mainly by dancers and dance enthusiasts: UNC Charlotte Department of Dance definitely held a large presence, both in management and in attendance. Hopefully next year, dancers and choreographers will seek out their non-dance friends and family to join them in experiencing what Charlotte and surrounding regional dance has to offer, and what we hope it will become.