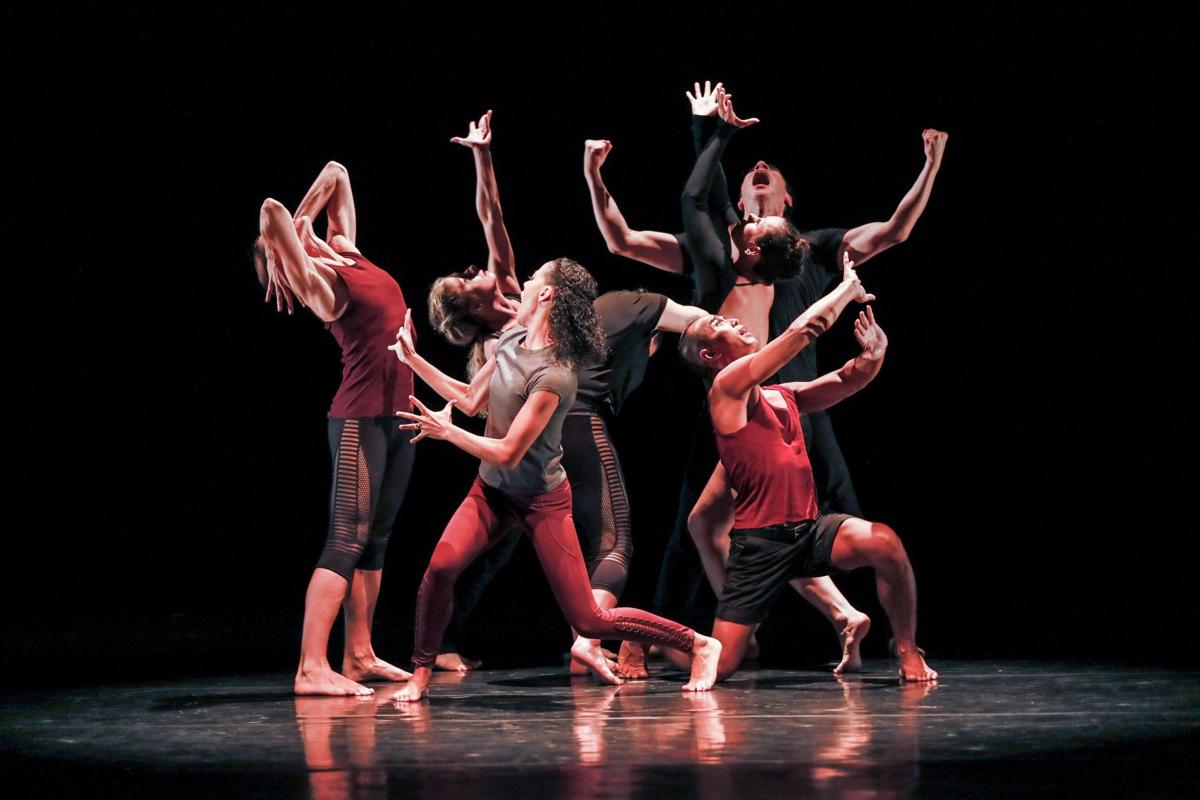 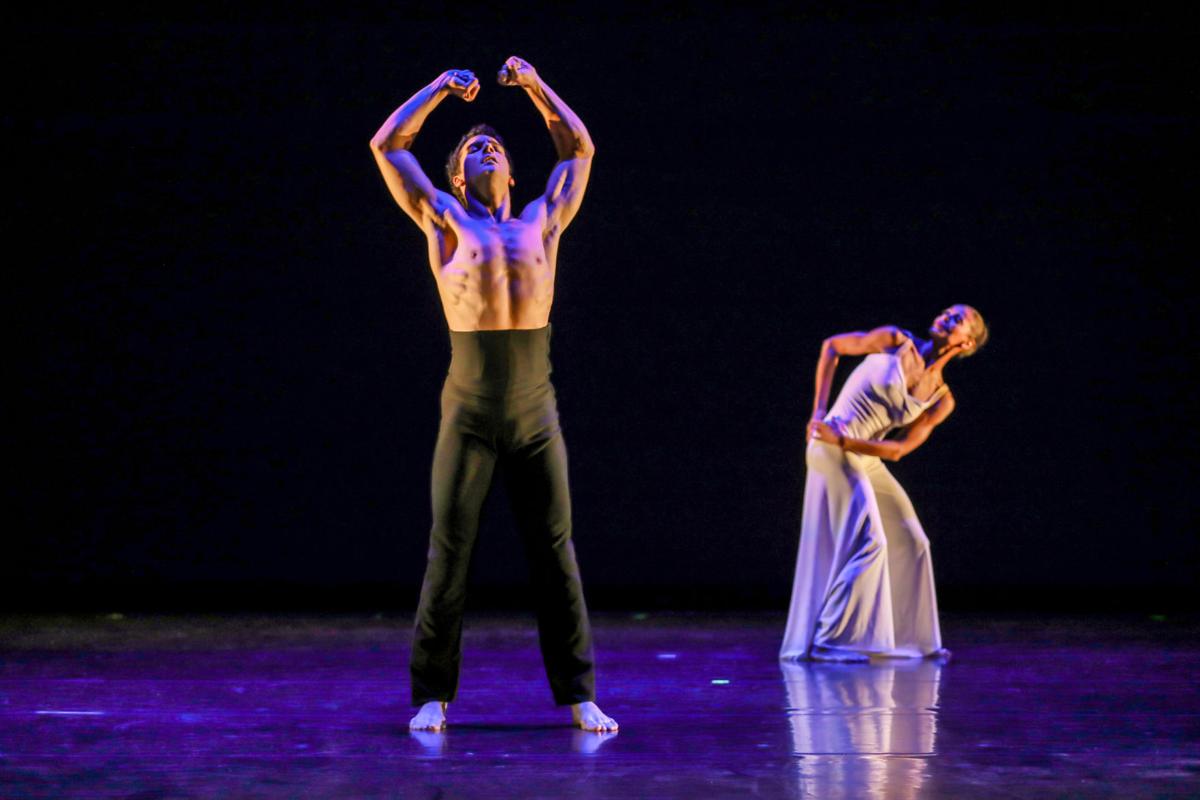 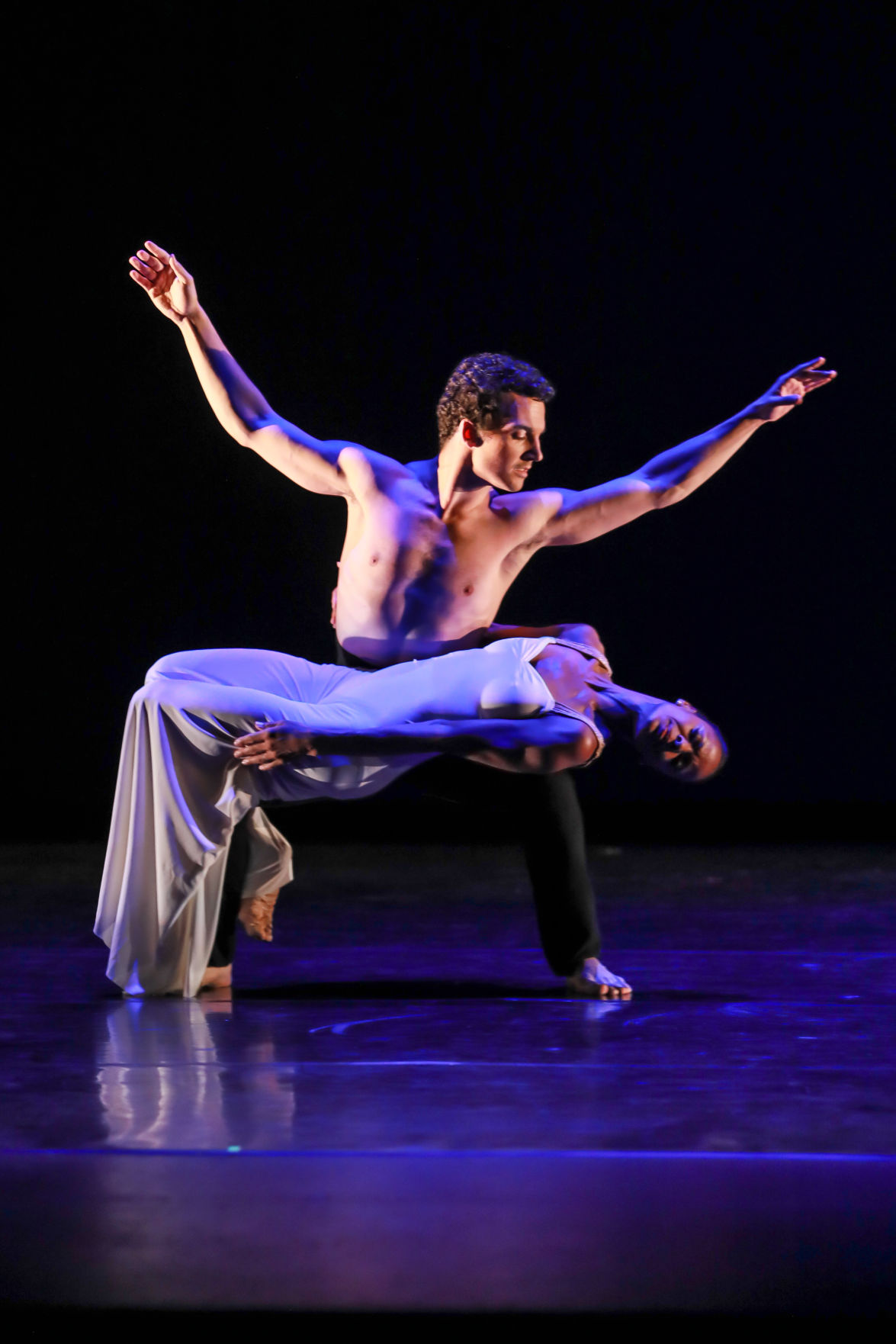 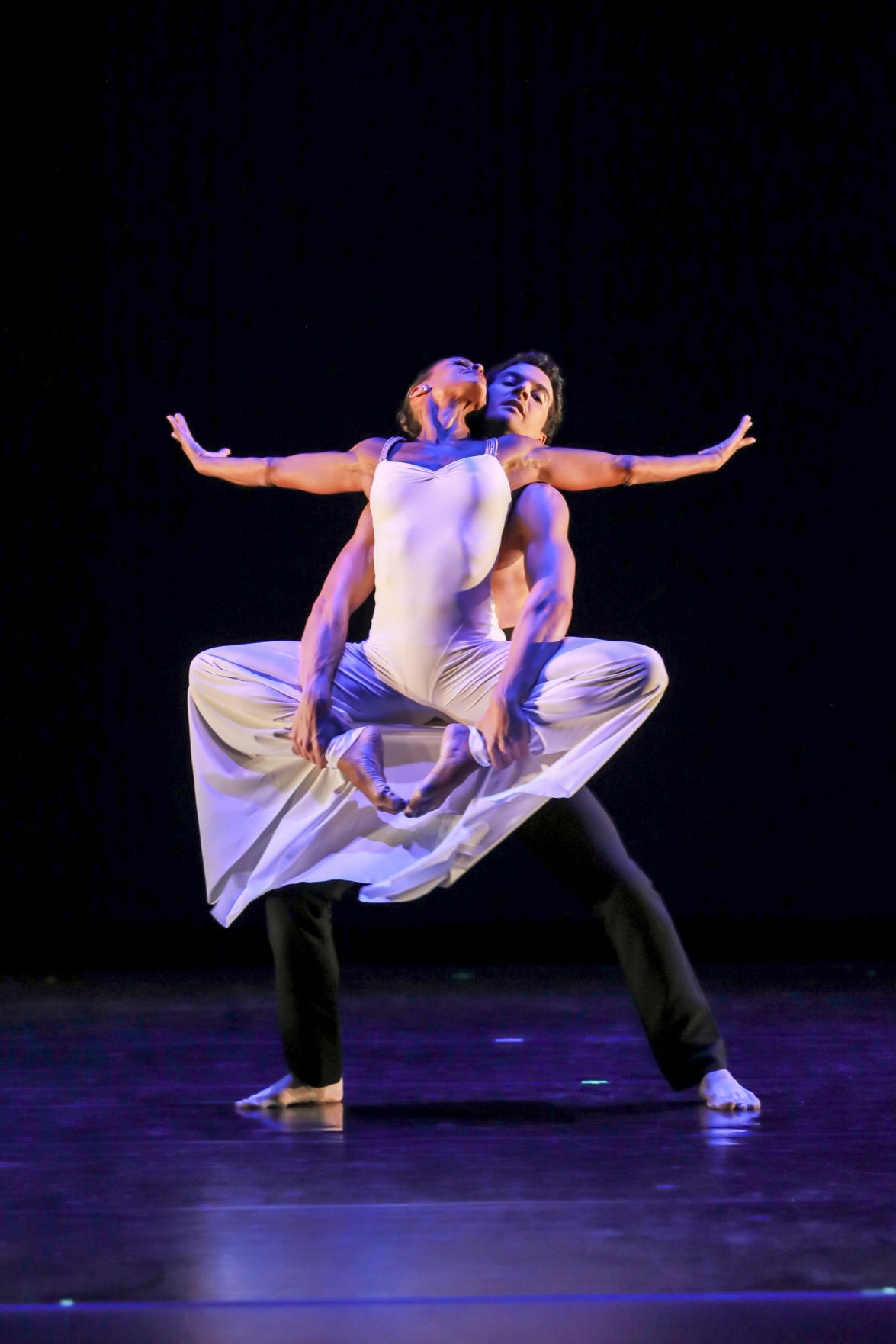 From jazzy contemporary to a modern classic, the Department of Dance presented its annual Faculty Dance Concert Sept. 6 and 7 in Robinson Hall. The seven-piece concert featured the works of three dance faculty and three guest artists, including a duet choreographed by the modern dance legend Martha Graham (1894-1991). Linking together a classic work with contemporary works and classic styles with contemporary styles emphasized the Department of Dance’s commitment to diversity as well equalized the values of remembering and reinventing.

The concert opened with “Luminosity,” a dream-like solo choreographed and danced by Associate Professor EE Balcos. Balcos flowed and floated to Claude Debussy’s lovely “Prélude à l’après-midi d’un faune,” with stunning lighting by Gordon W. Olson that faded in and out of bold greens, purples and blues. Balcos seemed to be experiencing an awakening, exploring something new-found through wide reaches and vibrating fingers, sometimes devouring the space and sometimes standing almost still in a single down pool of light.

Following “Luminosity” were two more faculty-choreographed works. “Frigid Times,” by Assistant Professor Tamara Williams and “Hapa,” by Adjunct-Professor Audrey Baran. “Frigid Times” was a contemporary modern and jazz-influenced piece danced by two current UNC Charlotte students Lydia Heidt and Rahquelah Conyers, and one alum, Levin Huesler. The piece was danced to the song “Winter in America” by Gil Scott-Heron, which describes through cool and soulful melody frustration and sadness at American social injustice. The dancers mimicked both the “cool” and the frustration, through grounded and lyrical movement varied with sharp and tense spurts of rage danced in unison as well as in solos.

“Hapa,” danced by Audrey Baran and members of her dance company Baran Dance, was a contemporary piece to minimalist music by Ryuichi Sakamoto and Viers, featuring Yaeji. Baran and the dancers moved in and out of unison through grounded, loose movement, often moving to and from the floor seamlessly, seeming entranced by the incessant robotic score. (Baran, along with being an Adjunct-Professor of Dance at UNC-Charlotte, is also an alum of the Department of Dance, and received the 2019 Department of Dance Distinguished Alum award).

The second half of the concert featured Movement Migration, an inter-genre and inter-generational dance company founded by and under the direction of Associate Professor Kim Jones. Movement Migration is made up of local, Charlotte-based dancers, along with dancers from New York City and beyond. Several of the company’s members have danced or currently dance with some of the most prestigious dance companies in the world, including the Martha Graham Dance Company and the Jose Limon Dance Company; Jones herself was a member of the former. The company presented four works, including three original by guest artists Blakeley White-McGuire, an NYC-based choreographer and former principal of the Graham Company, and Pauline Legras, a Charlotte-based choreographer and former member of the Graham II Company.

Legras’ work “I. Entry” was a duet for two women, Amy Claugus and owner of Plaza Midwood’s Open Door Studios Jacqueline White, who danced in long gowns, one tan and one blue. The dancers weaved together notions of isolation and intimacy to a lyrical “Nocturne” by Chopin, sometimes moving on top of each other, sometimes breaking apart, suddenly and simultaneously.

White-McGuire’s pieces “Dissipating the Wall (Between Us)” and “Lullaby – The Stories We Tell” were contemporary-modern pieces for groups. “Lullaby” was a particularly lovely piece, featuring five dancers who danced to music by Leonard Mark Lewis. Dancers danced in unison, duet and solo in tan shirts and pants (by Wendy Yang), complemented by the lighting (by David Fillmore). This piece featured several arresting moments, including a brief solo entrance by the current soloist with the Graham Company Lorenzo Pagano, who, at one moment, flew out of the wings and onto the stage in leaps and turns, eventually to pair up with dancer Dominique Willis for a pas-de-deux (duet).

Both Pagano and Willis along with dancer Pablo Francisco Ruvalcaba not only performed for this concert but also gave several masterclasses to dance students and a dance lecture in Atkins Library, along with Balcos and Jones. A final set of master classes were given to dance students this past week by guest artist Myrna Kamara, a former ballerina with the esteemed New York City and Miami City Ballets, who currently lives in Switzerland. Kamara and Pagano danced the Martha Graham duet (restaged by Jones), “Moon,” the second-to-last piece before “Lullaby.”

“Moon” is one of the six odes to elements of nature from the 1952 suite “Canticle for Innocent Comedians,” and it went by far too quickly — I could have watched Pagano and Kamara dance it over and over again. Graham’s work is characteristically grand and presentational, with a mastery of shape and form and a frequent emphasis on archetype, such as in this piece. This work features a man in black pants and a woman in a white floor-length dress, who move together and separately through lifts and on the floor, contrasting the darkness and the light of the moon.

Pagano and Kamara moved together and separately in grace and perhaps in anguish — Pagano would pound his chest in threes while looking up towards the sky; once he held Kamara as she was contracted with her head back and shoulders forward (a traditional Graham “pleading” position) with her hands and wrists pressing up in vulnerability. It’s astonishing the meaning and emotion that can be evoked in such a short amount of time, and, needless to say, without words. The movement leaves you with so many questions but yet with a new understanding, as well. Perhaps just as poignant is the fact that this piece was created more than 60 years ago and yet is fresh to impress an audience of 2019. The dancers move so precisely yet freely in and out of striking images like a sculpture come to life.

It’s easy to dismiss our dance ancestors and otherwise with the notion that it must be impossible for us to relate; “well, how could they understand? Things were so different for them 60 years ago.” But of course, some things do last; instead of shedding relevance with age, some things continue to acquire an audience, growing to encompass an even larger community. It’s like aged cheese or perhaps a sedimentary rock. Such seems to be the case with “Moon,” and such also seems to be the message of Movement Migration, whose dancers span in age from 20s to 50s, and whose works do, too. Perhaps this was the message of the whole Faculty Dance Concert, whose works span in age from 67 years old to just a few odd months. Maybe this diverse mix was to say that the past and the present, as well as all different styles, belong on the stage together: Remembering and reinventing are equally important.