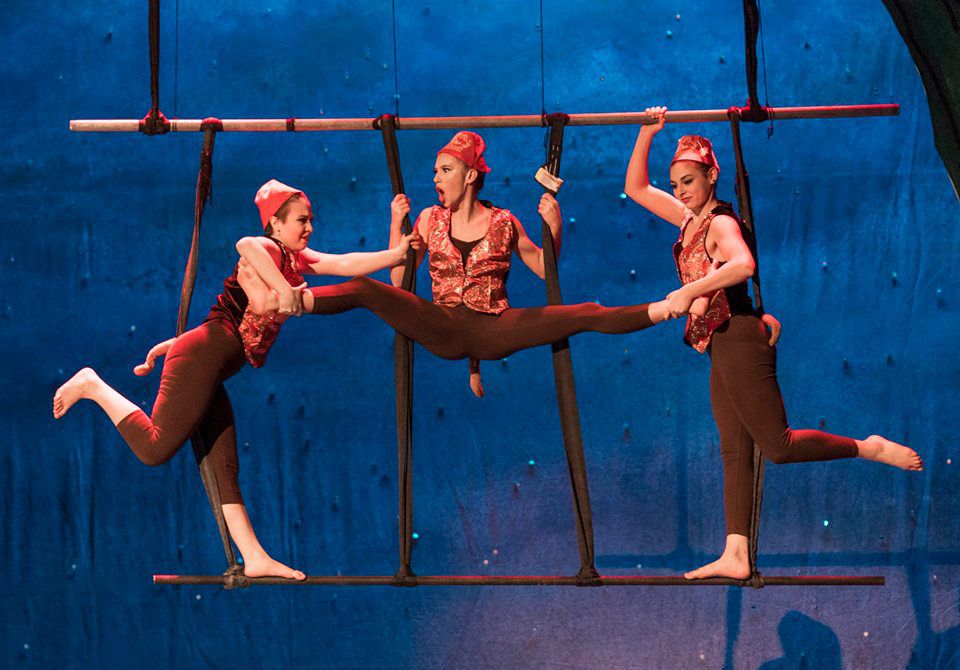 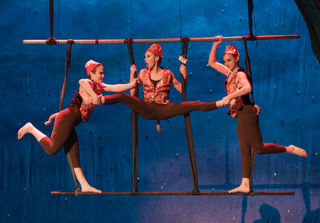 Junior Krysta Rogden is only five-foot-three, but on Thanksgiving Day, she could have been dunking with Yao Ming. Rogden was a stilt-walker in the Novant Health Thanksgiving Day Parade, which made her about the height of the seven-foot-six basketball player. It’s not everyday one gets to stilt-walk, but as an apprentice with the aerial and contemporary dance company Caroline Calouche & Co., Rogden gets many opportunities to hang out above the ground.

“Aerial,” according to Rogden, refers to any “act or dance that is done off the ground.”

“So, we have aerial silks, trapeze, aerial rope, aerial hoop,” Rogden said. “At Caroline’s, we try to mix aerial and dance.”

Rogden is a dance major; her interest in aerial rooted in this love for dance.

“I was a part of a half recreational/half competition dance studio in high school, and as part of ‘broadening our horizons,’ we took a master class at Caroline’s,” Rogden said. “Caroline Calouche [the owner and founder] performed a solo to ‘Somewhere Over the Rainbow.’ It was so beautiful…it was dance and aerial combined, not just a circus act, and, to me, it was just so moving. So I started to get involved more over the summer.”

After Rogden’s studio disbanded, she looked for a new place to continue dancing and immediately thought of Caroline Calouche & Co. She danced there as a student from 2014 to 2015 and was part of their Youth Ensemble.

“After I graduated, I could no longer be in the Youth Ensemble, but Caroline was still interested in me as a dancer,” Rogden said. “She saw I was still sticking around in the Charlotte area, so she asked me if I wanted to take on a role in ‘Clara’s Trip’ [the company’s version of the Nutcracker ballet] that year.”

Calouche had also been speaking with Dance Department Chair Dr. Ann Dils about bringing aerial to UNC Charlotte and wanted to see if Rogden could participate in a test-run partnership. An apprenticeship with the company would work like an independent study at school.

“She kind of needed me to be a guinea pig to see how that would work out,” Rogden said. “Last fall was when I did the first apprenticeship with her.”

Rogden began training over the summer while attending Caroline Calouche & Co.’s annual summer intensive. As the apprenticeship began, Rogden started attending rehearsals two to three times per week, sometimes as much as seven to 10 hours per week.

“So the apprenticeship entails attending all the training. Also, I had to keep a journal of all the rehearsals, so after every rehearsal, I had to write a reflection — any notes and any corrections — which was a good device for my progress,” Rogden said. “I had a mid-semester meeting with Caroline and Ann to just talk about the progress, and then I had a final meeting where I turned in my journals and then a reflection at the end.”

Whether rehearsing or just training, Rogden does some sort of aerial and dance work every day. Especially for aerial, Rogden said, even a few days can set you behind.

“If I don’t do my pushups in three days, I can feel it,” Rogden said.

Aerial-style training includes yoga, cardio workouts such as running, and lots of abdominal workouts to start. After this warmup, the dancers then go into upper-body work.

“So then we go into climbing the silks,” Rogden said. “We can do climbing to the top — one hand then move your feet (basically like climbing a rope in gym class) — and then we progress and do inverting, where you start with your legs and hook them on the silks. It’s a lot of abs and little muscles that you wouldn’t think to use.”

Rogden will perform in this year’s performance of “Clara’s Trip,” which will take place at the Booth Playhouse Dec. 7 through 9. She will perform the role of lead monkey, leading some younger Youth Ensemble monkeys. The monkey role involves static trapeze work that is different from flying trapeze which is often seen in circus acts. UNCC alum Marcia Fresquez will also be performing in the role of the fish.

Next semester, Rogden will continue her apprenticeship and be in two more company pieces. She will continue the apprenticeship into next year. After graduation, she has been asked by Calouche to continue working as a full-company member, but as of yet, Rogden is not sure about her future plans.

Rogden feels that aerial draws together audiences of all interests, working not only as a concert art form, but as a form of community engagement.