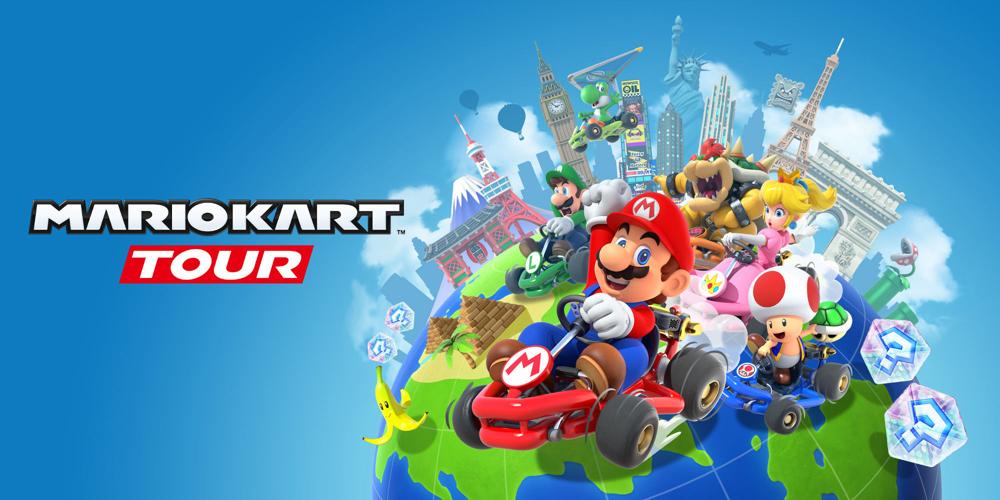 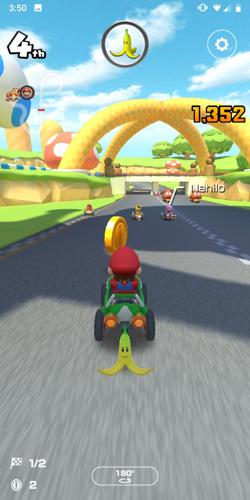 Burn some rubber while you check your email 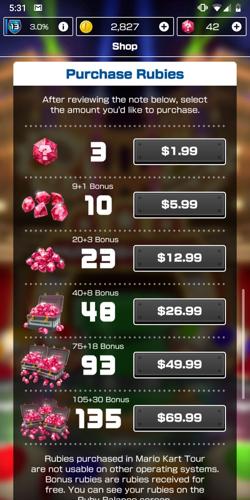 Ever since the release of “Miitomo” in 2017, Nintendo has been experimenting with the mobile gaming market, providing various titles that mostly serve as supplementary experiences to the ones found on the company’s dedicated gaming platforms such as the Nintendo Switch or 3DS. Past titles released in this vain include “Super Mario Run,” “Fire Emblem Heroes” and several others, which have mostly served as somewhat simplified versions of some of Nintendo’s most successful franchises. Enter “Mario Kart Tour,” the next entry in the wildly popular “Mario Kart” series and the newest game to join Nintendo’s smartphone initiative. So, the question then stands, is this game worth playing alongside, or even in place of, more traditional offerings such as Switch’s “Mario Kart 8 Deluxe?” Let’s start our engines, take our places at the starting line, and find out.

“Mario Kart Tour,” (much like Nintendo’s other mobile offerings) goes for a streamlined, no-nonsense interpretation of the main series’ gameplay. Upon starting the game, players are presented with a “Grand Tour” consisting of various cups which will allow you to take place in a variety of races and bonus challenges. Karts are set to drive forward automatically, leaving players with the tasks of steering/drifting and item management. “Mario Kart Tour” features a simple and easily accessible control scheme. Players slide one finger across the screen to steer in the direction of their swipe while items, (which, as always, can be obtained by driving through boxes scattered across the levels) are activated with a simple tap. The Smart Steering mechanic from Mario Kart 8 also makes a return as an optional feature, preventing younger or less experienced players from running off the track and into danger. Overall, this simplified control scheme feels less like a hindrance and more like a thoughtful approximation of how a game as hectic as “Mario Kart” could be effectively translated to a device as limited in capacity for precise inputs as a smartphone. The game operates entirely in portrait mode, and can even be played with one hand, making it a perfect fit for quick and easy play sessions during daily spurts of downtime such as bus commutes or waiting in line.

Regarding presentation, at the risk of sounding cynical, the mobile game market can sometimes seem overcrowded with cheap and tacky looking games that are clearly many steps below what is offered on any current-gen console in terms of sound, visuals and overall polish. However, these are all areas in which “Mario Kart Tour” shines. The visuals are crisp and amazingly sharp on my Google Pixel 3, sporting a lush color palette and updating at a silky smooth 60 frames per second, and while it may not reach the lofty visual standard set by “Mario Kart 8 Deluxe,” it still stands out as a prime example of how close mobile games can get to reaching console quality graphics. Similarly, the soundtrack, despite being mostly made up of remixes and tracks from previous “Mario Kart” outings, still makes for great listening, and long time fans will find a lot to enjoy in terms of previous songs making a return for this latest series iteration.

So, you may be thinking that this all sounds fantastic. A bite-sized version of “Mario Kart” that you can take in your pocket anywhere you go, play for a couple minutes at a time, and then move on with your daily routine? What could be better? “Mario Kart Tour” seems like a game that is primed to ride off into the sunset while victoriously waving the banner of a mobile game done right. But alas, there is one fatal flaw that undoes everything, that takes the shining potential that this game possesses and almost single-handedly mutilates it beyond all comprehension. When it comes to “Mario Kart Tour”, defeat, thy name is Monetization.

“Mario Kart Tour” is completely free-to-play. It’s a model that is becoming increasingly popular in both the mobile and console gaming space and one that has proven itself to be a perfectly viable practice for consumers and publishers alike in the past. When done correctly, free-to-play games allow fans to essentially invest as much or as little (of both their time and their money), as they feel is necessary to get what they want out of a game. If a free-to-play game impresses you or resonates with you in a particular way, then you may take it upon yourself to make an optional purchase here and there to support the game’s developers for what you see as a job well done. However, it goes without saying that free-to-play efforts tend to walk a fine line between being perfectly acceptable and going too far with what it expects the player to put in to get even the slightest returns. “Mario Kart Tour,” unfortunately, simply does not strike this balance, and while it is not the most egregious game I have ever seen in terms of being unfair or “pay-to-win,” there are simply too many flaws in the game’s pricing model, to the point where the overall experience is soured quite substantially as a result.

There are two currencies in “Mario Kart Tour.” Coins can be earned through completing races, completing optional side objectives, opening “Tour Presents” which you can earn as you progress through the various cups and by playing “Coin Rush” mode, which allows you to drive one lap around a track that is absolutely bursting at the seams with coinage and tasks you with picking up as many as possible. Rubies, on the other hand, are earned in far more limited quantities (mainly through the aforementioned Tour Presents and as level-up bonuses). Coins are primarily used to purchase various characters, karts, gliders and other supplies from the “Daily Selects” area of the in-game shop, whereas Rubies are used to receive one random character, kart or glider from a gacha-style chance minigame. Now, this setup in and of itself is not a bad thing, as many games before (including some of Nintendo’s own), have implemented a similar system in a perfectly reasonable and non-intrusive way, but “Mario Kart Tour” steps it up a notch, to the point where the monetization on display here stands as the very textbook definition of “pushing it.”

Every character, kart and glider is assigned both a rarity rating and a base score level, but the difference here is that these ratings have an astronomical effect on the gameplay to the point where certain races and challenges will be rendered simply impossible without the proper unlocks in your lineup. In any given race, players aren’t simply tasked with coming in first place, but rather the goal of each event is to earn the highest score possible. Placing high in the race standings helps with this, but your score is dependent on many other factors as well such as number of tricks performed and number of items used. After completing a race, players are then awarded anywhere from one to five stars based on their score, and the total stars that a player accumulates is what determines if they can move on to the next cup.

This is where things start to take a complete nosedive. Let’s take, for example, one of the game’s first events, a standard two-lap race on the “3DS Toad Circuit” track. Players are allowed to compete in this race using any combination of character, kart and glider that they wish. However, every event in the game has a select list of “favored items,” and playing with these items will grant you various bonuses, effects and multipliers which will, in turn, result in absolutely massive boosts to your event score every single time without fail. Taking the race mentioned above, playing as “Toad” while driving the “Mushmellow” kart equipped with a “Gold Glider” will provide you with three items per every one item box you run through, a 2x overall points multiplier for the points that you earn during the race, and an additional 3x points multiplier for points earned through stringing combos of various actions together. Playing as other combinations of parts that are not “featured” for this track will net you far fewer bonuses than this, or even no bonuses whatsoever.

Herein lies the problem. Nine times out of ten, you NEED these bonuses to have even a chance of earning enough stars to unlock more events in the Grand Tour. If you don’t happen to have the specific combination of character, kart, and glider that is favored for a certain event, then you may as well kiss your chances of getting a five-star score goodbye. This can lead to only one of two possibilities, either you decide to grind races you’ve already completed in order to earn coins and rubies to use to try and get the parts that you need, or you pay real-world money for more rubies to spend five at a time at the random gacha minigame (which can give duplicate items, by the way), desperately hoping to receive the right parts. Combine this questionable balancing in the gameplay with some of the most absurd prices I have ever seen in a microtransaction setting and the additional option to pay a ludicrously priced monthly subscription fee for a “Gold Membership” that earns you more rewards, and you have a recipe for complete and total disaster.

It’s this very monetization system that I’m convinced will spell doom for “Mario Kart Tour” in the eyes of many people who would’ve otherwise been frequent players. The fact that your chances of being successful are so incredibly low if you don’t happen to have the correct set of items, and that getting more could mean hours upon hours of grinding or coughing up way too much money, means that most players will probably just give up entirely the first time they hit a roadblock. Couple this with the fact that, at the time of writing, the game contains no multiplayer functionality whatsoever aside from online leaderboards, and I just don’t see many people finding a reason to keep coming back for more if they run into issues with the character system.

It’s such a shame too, because underneath all of this shameless cash grabbing is a fantastic game. Unfortunately, the well-constructed gameplay and gorgeous presentation simply cannot undo the absolute travesty that is this game’s monetization system. Ultimately, “Mario Kart Tour” doesn’t feel like an outright bad game, but it does feel like one that was undermined by an absurd and even outright greedy attempt at making money. If you have a high tolerance for grinding and don’t mind ignoring constant pleas for you to spend money, then by all means try the game out. But for those who were hoping for a true companion piece to something like “Mario Kart 8 Deluxe” on their iOS or Android device, I’m sorry to say that you won’t find it here.