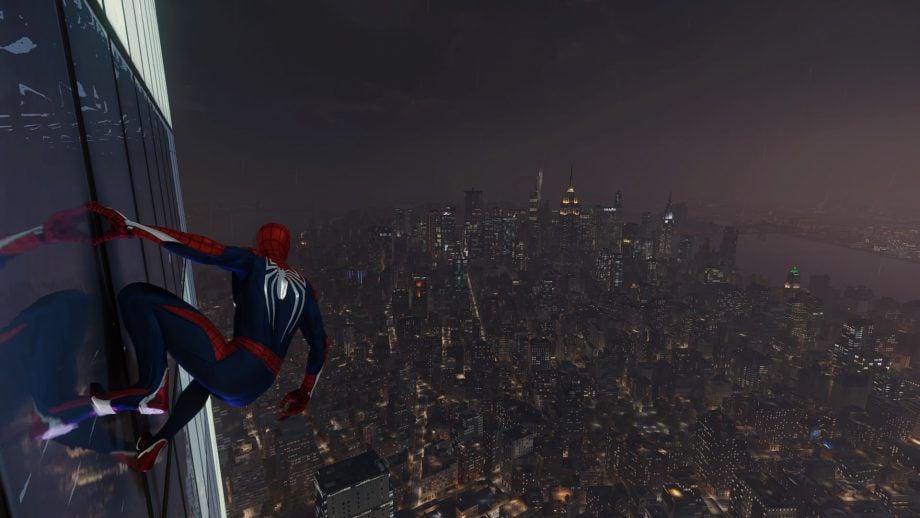 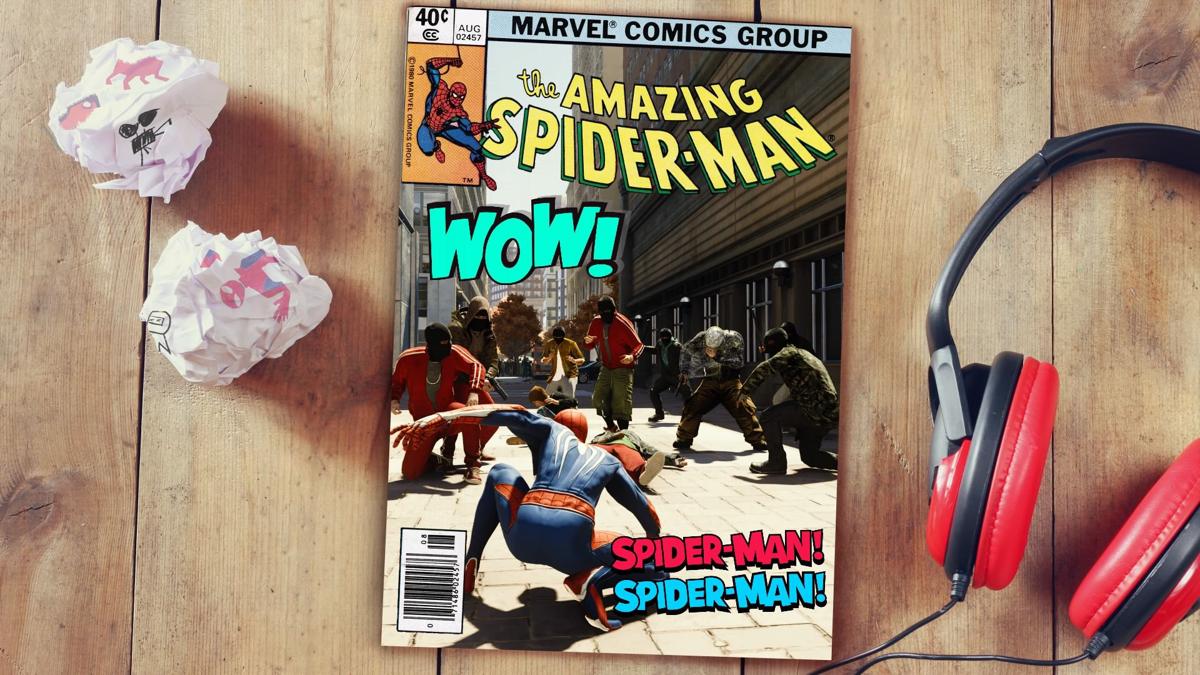 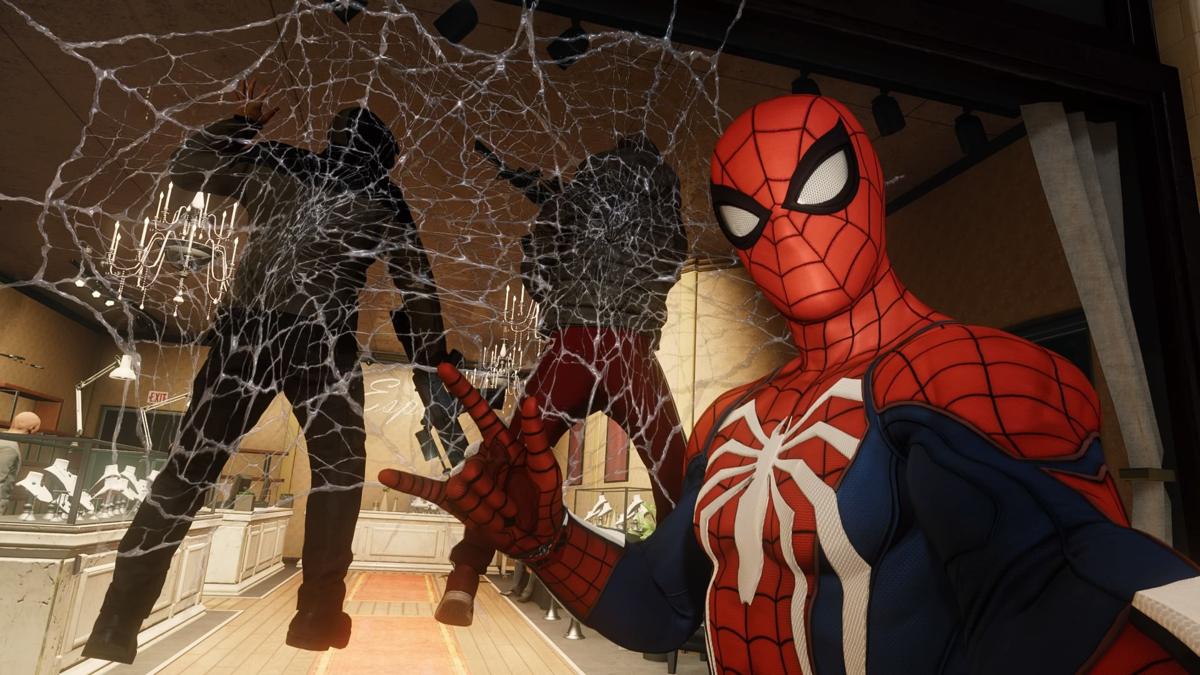 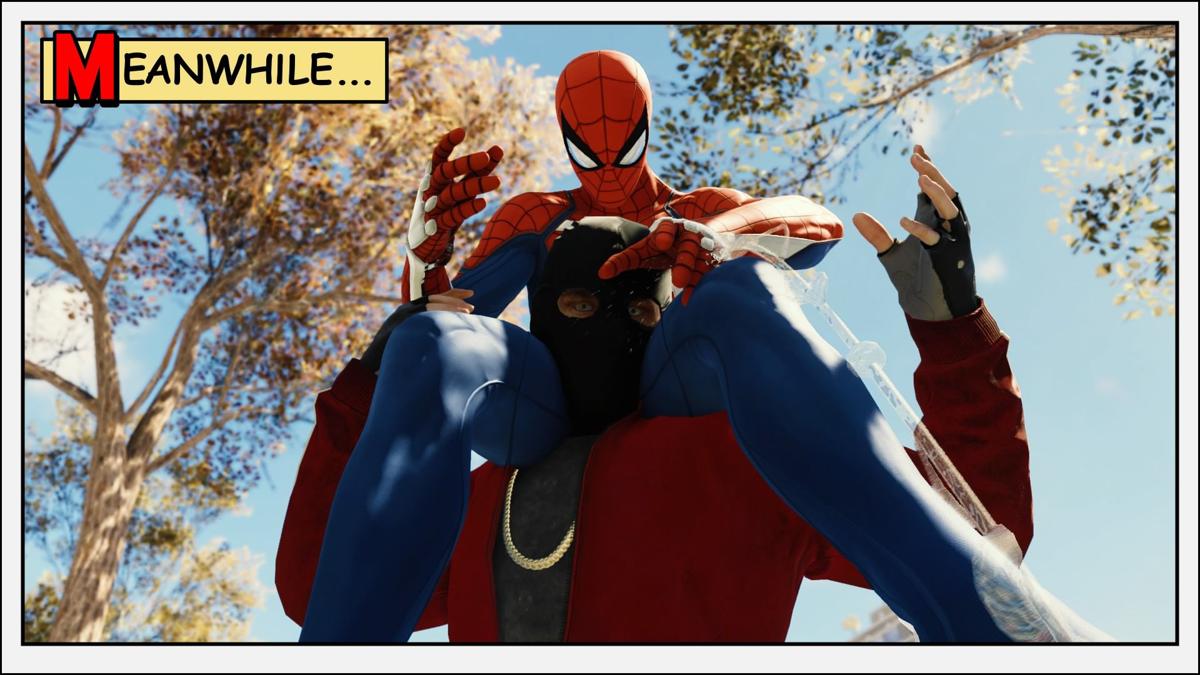 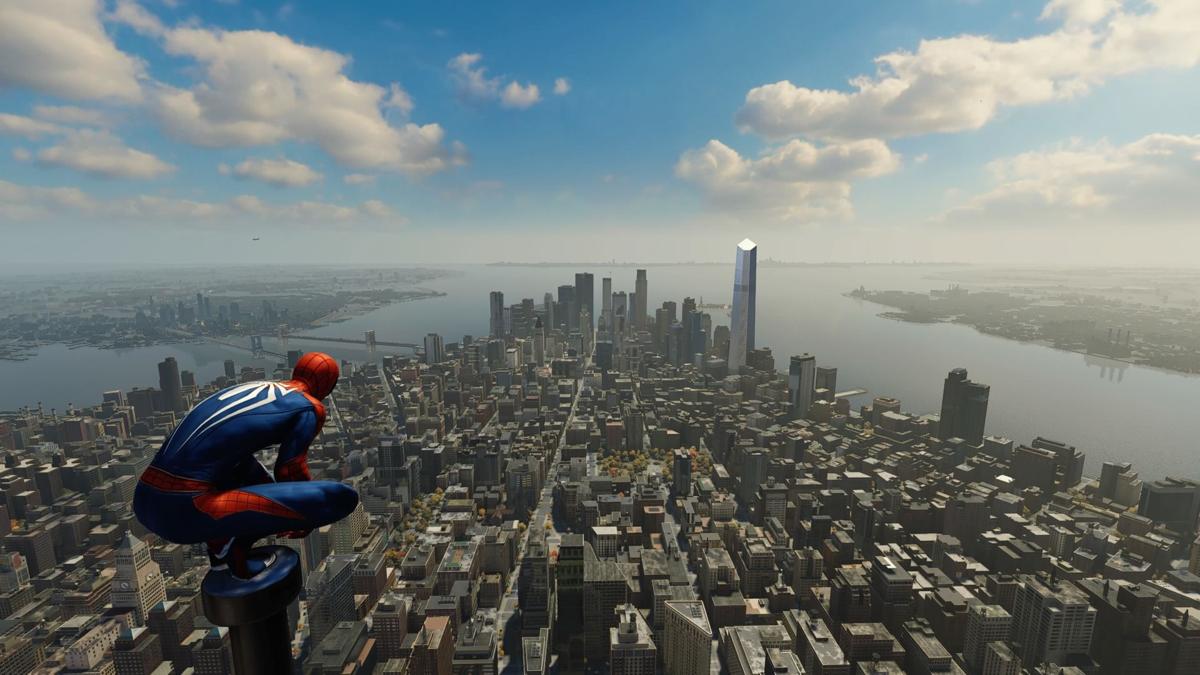 Warning: The following review contains minor plot and character elements from early on in the story.

The history of games involving “Spider-Man” is a long one, beginning with a modest title on the Atari 2600, which focused on the hero simply scaling a building to reach Green Goblin at the top. Jump forward to when the 3D-space was realized in games, where a number of “Spider-Man” centric games focused on trying to capture his staple web-slinging from building to building. Most tried and failed with this key mechanic, all but Treyarch, a studio tasked with creating a game adaptation of the film “Spider-Man 2” at the time. What set this title apart from the rest was its focus on having your webs attach to buildings rather than the sky, which also made use of a momentum-based system, and was ultimately a treat to play at the time. It was one of my favorite games growing up, and I distinctly remember standing in the EB Games at the time before its release, bewildered with what I was seeing in the demo as Spidey swung down from a building and began beating up a group of thugs. Looking past the nostalgia, the game’s traversal is still a neat attraction as are its humorous side quests and rude dialogue from New York citizens, but it fails to hold up like it once did in the long run. I bring all of this up because Insomniac Games has seemingly captured the heart of how fun I remember the game being in “Marvel’s Spider-Man,” but amplifies it to ten with its own unique flare added on.

The main pillar in ensuring a game’s success is, unsurprisingly, gameplay. You can craft a compelling story and a photo-realistic world to go along with it, but if it’s not fun to play, you likely won’t find players sticking around for very long. Like previously stated before in regards to a “Spider-Man” game, what people expect first and foremost is an engaging web-slinging mechanic. You want to imitate the adrenaline of what it would feel like to swing between two hulking skyscrapers, running along a wall or zipping through a pipe at a construction site. All of this, Insomniac flat out nails to a tee. No game before has matched a traversal system as free-flowing and outright fun as this one has accomplished. Zipping across skyscrapers and diving down to swing feels intuitive enough that you could pass the controller to anyone and they would have a good time with it. You’re given the entire island of Manhattan as your playground, which I often found myself mindlessly swinging through, negligent of any of the objectives or collectibles the game had placed in front of me.

The other half of the coin comes down to combat, another key piece to the “Spider-Man” game puzzle. When approaching fights, you have the option of starting stealthy or jumping right into the action. Stealth focuses on whittling down the group of thugs or henchmen’s numbers through silent takedowns, a web-based gadget like a trip-mine or tying them up from above, similar to how Batman does in the “Arkham” games. The man-to-man combat also borrows from “Arkham” in a way, but provides its own Spidey twist. If you attempt to brawl your way through enemies like Batman, you probably won’t find much success. Rather you need to take advantage of Spider-Man’s webs and gadgets to take down enemies. By the end of the game, when you have access to his full gadget wheel and your favorite suit power, the combat really clicks into place as you find a rhythm for beating up miscreants through both web and fist tactics, as well as an assortment of quips and name-calling from Spider-Man.

At certain points in the story, the game will give you a break from the action and put you in the shoes of a non-spidey character like Mary Jane. Most of these segments involve stealth and are a nice change of pace from the typical game flow. You also will take control of Peter Parker’s more scientific side which will have you completing two types of “science” based puzzles, which I found to be pretty fun. However, if you find the puzzles to be too difficult, the game does provide an accessibility option to skip them.

Besides the game’s traversal, the plot was where I was most interested in going after the game’s initial E3 showcase reveal. Much like “Spider-Man: Homecoming,” Insomniac has opted to bypass the web-slinger’s origin story, instead placing us in control of him about seven years after he becomes Spider-Man. The game starts off with the NYPD preparing to make the arrest of Kingpin with Spider-Man heading off closely behind to help out. This is about as much of the story as I’m willing to give away as I think this is something you will certainly want to experience blindly for yourself. Insomniac presents a strong narrative, and while I think its “twists” are mildly predictable, they constantly execute on the buildup to them and the moments themselves. There is a specific character dynamic between Peter and someone else, which I think the studio absolutely nails and carries on right into the games climax, all in a way I don’t think any mainstream format has covered before.

Of course, the main thing they need to nail is the Peter/Spider-Man relationship and I think they handle it in a way that feels familiar and fresh at the same time. Yuri Lowenthal plays the role and he captures the good-natured side of Peter along with the humble-yet-joking Spider-Man. He’s written and portrayed in a way that makes Spider-Man feel relatable as a hero and he never talks down or acts as if he is better than any of the people he is saving. One thing that I really appreciate about the game is they make Mary Jane, portrayed by the extremely talented Laura Bailey, a much more capable protagonist than any prior outings really make her. In Insomniac’s world, she is a reporter for the Daily Bugle, where she is often working in tandem with Spider-Man. Their relationship is explored in a way that is not too unique, besides their partnership, but culminates in a satisfying conclusion by the end.

Most of the key players you would expect in a “Spider-Man” story are here, such as Aunt May or Norman Osborn, but we are also given a look at some characters not often explored. Most prominent of these is Mr. Negative, someone who holds a close relationship with Peter before his early turn to villany. With the number of villains we have already seen in Spider-Man’s rogues gallery on-screen, it’s cool to see his powers and backstory get the spotlight shone on him. You also have J. Jonah Jameson in this story, though here he is a podcaster who carries on a tirade against the web-slinging menace while still holding a genuine love for his city. You’ll sometimes hear his comical rants as you zip through the city and they usually left me waiting before missions to finish listening to.

Since it’s open-world design, the City of New York that Insomniac has built is a technical marvel. Despite its gargantuan size, it is incredibly detailed throughout, featuring iconic real life locations as well as buildings and areas you would only get in the Marvel Universe. More so, it feels alive with how the traffic and pedestrians inhabit the streets below, with whom Spider-Man can interact with through high-fives, selfies, pointing finger-guns and more. The citizens will give off dialogue which pertains to recent in-game events, which only furthers your immersion into the game as well. You’ll also come across an assortment of random crimes in each district, whether that be thugs robbing a store or a group of terrorists driving a truck strapped with explosives down the busy streets of NYC. Besides the main missions, you will also find more activities to take part in, like tracking down backpacks from Peter’s past which hold mementos for more exploration on his backstory as well as chasing pigeons for a homeless man who has a deeper story to tell than you would think at first glance. There’s much more to do, but the main takeaway should be that you’ll never find yourself bored in between the downtime for missions.

Throughout the game you’ll also unlock more suits. These range from ones made specifically for the game to a number of outfits pulled from Spidey’s deep comic book and film history. At first, I wasn’t fully sold on the main suit designed for the game, featuring the unorthodox white spider, but as I saw it in action and played around with it, I loved the unique look they chose to make their incarnation of Spider-Man stand out. The game has a photo mode as well where you can angle up some great shots and make use of a bevy of filters, stickers, frames and photo settings to get that perfect shot. I usually don’t find myself making use of this feature in many games, but this one’s deep customization and array of shots to make in New York were tempting enough, which are the ones you see in this review.

Music is often one of the most underappreciated aspects of a game, which is a shame given how many studios often find a soundtrack that suits their game well. This title is no different, and the main theme feels at home with some of the cinematic Spidey scores but feels different enough to stand on its own. In key scenes, the music always matches the tone well and amps up the emotions you’re feeling during it. What never got old in my entire playtime was the orchestra kicking in with the game’s main theme each time you begin your first swing to the next destination.

Thanks to the Tobey Maguire “Spider-Man” films going on at the time, I was one of the many kids extremely in to “Spider-Man.” There’s something relatable to the image of Spidey that always stands out, whether it be an incarnation from Peter Parker, Miles Morales, Gwen Stacy or whoever else slaps on some web-shooters and fights crime. When I heard the studio behind one of my favorite platforms, “Ratchet & Clank,” was making the next “Spider-Man” game, it seemed like a match made in heaven.

Even with my high expectations, Insomniac exceeded them in telling one of the best “Spider-Man” stories from beginning to end, all on top of a game that is extremely fun to play and has a vast world to explore. They juggle the duality of Spider-Man and Peter Parker’s relationships and how it may go if it all began to fold in on itself. It’s no surprise why this game gets the Marvel fade-in graphic at the startup of the game, one of the few to get the company’s own stamp of approval. “Marvel’s Spider-Man” continues Sony’s hot-streak of killer exclusives and also stands as one of my favorite games of the console generation.