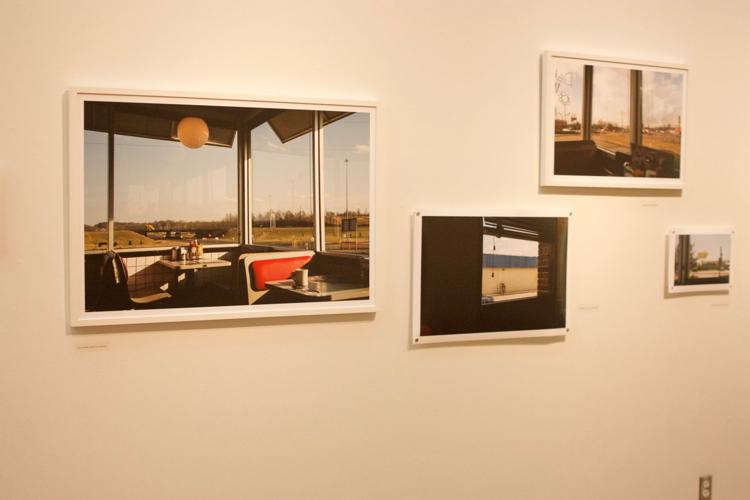 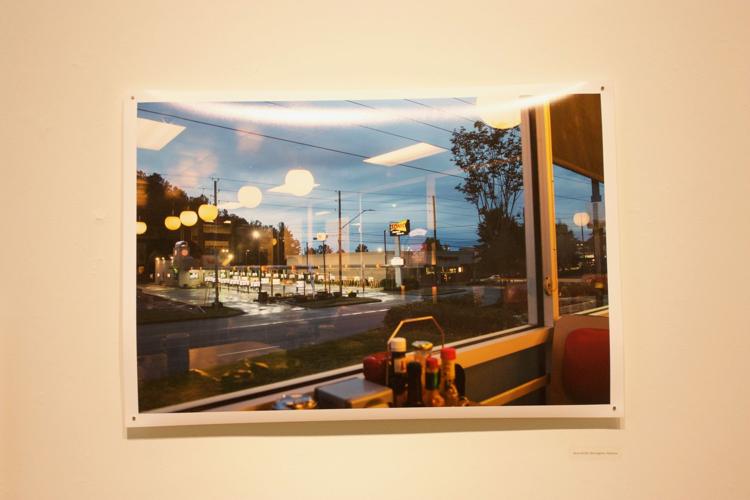 Thursday, Aug. 29 was the opening reception for Micah Cash’s “Waffle House Vistas” exhibit at Storrs Gallery. The makeup of the exhibit is exactly what the title suggests, photographs of different Waffle House locations. Cash himself says that the project “documents the landscape as seen through the windows of Waffle House restaurants across the Southeast.” It sounds slightly silly, but the project is incredibly smart. The pictures in the gallery provide an incredibly realistic portrayal of American life and can be used to talk about what race and class struggles in the South look like.

Cash began the project in March of 2018. He visited over 60 Waffle Houses, usually visiting multiple locations in a day. In every photograph of Waffle House, Cash followed a set of rules that he defined for the project in order to capture a sort of realism in the photographs. Pictures were always taken while seated. Pictures were always taken from whatever seat the Waffle House employee directed him to. There was no moving around or adjusting in order to get a better shot. There’s nothing artificial about these photos. Nothing was planned. This is what really makes the exhibit shine. The images are so real and descriptive of the normal lives of people in normal towns. The pictures are incredibly captivating in their mundanity.

Waffle House is a safe and comfortable place for everyone, which is one reason Micah Cash chose the establishment for this project. Waffle House is deeply entwined with Southern culture, especially the lower class. During the reception, Cash referred to the “architecture of poverty,” specifically the “poverty that hides in plain sight.” The landscapes seen through these Waffle House windows are littered with McDonalds, gas stations and cheap motels. Cash says that these views show income inequality in America. Waffle House is not a place for the one percent, and these photographs show it. These photos suggest class struggle and tell the story of the hardworking 21st century American.

One of my favorite pieces in the project is a photograph titled “Store #1655: Monroe, North Carolina.” This one photograph perfectly encapsulates the essence of the project. The photo is from the corner booth of the Waffle House, with the top of the booth in the foreground and slightly out of focus. Outside the window are a few layers of strip mall signs, and some sort of fast-food restaurant across the parking

The simplicity of the project and the factual nature of these photographs force the viewer to consider their place in these images. There is nothing incredibly flashy or showy about these images; they depict real life. And that is what makes them so important. Cash talks about how Waffle Houses are “exactly the same wherever you go.” If you look at the photographs in this project, you will see things like the red vinyl booths and the iconic glowing globe lights; things that anyone who has been to a Waffle House has definitely seen. This makes it incredibly easy to imagine what it feels like to be in both a Waffle House in a small town in Mississippi and the Waffle House near the UNCC light-rail stop. Cash said that he wanted to use the sameness of the Waffle House archetype to emphasize the differences between individual people. We are all different people, living different lives, but we all have the shared experience of eating at Waffle House. As Cash puts it, Waffle House is a “common denominator” when looking at the complexities of race and class in Southern America.

“Waffle House Vistas” will be on display in Storrs Gallery until September 20th.