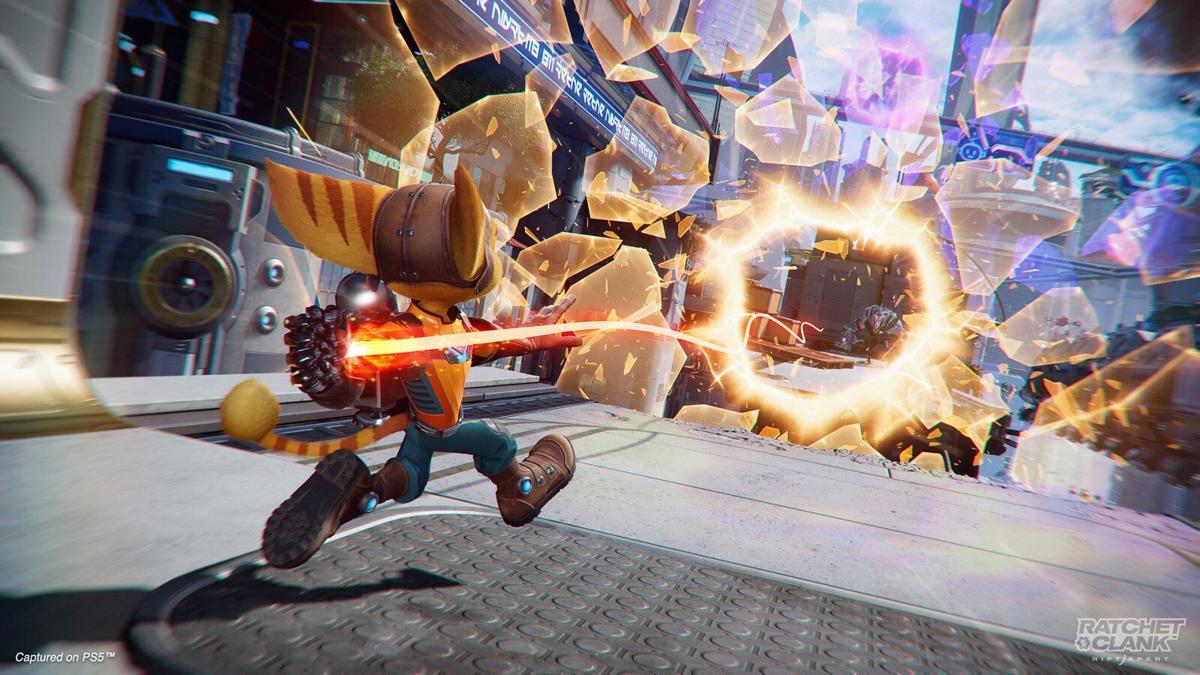 Blasting Holes in Reality Itself 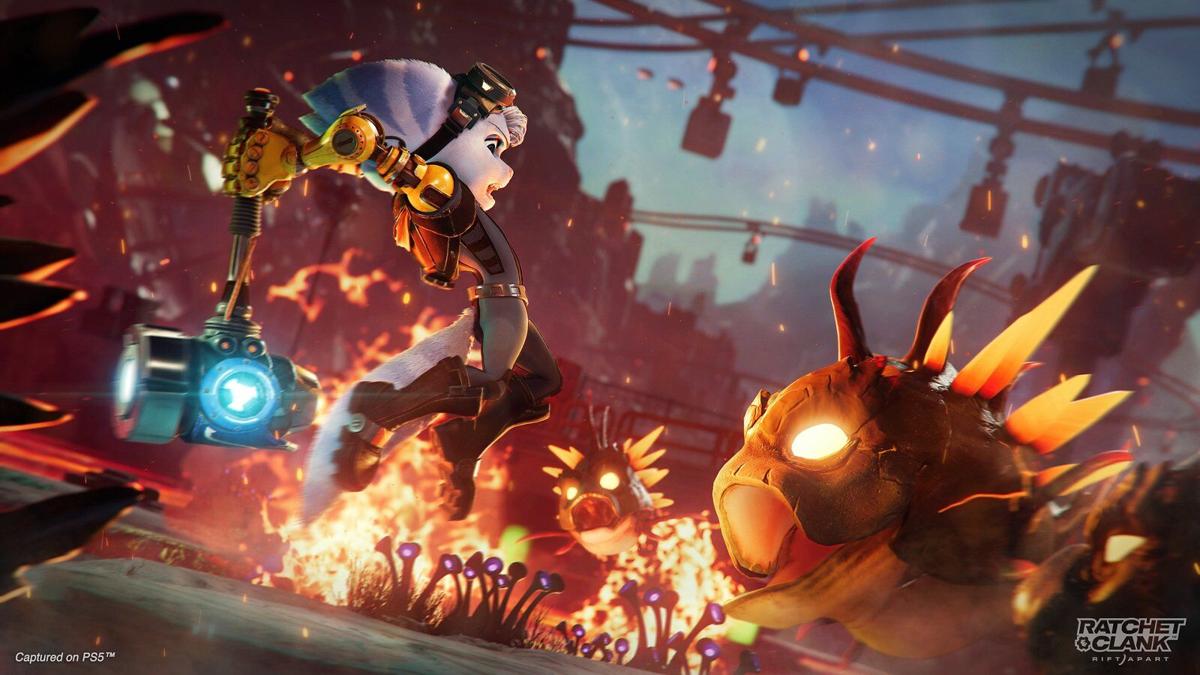 Rivet Vs. The World

Blasting Holes in Reality Itself

Rivet Vs. The World

Insomniac Games has proven themselves over the years as one of Sony’s most dependable and stand-out development partners. From the original “Spyro the Dragon” trilogy on the first PlayStation to the blockbuster “Marvel’s Spiderman” on PS4, Insomniac has been responsible for some of PlayStation’s most memorable titles. “Ratchet and Clank” is Insomniac’s longest-running franchise today, making an appearance on every Sony home console since the series’ debut on PS2 in 2002. Nearly two decades later, Insomniac has brought everyone’s favorite galactic crime-fighting duo into the next generation of gaming with “Ratchet and Clank: Rift Apart” on PS5. They showcase a graphical upgrade, new sprawling landscapes to explore and new gameplay possibilities courtesy of the PS5’s updated hardware.

We open on our dynamic duo attending a sort of “Anniversary Celebration,” wherein the citizens of Megalopolis City are recognizing Ratchet and Clank for their heroic deeds and service to keeping the galaxy safe. However, things quickly go awry when Dr. Nefarious shows up on the scene with a device known as the Dimensionator. The Dimensionator is capable of opening rifts in the fabric of time and space itself, and Nefarious pulls Ratchet and Clank into an alternate reality where he has already asserted himself as an all-powerful dictator. Now, it’s up to Ratchet, Clank, and some familiar interdimensional faces, to stop Nefarious and set the natural balance of the dimensions back in order.

This story set-up initially seems like perfect Saturday-morning cartoon fare, and in some ways, it is. However, that’s selling it a bit short, as despite the somewhat simple premise, “Ratchet and Clank: Rift Apart” can deliver a surprising amount of heart and character over its 10 to 12-hour runtime. As Sony has been hyping up, Ratchet indeed comes into contact with another Lombax (the species of creature Ratchet is) known as Rivet. Rivet is a fantastic character, and she brings the story in some surprising directions. I may still personally prefer Ratchet and Clank personality-wise, but that is not to take away from the brilliant characterization of Rivet and the other new faces introduced here. Speaking of which, the writing and voice acting is generally fantastic across the board, lending the game the feeling of an interactive, high-budget animated film, which is greatly appreciated.

Gameplay is largely a continuation of what fans have come to expect from the “Ratchet and Clank” series. Players navigate their way through several environments, tackling platforming challenges and fighting waves of enemies with various creative and cartoony weapons. While the general structure is mostly the same as previous titles, there is a level of polish and grandness that was not present before. The game’s many action set-pieces are more jam-packed than ever by forcing players to jump their way across crumbling structures or deftly maneuver through an enemy onslaught. Ratchet and Rivet are both well equipped to fight back, as they will find themselves carrying some of the most interesting and creative weapons Insomniac has ever conceived. Combat in “Ratchet and Clank: Rift Apart” is simply fantastic, and the experience is enhanced even more by way of some of the PS5’s shiny new features.

That leads me into perhaps the most impressive part of “Ratchet and Clank: Rift Apart,” which is just how well the title demonstrates what the PlayStation 5 can do. Visually, the game is stunning. I opted for the Performance mode for my playthrough, which delivered an incredibly sharp picture resolution at a rock-solid 60 frames per second. Despite this mode reportedly “toning down” certain visual features related to things like lighting and scene density, the game managed to look stunning all the way through. While not exactly the most memorable, the soundtrack was at least very fitting for what the game needed, being able to cover chaotic action scenes and slower, more emotional moments. The game also makes by far the best use of Sony’s “DualSense” controller of any title I’ve played so far. Haptic vibration allows you to feel everything from Ratchet or Rivet’s footsteps to the Giga-ton blast of a massive laser cannon in shocking detail. In addition, the controller’s adaptive triggers provide different feedback for each weapon a player finds. While not essential by any means, it’s these kinds of small details that really help sell the experience to the player. Insomniac should be proud that they could use Sony’s technology to its fullest potential.

Unfortunately, there are a few things that keep “Ratchet and Clank: Rift Apart from being a perfect experience. For one, the game attempts to insert a few wider, pseudo “open-world” segments into the game, and these end up as the weakest points of the experience. Wide open playgrounds are certainly “on-trend” right now, but if you ask me, Insomniac’s strengths seem to lie in creating tightly-packed linear gauntlets of platforming and combat challenges. The game has these moments in spades as well, but the problem is that they make the relatively flat and barren open segments feel that much duller in comparison. What’s more, the game hasn’t made it out entirely free of technical issues either. The game is by no means broken or unplayable, mind you. Still, I did experience two instances of temporarily unable to continue due to glitches, requiring a full reset of the PS5 to get things up and running again. Thankfully, we live in an era where any lingering issues are likely to be worked out over time in free updates.

“Ratchet and Clank: Rift Apart” is another great entry in a long-standing franchise that is sure to please longtime fans and newcomers alike. The graphics are outstanding, the story can be surprisingly gripping at points and the gameplay has been polished and refined to an astonishing degree. The soundtrack may be a tad generic, and the more open-ended segments can occasionally slow the game’s pace to a crawl, but the game’s best moments are so spectacular that it is well worth sticking through some of the slower parts. This title is yet another solid effort from Insomniac, and I can’t wait to see what the studio sets its sights on next.