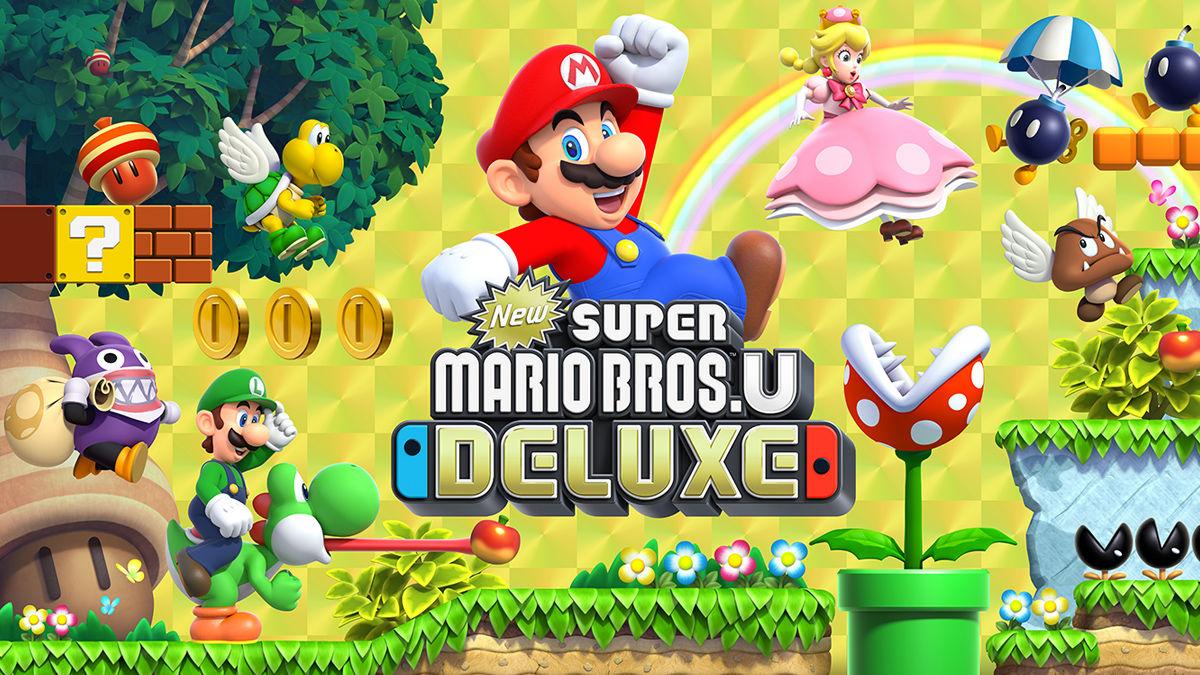 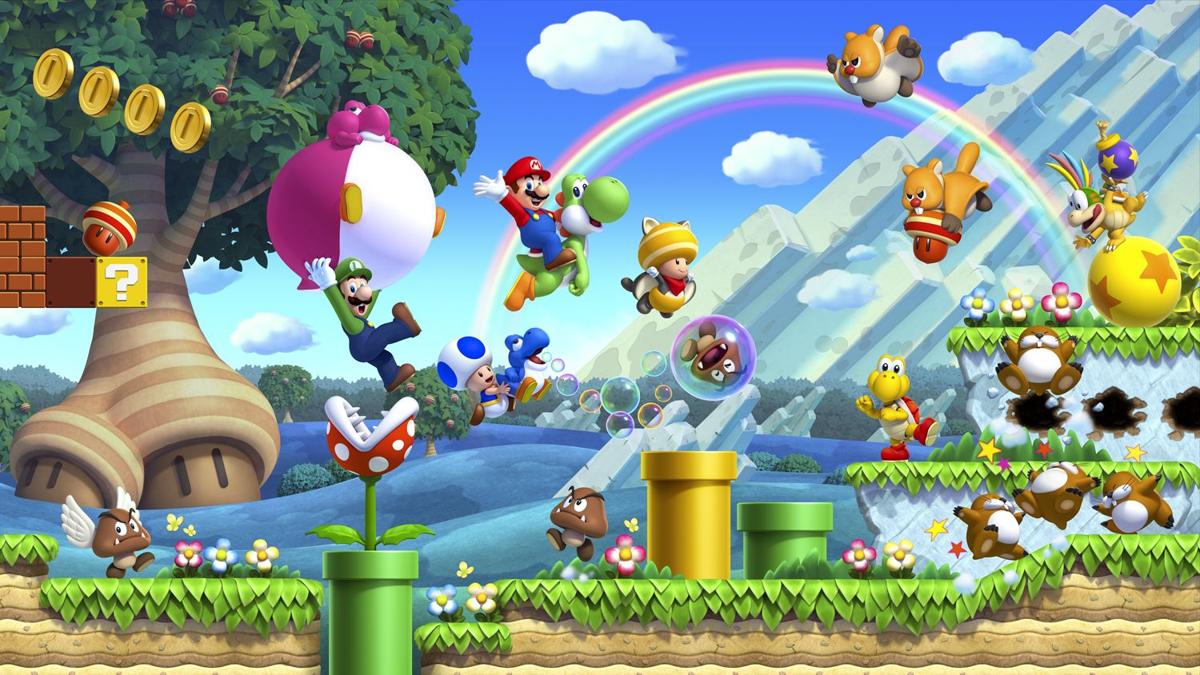 Remasters, reinvisionings, ports and re-releases. Whatever term is used to describe it, the act of taking previously released games and introducing them to a new audience through a new platform is becoming more and more common in today’s gaming landscape. While some would argue against the idea of taking what is old and attempting to pass it off as new, the fact is that re-releases can, when done right, take a game that may have had trouble finding a market upon its original debut and give it a second chance at success. However, while these games are often given the moniker of “Deluxe” or “Definitive Edition,” some of them may not do enough to differentiate themselves from the original outing, and some even end up worse off than they were to begin with. So, without further ado, let’s-a-go into both releases of Nintendo’s “New Super Mario Bros. U.”

Coming at a time when a good number of people were starting to become fatigued with the whole “New Super” series, “New Super Mario Bros. U” was perhaps not the best choice for Nintendo to bill as the Wii U’s big “killer app” launch title. Arriving mere months after the release of “New Super Mario Bros. 2” on the 3DS, which was already criticized for feeling too bland and similar to past games in the franchise, gamers were not exactly thrilled to see yet another title that looked and played almost identically to what had come before. With this release, it felt as if the team at Nintendo EAD were more than happy to simply iterate, when what fans really wanted was to see them innovate.

While the initial trailers certainly didn’t do the game’s art direction any favors, things came together a little more smoothly during actual gameplay. While the game may have looked a little too similar to “New Super Mario Bros. Wii” for some, there had been a subtle, yet defined jump in the overall presentation of the game and its world. For starters, being on the Wii U allowed for the game to have more fleshed out and complex background art for its various stages, which helped a lot in pushing some of the areas away from the dull and stagnant appearance that past entries had been criticized for. Taking this together with the push to an HD resolution for the first time in Mario’s history and the rock-solid 60 frames-per-second performance benchmark, this entry was able to take a tired art style and give it its best showing so far. The result was a game that, while still not to everyone’s taste in the visual department, did a decent job at highlighting the style’s strengths and diminishing its weaknesses.

As always with "Mario" games, though, gameplay remained at the forefront. By and large, the general feeling and controls that veterans of the “New Super” games had come to know remained unchanged in this entry, barring a slight adjustment to the physics which left things feeling just the slightest bit snappier and less floaty than before. Control was never an issue with these games, and “New Super Mario Bros. U” handles just as well, if not slightly better, than those that came before it. However, where the biggest difference comes is in the level design. While the concept for the game itself may have felt incredibly safe and by the numbers, the level designs on display here go in the complete opposite direction. The "Mario" series’ trademark tendency to introduce a major level gimmick for only one or two stages, only to be thrown away to make room for the next idea is in full swing with this game’s stages, and almost no two levels feel alike as a result. Sure, the game serves up the same standard 2D platforming fare that players had come to expect at the time, but the environments Mario makes his way through this time are what bring this game the creative edge that some fans felt the previous entries lacked. From jumping across stars in a snowy night sky, to swimming through Dragoneel infested underwater caves and even jumping through a twisted classical painting, the stage concepts presented here pack a level of charm and creativity that most players would expect to see from a developer with the long and illustrious track record Nintendo carries.

This tried and true (almost to a fault) gameplay style is supplemented further by an incredibly healthy amount of content, and a few Wii-U focused features to boot. The game not only boasts 80+ stages in the standard Adventure Mode, but also includes various one-off challenge levels and side modes. These challenges include anything from time-trials to enemy gauntlets, and will easily add a couple more hours on to the game’s already respectable runtime. Not all of these bonuses are so compelling though, as one Gamepad focused mode sees up to four players making their way through stages as normal while a fifth player uses the Gamepad’s touchscreen in order to instantly place platforms in the world. It’s an idea that seemed to have potential on paper, but the execution here results in a gameplay experience that often either feels insanely chaotic or leaves the gamepad player feeling detached from the overall experience. Even though some of these side modes miss their mark, their addition is still welcomed overall, as they helped to introduce some much-appreciated longevity that was seemingly sorely lacking from some past entries.

Hitting the market in early 2019 exclusively for Nintendo Switch, this “Deluxe” release of the original “New Super Mario Bros. U” adventure had a lot of advantages over the first run simply in its timing. For example, at the time of the Switch version's release, there hadn’t been a full 2D "Mario" game released for over 6 years (“Super Mario Maker” notwithstanding) and many fans were feeling much less saturated with Mario content in general. Couple that with the fact that the Switch was already selling circles around the Wii U at the time, and it seemed as if the game would finally get the chance to shine on a platform that could truly allow it to generate buzz within the general gaming community, rather than merely existing within the confines of a criminally overlooked console’s rather dusty library of titles.

As for the game itself, most of the content found within remained largely unchanged from the previous version, barring a few minor upgrades here and there. Image quality, for example, was given a boost from an already serviceable (if not exactly mind-blowing) 720p resolution to a full native 1080p in TV mode, while maintaining parity with the Wii U original when playing Switch as a handheld. This helped to make what was already a crisp and vibrant game stand out that much more and left the game’s entire presentation feeling like a subtle, yet still appreciated upgrade over the original release. Strangely, one piece of content that failed to make the jump to Nintendo’s next-generation platform was the Wii U original’s Gamepad mode, which has been dropped entirely from the package this time around. Given the asynchronous multiplayer that was involved in the mode, it’s hard to see how the original concept could have effectively been translated to Switch’s more conventional display, but to see any sort of content outright removed in the new release is odd nonetheless.

Thankfully, there are many more additions that give the Switch version of the game its own merits. For starters, the entirety of the “New Super Luigi U” DLC expansion is included on the cartridge in this release, effectively doubling the game’s stage count upfront over the original before the DLC’s launch. The game also retains the original’s challenge modes including an all-new “Boost Mode.” This serves as a replacement for the original release’s Gamepad mode, and sees players trying to collect as many coins as possible in autoscrolling stages that progressively become faster and faster the more coins the player collects. It’s nothing too groundbreaking, but it does at least serve as a worthy alternative to the content available in the previous version. In addition to the challenge content, the “Deluxe” release also features brand new playable characters. Toadette and Nabbit both show up as choices for the game’s multiplayer, and they each bring a number of unique properties along with them. Toadette, for instance, has access to unique powerups and abilities, while Nabbit is completely invulnerable to enemy attacks. The game does explicitly state that playing as Toadette or Nabbit will result in an overall easier time. While some may say that this removes some of the fun and challenge from the gameplay, the characters make great jumping-off points for less experienced or younger players to try out the game.

Otherwise, the two releases remain largely identical. The biggest change regarding control comes in the form of a mid-air spin move that players can execute in order to give a little extra hang time to their jumps. In the original Wii U release, this maneuver was mapped to the ZR button. On Switch, though, it has been changed so that now pressing the jump button while in the air executes the move. Initially, having this spin move on the same button as Mario’s standard jump seemed like it messed with the flow of the gameplay, as I would find myself spinning constantly without meaning to. However, after about an hour, it began to grow on me. Once the learning curve is passed, I started to find that having such quick access to the spin move was actually helping me to more accurately time exactly where in the arc of my jump I wanted to spin and gain the increased hang time. Put more simply, after some trial and error the move soon started to feel much more like a help than a hindrance.

Ultimately, “New Super Mario Bros. U” is sure to make for an enjoyable time no matter which form you find it in. The original Wii U release was a solid effort to be sure, but it’s not exactly hard to see why it didn’t make the biggest impact on gamers at the time. Likewise, even the release of “New Super Mario Bros. U Deluxe” on the Switch didn’t exactly feel like a bombshell. However, whether it be due to the Switch’s overall monumental success or the fact that it came out into a much different market, a quick look at the sales figures shows that this game has most certainly found more staying power on Nintendo's hybrid machine. Personally, I would say to go for that version as well. The absence of the original’s Gamepad mode is more than made up for by the portability, cleaner visuals, additional modes, DLC inclusion and brand new characters. The Wii U version also makes for a fine experience. However, simply based on the fact that physical copies of the original release (and Wii U Consoles in general) are becoming harder and harder to find, Switch is likely the way to go for convenience’s sake alone. Overall, I would recommend giving this game a shot. Yes, us Nintendo fans all love to hate the “New Super Mario Bros.” series, but this one might just be a little more “Super” than the rest.