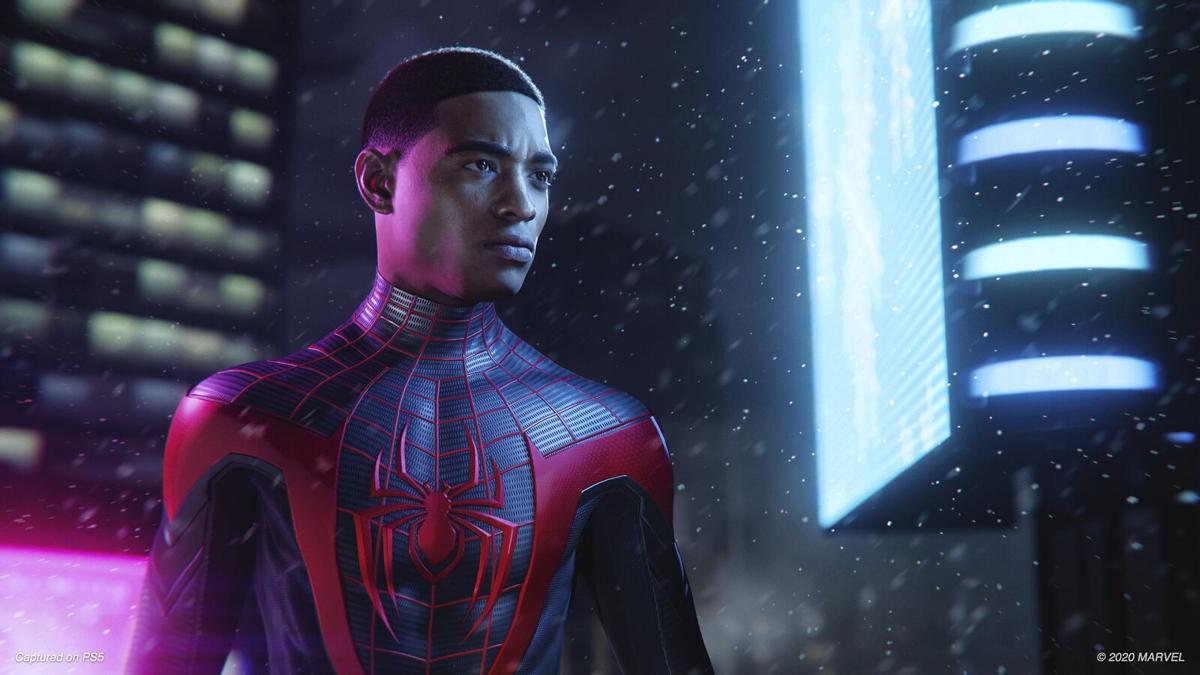 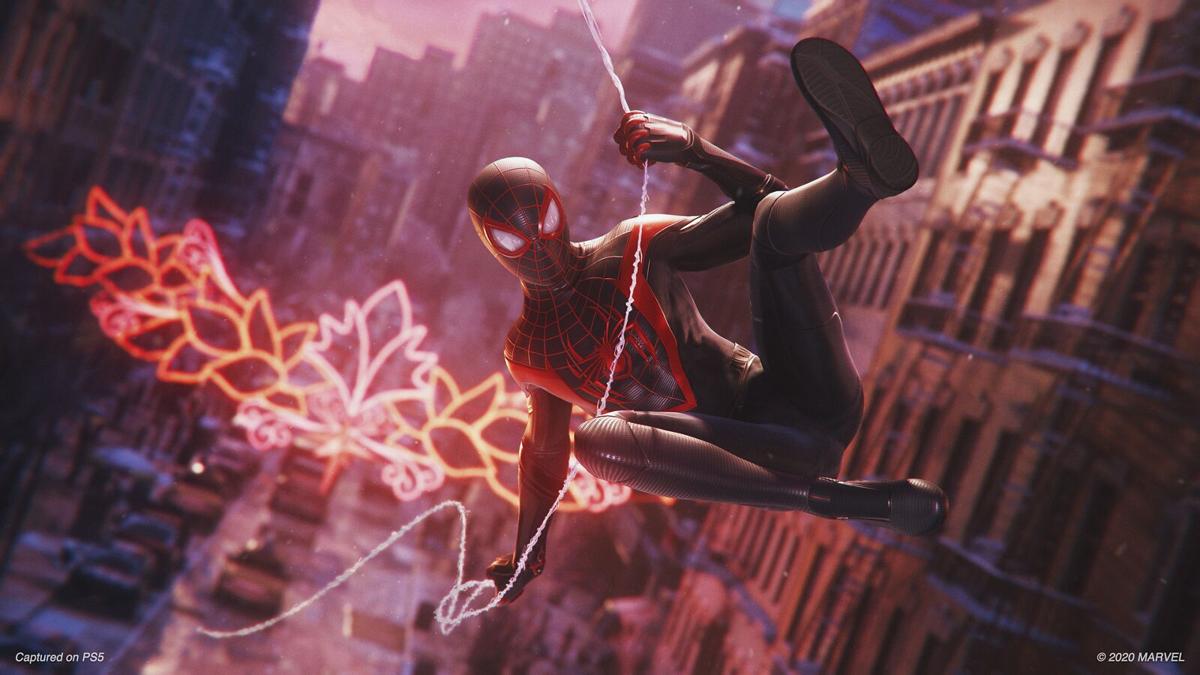 I’m not always the biggest fan of open-world games. Sure, the freedom lent to the player by this genre is unmatched anywhere else in the gaming landscape, but there usually has to be some other gameplay wrinkle aside from just exploration to get me truly invested. That being said, Insomniac Games’ “Spider-Man” game on PS4 was one of my favorite games of the last generation. Though I had my issues with the title, it was the silky-smooth controls, punchy yet strategic combat, and vast upgrade system that kept me swinging away through the game’s rendition of Marvel’s New York City. So, fast forward to 2020, and Insomniac is back with a follow up focusing on none other than Miles Morales, who has been growing quite a following among Spider-fans in recent years. Released alongside the PlayStation 5 as a day-one launch title, the aptly-named “Spider-Man: Miles Morales” seeks to tell a new and unique story while providing an updated take on the gameplay that so many players fell in love with two years ago.

While Insomniac has certainly been hard at work updating and tweaking their pre-established Spider-Man gameplay for this new title, one thing that has remained remarkably consistent here in “Spider-Man: Miles Morales” is the stunning presentation. The game offers several different graphical settings and options, but no matter which one players choose, they’ll almost surely walk away thoroughly impressed. Miles Morales, Peter Parker and the other main characters are genuinely some of the most detailed and life-like human character models I have ever seen in a video game, and even the background NPCs walking around the streets of Harlem look a cut above the rest in terms of graphical fidelity. Add to this ray-traced lighting effects, almost nonexistent loading times, crystal clear image quality, and a rock-solid framerate, and players are left with a truly stunning visual treat in Insomniac’s latest effort. The whole package is topped off by a fantastic soundtrack consisting of everything from mood-setting rap tracks to sweeping, orchestral pieces reminiscent of the MCU movie series.

This exceptional audio-visual package is also supported by an engaging story packed full of stand-out writing and delivery. Perhaps the higher power of the PlayStation 5 hardware can support more accurate and detailed motion capture. Perhaps it's the combination of higher-grade visual detail and fantastic voice tracks. Perhaps it’s just my imagination. Whatever the case, the result is a story that is presented in a way that approaches an MCU film in terms of quality. To diverge into movie review territory for a second, nearly every main character in “Spider-Man: Miles Morales” delivers cinema-worthy acting, and everything from hard-hitting emotional moments to campy super-villain monologues translates through the motion-capture beautifully. Furthermore, the story is also incredibly well-written, showing a bit of a different side of the traditional superhero story that we are so used to seeing. Setting up Miles as a sort of protégé to Peter Parker after discovering his Spider-powers at the end of 2018’s game, players witness Miles fight to overcome his insecurities and lack of experience as he finds out what it means to have the weight of an entire city resting squarely on his shoulders. This creates an incredibly novel dynamic in which players get to see Miles grow and mature constantly throughout their playtime, both in gameplay through unlocking new abilities and modifiers as Miles levels up and through watching Miles’ character growth throughout the game’s cutscenes. I haven’t reached the end of Miles’ adventure at the time of this writing, but I can say that the game’s story has succeeded in pulling me into the world and helping me connect with the characters, and I can’t wait to see how the different plot points and character arcs come together in the end.

So, that leaves us with the gameplay, which I am pleased to report also doesn’t disappoint. Similar to the first game, “Spider-Man: Miles Morales” consists of a healthy mixture of open-world exploration, platforming, combat, and stealth. Players will often be presented with a tense situation, such as a room full of enemies that have to be dealt with or a series of bombs that have to be disarmed under a time limit, but there are generally multiple ways to complete any one task. You could zip your way up into the rafters, grabbing unsuspecting enemies with your webs to knock them out while staying hidden, or you could go headfirst into the fray and attempt to force your way through, both of which are perfectly viable options. Basic combat is more or less copied from the original title, with Miles being able to string together basic combos, dodge out of the way of enemy strikes or projectiles, and use a variety of gadgets and traps to help him maintain an edge on his opponents. The main new wrinkle here comes in the form of Miles’ “Venom Powers,” which allows him to use his bio-electric abilities to stun enemies, power machines and more. Combat was one of my favorite parts of the original “Spider-Man” title, and the same holds true here. The traversal controls can occasionally be a bit finicky, leading to frankly hilarious situations such as me being spotted by an entire room full of enemies after falling off of the top of a bookshelf, but nitpicks aside beating up bad guys is as satisfying as ever in “Spider-Man: Miles Morales.”

The other main focus of the gameplay is traversal and exploration, which has been greatly streamlined over the original game. This is primarily due to the overall smaller size of the game’s map, but this is certainly not a complaint in my book. I’m a fan of exploration in general, but one thing that I am most certainly not a fan of is bloat, which is a trap that I feel open-world games fall into far too frequently. By keeping the scale of its world in check, “Spider-Man: Miles Morales” delivers the freedom and sense of adventure that open-world design provides without falling into a sense of pointlessness or repetition. Fewer side quests and collectibles are cluttering the map at all times, which let me feel like I was more able to focus on the ones that were there without feeling overwhelmed. Make no mistake, there’s still plenty of content to dive into with “Spider-Man: Miles Morales,” but the developers at Insomniac were careful not to include so many random tasks that players would burn out before reaching the end of their journey.

Ultimately, I have thoroughly enjoyed my time with “Spider-Man: Miles Morales.” Insomniac Games has really outdone themselves here, producing a distinctly next-gen experience that not only showcases the updated tech under the hood of Sony’s latest console but also backs up that tech with a wonderfully written and professionally acted story. “Spider-Man: Miles Morales” definitely deserves to be on the radar of any early adopters of the PlayStation 5, whether you played the original or not, and I can’t wait to dive back in and reach the conclusion of Miles’ journey towards becoming a true superhero.