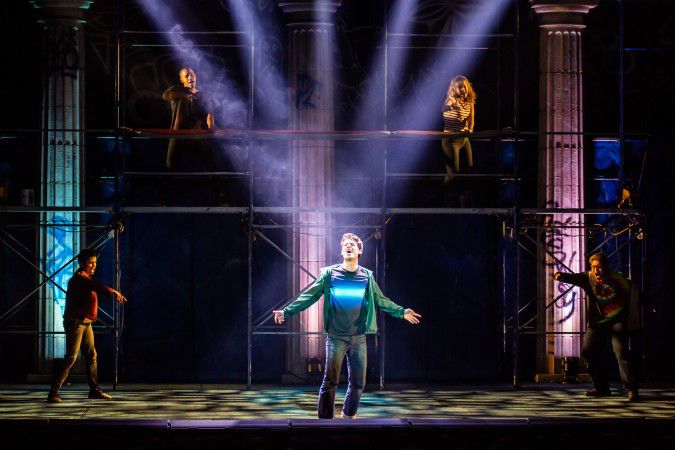 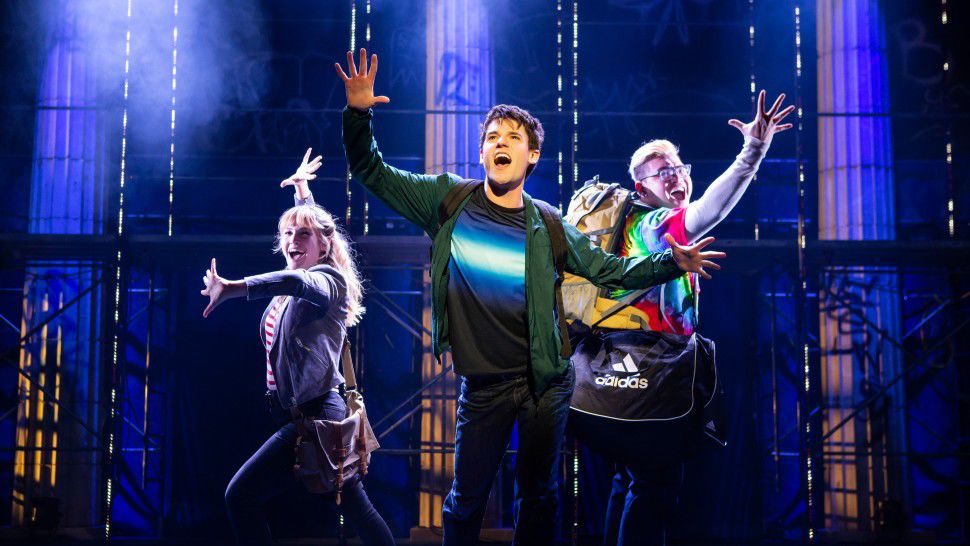 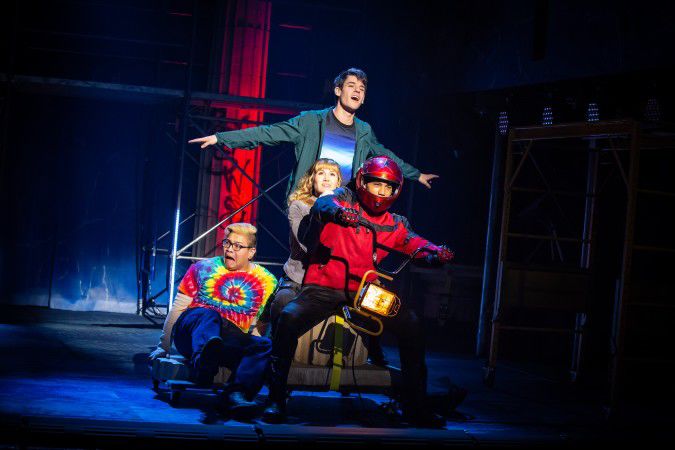 “Look, I didn’t want to be a half-blood.” This is how “The Lightning Thief,” the young adult novel from 2005, begins its story. It is also the first sentence the titular character sings in “The Lightning Thief: The Percy Jackson Musical;” an exciting start if there ever was one.  It tells the story of Percy Jackson (Chris McCarrell), a twelve-year-old boy from New York who struggles with ADHD and dyslexia, constantly expelled from one school or another. He is angry, frustrated and struggling with feeling abandoned by his father. That is until he discovers there might be another explanation for his struggles: he is the demigod son of Poseidon. Thrown into the world of the Greek gods, Percy learns he must go on a quest to find Zeus’ stolen lightning bolt before the world breaks into chaos. What ensues is a tale of high-stakes adventure, teenage angst and the importance of friends and family.

The “Percy Jackson” series holds a special place in my heart. It is, without a doubt, the book series I loved the most in middle-school. I had a box set of the novels, skipped class to go to a book signing and proudly cosplayed Annabeth Chase. After the movies largely failed to capture its magic, it would have been easy to warily avoid another adaptation (although the Facebook post I made in 2014 when I found out the musical existed: “THERE IS A PERCY JACKSON MUSICAL GOING ON IN NYC I REPEAT THERE IS A PERCY JACKSON M U S I C A L. #IHAVEANEWLIFEDREAM” proves I never would have avoided it). However, “The Lightning Thief: The Percy Jackson Musical” is a truly worthy adaptation as well as a fantastic piece of theater. It played in Charlotte at the Knight Theater during the early run of its First National Tour from Jan. 15-20.

One thing I’ve learned as I’ve gotten older is that adaptations of novels aren’t ever going to be the 12-hour reenactment of the books you dream of. They use different mediums for a reason. A good adaptation doesn’t need to be a perfect retelling. Instead, they need to utilize their format’s strengths to tell the story. Changes are fine, as long as the original’s heart is still there. This is what “The Lightning Thief: The Percy Jackson Musical” does so well. Scenes are compacted (the book’s many-chapters road trip is condensed into the fun number “Drive”) or changed (Tartarus morphs from a dark, gloomy underworld into an equally life-threating disco version in “D.O.A.”), but they all retain the same spirit and tone of the original. The musical understands what made the novels so special and runs with it in musical form. It also makes the interesting — but appreciated — choice to keep the show’s connection to the larger book series, including hints and plot points that, though necessary for the book series, wouldn’t actually need to be explained for a stand-alone musical.

The absolute highlight of the show is its incredible seven-person cast (four of whom played the same roles Off-Broadway), whose small size often requires that the actors play multiple characters. Chris McCarrell is a strong lead as Percy, traveling between his teenage angst and heroics at equal speed. This interpretation of the character, though played by an adult, really highlights the fact that Percy is actually a middle-schooler struggling to save life as we know it. Kristin Stokes as Annabeth Chase provides a solid counter to McCarrell and highlights Annabeth’s desire to prove herself, both to her parents and to the world. She is unapologetic, smart and knows what she wants and how to get it, but she’s also allowed moments of emotional vulnerability and the freedom to expand beyond the title of know-it-all.

The real scene-stealer, though, is Jorrel Javier as Grover and Mr. D. Javier’s Grover is both heartfelt and funny, highlighted through a number of one-liners and the ballad “The Tree on the Hill.” He brings that same humor (and a large dose of exhaustion and irritability) to Mr. D whose “Another Terrible Day” is an impeccable introduction to the off-beat vibe of Camp Half-Blood. His energy is absolutely infectious and can be felt through the crowd. Ryan Knowles as Chiron/Poseidon/Hades/others is a stunningly-good voice actor whose “gallop” as Chiron is the best running gag in the show. James Hayden Rodriguez as Luke is so charming that I imagine Luke’s betrayal legitimately came as a surprise to anyone unfamiliar with the plot. Jalynn Steele also plays a wide variety of characters and emotions, from providing an emotional center as Sally Jackson to nailing the aforementioned underworld musical number “D.O.A.” Sarah Beth Pfeifer rounds out the show as Clarisse, though I wish the character had been given a bit more room to play and expand.

Set-wise, the production purposely utilizes a minimal set, with many pieces playing different roles. It relies on one’s imagination to fill in some of the blanks. While part of me would have loved for this show to get the over-the-top special effects of a Disney musical, this set feels more comfortable within the style and tone of the show. It is a musical about a group of angsty, rejected teenagers trying to overcome impossible odds. Their mission to save the world doesn’t have expensive gadgets; it’s a road trip with no money featuring everything from a Greyhound bus to a tractor. It fits.

The musical aspect of the show is probably the hardest sell for most theater-goers. Why add music? Why not just a play? For the most part, though, the music proves doubters wrong. It is used to add humor, create tension at big plot points and underscore emotional moments. It lets the characters speak to the audience and give insight into how they are feeling (like they would in a novel) without requiring something like a monologue. Highlights include Percy’s “I Want” number “Good Kid,” Annabeth’s solo “My Grand Plan,” and a number that truly captures the familial feeling of Camp Half-Blood, “The Campfire Song.” It doesn’t always work though.  The opening number and sequence “Prologue/The Day I Got Expelled” struggles from expository weight and sets the musical off on some uncertain footing. The lyrics can also sometimes come across as fairly heavy-handed and there are a couple of songs that while not bad, aren’t particularly memorable.

While I thoroughly enjoyed my time at “The Lightning Thief: The Percy Jackson Musical,” I do wonder at its ability to stand on its own two feet. It was overwhelmingly attended by fans who were already familiar with its source material. A large part of my affection for it can likely be traced back to nostalgia and relief at having an adaptation that loves the original as much as I do. From an outside perspective with no prior attachment, I can see how it might be dismissed. It isn’t a work of musical theater that will be known for its mass appeal or revolutionary approach. It isn’t a “Phantom of the Opera” or “The Lion King.”

However, I don’t think that makes it any less valuable. Not every musical has to be the absolute “best” traditional work of musical theater. “The Lightning Thief: The Percy Jackson Musical” has a creative stage design, a solid musical score and a stunningly talented cast. It tells a story that connects with young adults (both in age and at heart); a story about struggling to fit in, about family struggles and about finding your place in the world. It faithfully adapts a popular book and does it justice in a way so few adaptations seem to do. Most importantly, though, it was just plain fun. It is comedic and heartfelt and a sincerely enjoyable night at the theater. It doesn’t need to prove itself any more than that. Thank the gods.