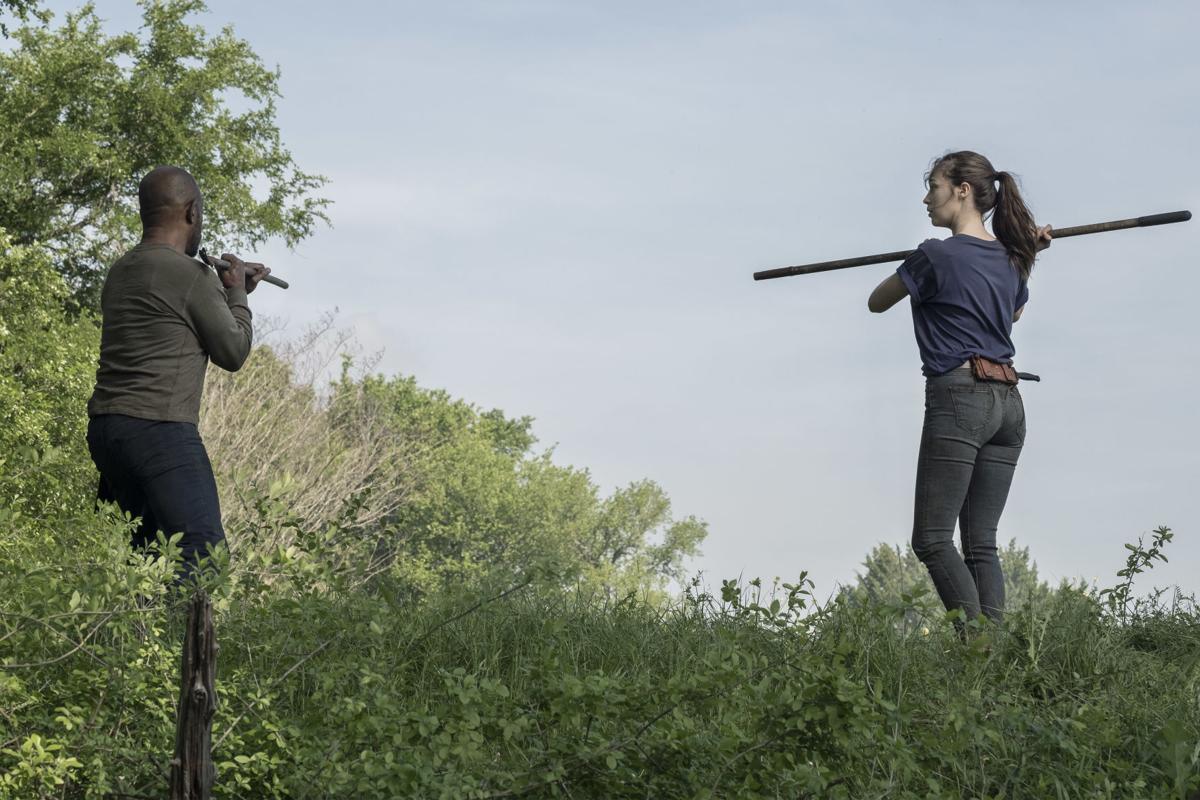 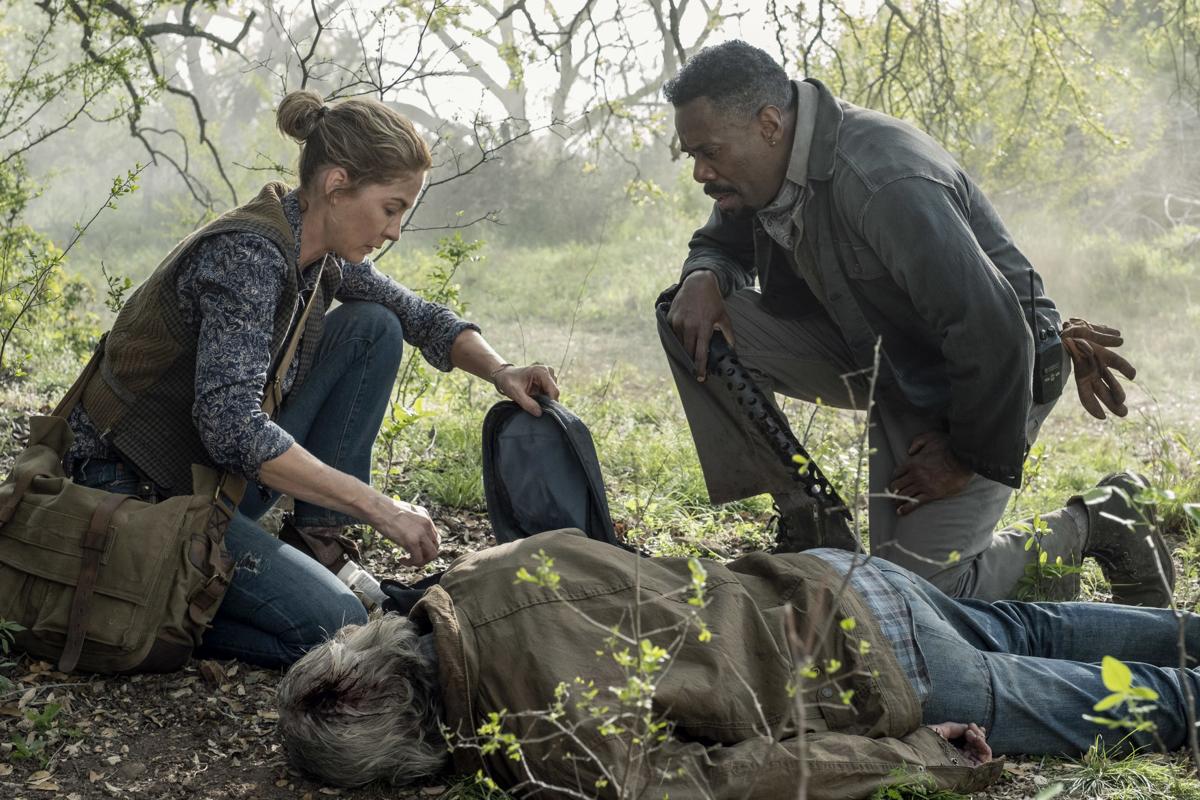 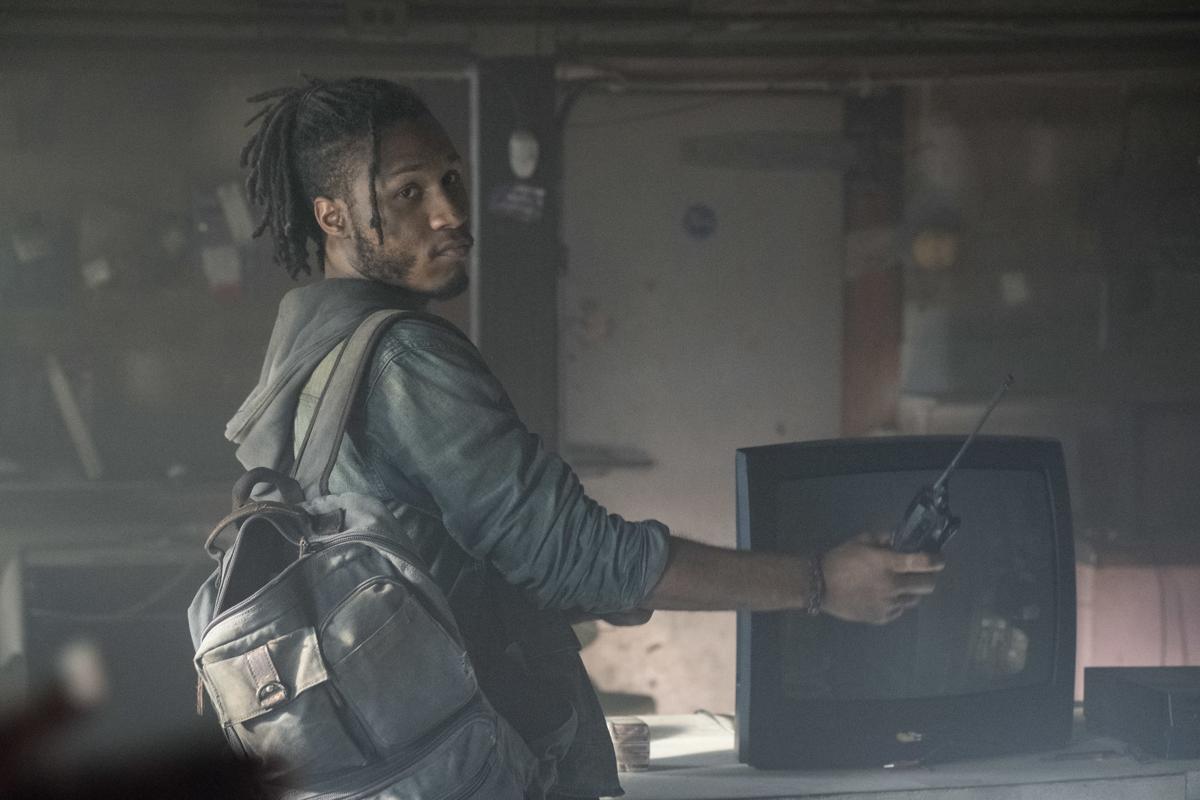 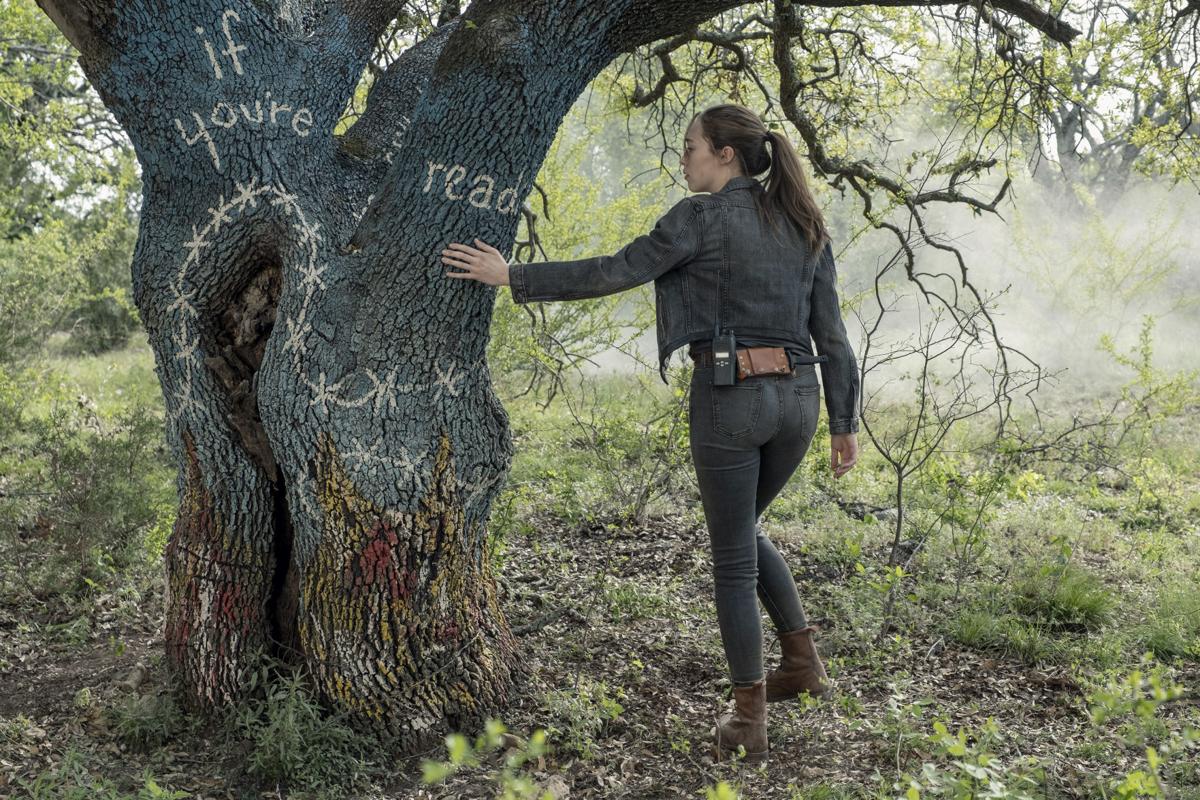 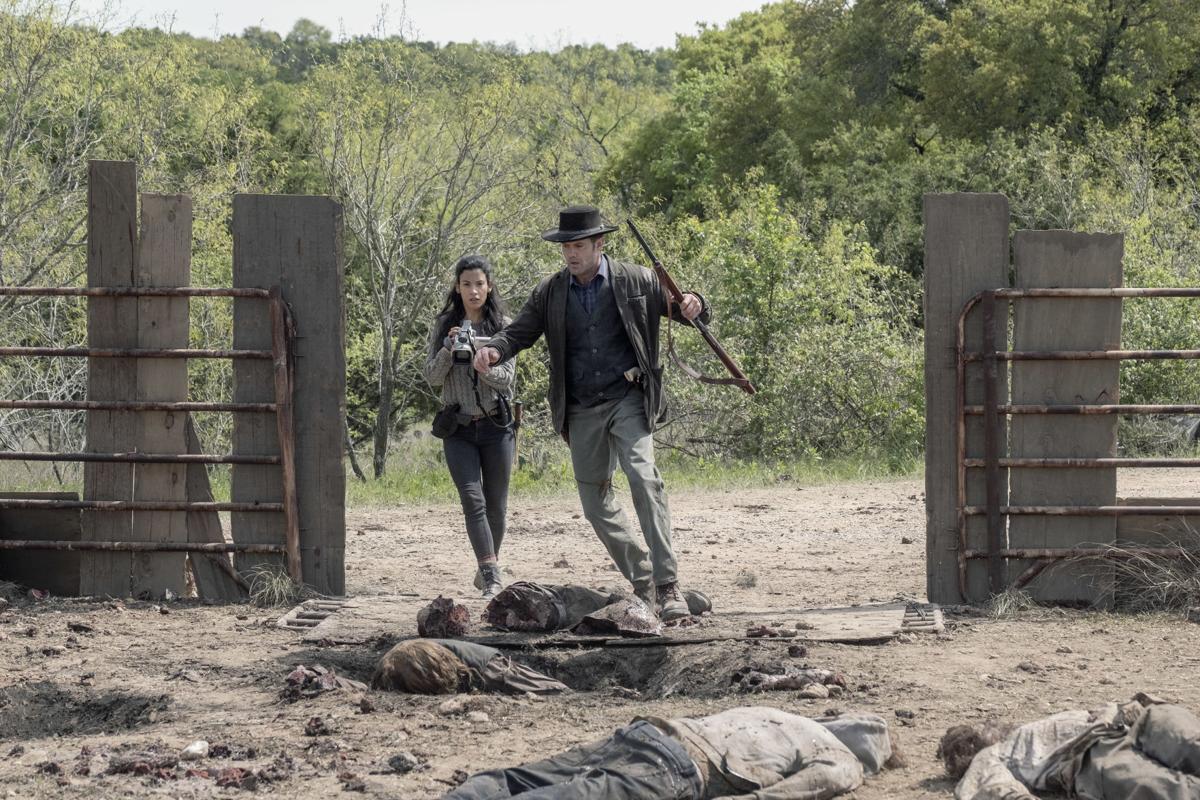 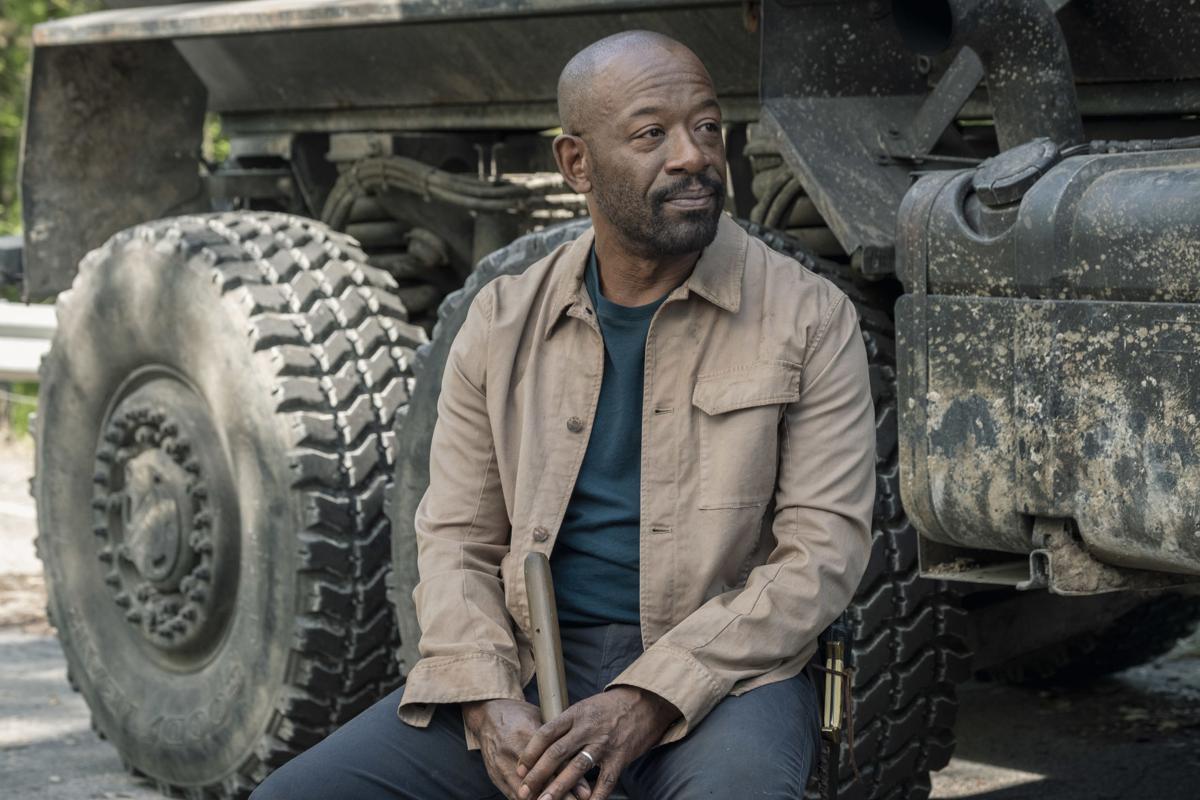 Spoiler Warning for the Mid-Season Premiere (Season 5, Episode 9) of “Fear the Walking Dead,” as well as all previous episodes of the series. Spoilers from “The Walking Dead” will also be discussed.

“What do you do with the time you have left? That’s the question.”

There’s a lot of stories to tell in the post-apocalyptic world. Althea’s documentation of the apocalypse serves the purpose of showing future generations what people went through when the dead walked the earth. Now, the recordings have an entirely new purpose. While extremely innovative and chock full of solid character development, this episode does suffer from an overtly positive tone that comes across as being hokey and cheesy at points. Still, there’s a lot of good here as the group tries hard to help those in need.

Some time has passed since the group successfully flew out of the radiation zone and landed safely to reunite with Sarah, Wendell and Daniel. Logan made a seedy proposition for the team to assist him in locating nearby oil fields…but the Mid-Season Premiere essentially skips past most of the drama surrounding that conflict. This episode has a unique format in that nearly the entire run is exclusively found footage, including interviews with the characters and action shots recorded by the survivors. Morgan, Alicia and the others are interviewed by Althea about their journey in the apocalypse and about why they have decided to dedicate their lives to helping others. Morgan explains that the plane flying overhead made people notice there were survivors in the area that were well-equipped. They started receiving messages over the radio from various people asking for help. Al presses Morgan about his declaration that the group also needs to start living for themselves, but Morgan is clear that they’re having a bit of a hard time with that.

Interestingly, Althea finds herself on the other end of the camera, being interviewed by Charlie and directing the other members of the group to document things themselves. She explains that the group raided a Big Spot and took the remaining cameras and batteries. Sarah shares that Polar Bear’s people provided the group with large amounts of fuel for the mission after they arrived at the oil fields. It’s revealed that Sarah and the others abandoned Logan and went to find the oil fields themselves. During Dwight’s interview, he points out that he’s essentially doing the opposite of what he used to do with the Saviors. He also reaffirms that he isn’t giving up the search for Sherry, although it isn’t his sole focus now. We see a great moment as Daniel bickers with Dwight about his reluctance to be given a haircut. In the caravan, Alicia travels with Luciana and Strand, assuring that the roads are clear and deciding what routes to take. Footage captured by Al shows Morgan training Alicia with the bo staff in the art of Aikido. She’s really picked it up quick, but obviously still has more training to do.

We learn this episode that the group has picked up several survivors and has created a convoy of sorts. They established a camp that is run by June and Grace, no longer using the denim factory as their base. During the interviews with June and John, Al questions about their upcoming marriage and they both reiterate that their love is what matters and that a ceremony isn’t necessary. We also see some focus given on Grace, as she is seen feeling her lymph nodes, explaining that she wakes up everyday wondering if she will begin to feel symptoms from radiation exposure. It’s interesting to see how the group has developed this mission that Morgan began, although it’s quite jarring when things pick up from where they left previously. There’s really no sense of time, so it’s a bit confusing when we see an established camp and system of operations already.

This episode features a very specific mission to help someone in need. John and Luciana come across a house with a woman and her son trapped inside. We learn pretty quickly that the surrounding yard is filled with landmines. The woman inside is named Tess (Peggy Schott) and she explains that her husband left their house to go find an inhaler for their asthmatic son. The problem here is that she has no clue where the landmines are buried and each one that is set off brings more walkers. Tess also shares that she hasn’t left her house since the fall of society due to the house being well equipped with supplies and sustainable equipment. In order to speed of the process of Tess’ husband Ben returning, Alicia, Strand and June head over to the local pharmacy to try and find him. They collect some medicine for their caravan in addition, but do not find Ben. The group ultimately decides to split up to try to locate him, but Alicia stumbles upon something incredibly interesting. She finds a tree with the message “if you’re reading this, it means you’re still here” written on it. This is completely similar to the message found by John and Dwight prior to leaving the nuclear zone in the Mid-Season Finale. Alicia mentions how this is something that Madison would really like and appreciate. Strangely, on the recording of Alicia inspecting the tree, she freezes up when a walker approaches, leaving Strand to kill it for her. Since the plane landed, Alicia hasn’t been killing walkers. She seems to be following in the lead of Morgan a bit too much. Unfortunately, the walker that came at Alicia happened to be Ben.

In all of the landmine chaos, more and more walkers are drawn to the area and more noise is made. “I don’t die” Morgan comes out as he decides to charge full steam ahead into the yard, jumping through the blown up spots to try and reach the house. Althea follows him and records, and thankfully so seeing as how Morgan accidentally steps on a landmine and is unable to move his foot lest he wishes to be blown sky high. John charges in along with Luciana, who is recording…to document Morgan’s potential death? Thankfully Al has some training with this and is able to talk Morgan through the process of defusing the landmine, although she isn’t entirely confident in her own knowledge. Tess decides to come out of the house to assist, seeing as how she watched her husband set them all up and knows how to actually diffuse them. She brings forward a pin that is used to safely release the pressure and allow Morgan to step off the plate. Before he does step off, he demands that everyone clear the area. He knows this may be the end for him, but he doesn’t seem scared. He safely makes it away from the landmine is able to reunite with his friends only to be startled when the landmine ends up going off.

After the hectic day the various members of the group had, they take time to unwind a bit with a campfire meal. As explained by John, this is a sort of tradition for this group, referring back to their campfire meal at the end of “No One’s Gone.” Grace shares that the meal is a recipe she had been wanting to make long before the apocalypse, but only now just got around to it. Tess expresses her gratitude for being helped and seems to now be a member of the group. We see Morgan ask Alicia if she wants to continue training, but she has a new personal mission; she wants to find who is making the tree messages. In the middle of the celebration, we see clips from an interview with Morgan as he explains that he is going to work on letting his wife and son go. He’s been carrying the burden of their loss for so long now that he finally needs to move forward, and helping Tess made him realize and see that. The found footage part of the episode concludes with a PSA-esque montage of the characters explaining their mission and need for others to pitch it. There’s no real explanation given as to how all of these clips are edited together, but we learn that it is one large documentary that is distributed for people to find.

This recording is found by a new character named Wes (Colby Hollman), who is introduced while watching the documentary. Wes is camped out inside of a gas station and has several things left behind from our crew of characters, including one of the roadside boxes. While preparing to leave on his motorcycle, Wes is met by two cars that approach him and hold him up. It’s Logan and his gang. Logan is angry for having to walk hundreds of miles after being abandoned by Sarah and the others. He misidentifies Wes as a member of the helper brigade and even goes so far as to destroy Wes’ motorcycle in a hellfire of bullets. The episode ends rather strangely as Logan provides Wes with a walkie talkie to radio the convoy and join them to warn them of Logan’s wrath. This is clearly a furthering of Logan’s arc into villainy, although Wes’ role in it all feels rather random. Since his introduction, Logan has been a puzzling character and it’s never really been clear what his actual role in the story is. That being said, it seems as though we’re about to find out.

“Channel 4” isn’t the best return episode of the show and while it suffers from some long-standing problems of the most recent seasons of the show, it is innovative and fun. Morgan and the characters are on a mission and this episode served it’s purpose to document that.

Be sure to tune into “Fear the Walking Dead” Sunday nights at 9 p.m. on AMC.