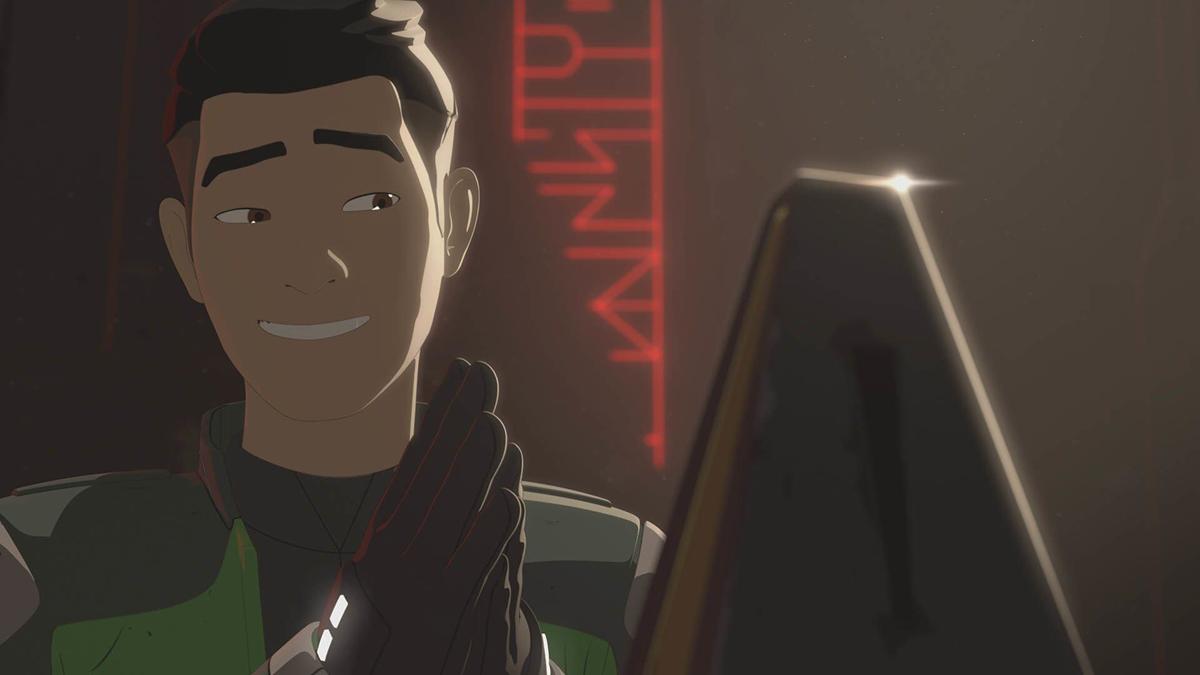 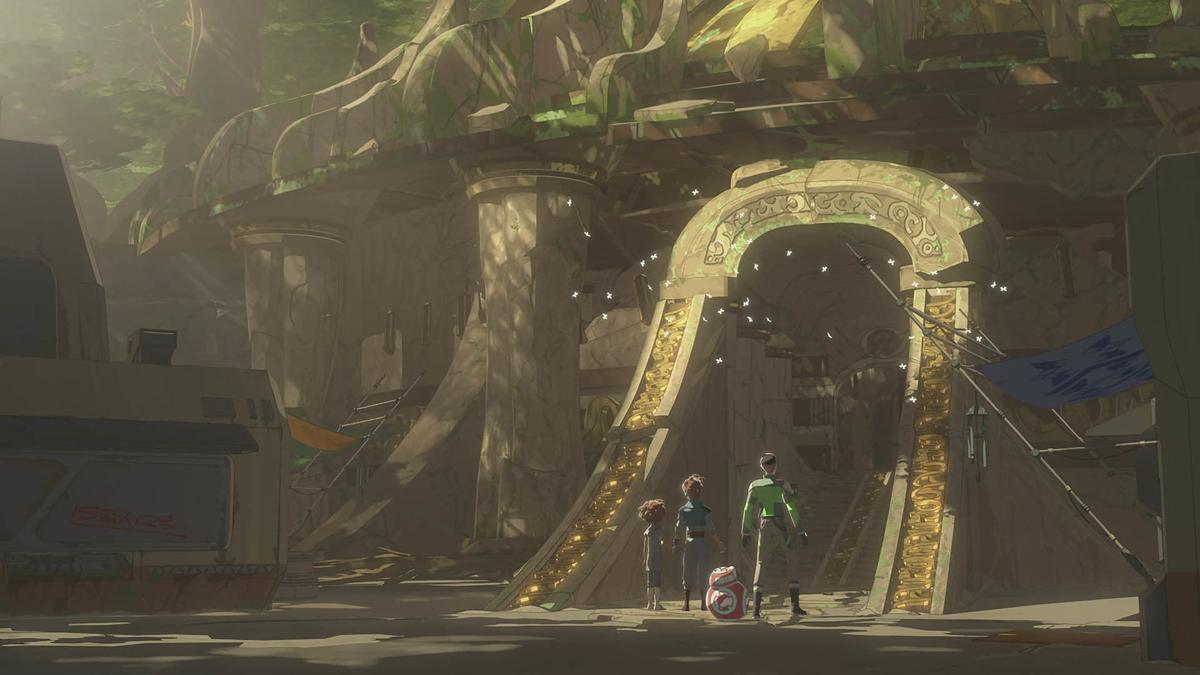 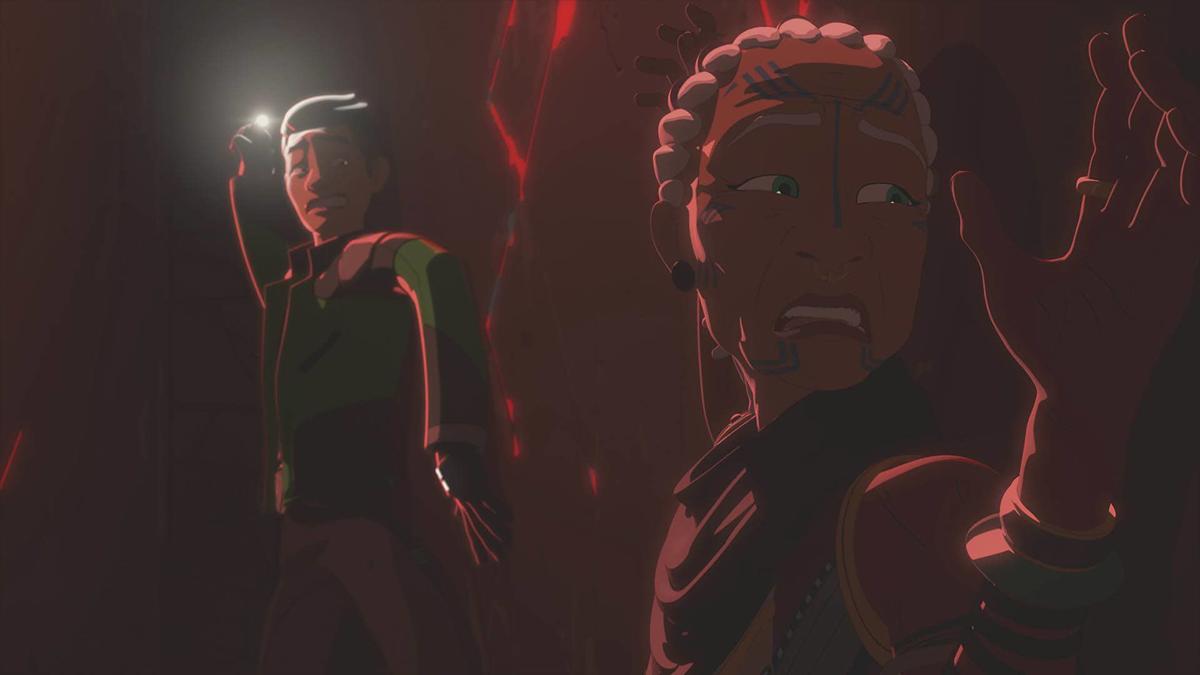 Warning: Spoilers for “The Relic Raiders” and prior episodes of “Star Wars Resistance” follow.

This week’s episode of “Star Wars Resistance” shakes up the formula a bit from what you would typically expect from the series. While so far it has been pretty far away from the Force, Jedi, Sith or anything of that sort, this episode breaks that mold. With a trip to Ashas Ree in search of supplies, Kaz (Christopher Sean) happens upon an ancient Sith temple.

“The Relic Raiders” finds Kaz working with Torra (Myrna Velasco), Freya Fenris (Mary Elizabeth McGlynn) and stowaways Kel (Antony Del Rio) and Eila (Nikki SooHoo). Kel and Eila are the orphans from last season who are finally making their debut for season two. Both seemed to have ties to the Force when they were introduced, so their inclusion here makes sense. They hear a voice calling for help and Kaz ends up following the two into what appears to just be an old Jedi temple before going deeper into the actual Sith portion. Something I found interesting is when Kel and Eila bring up the Force, Kaz claims not to really believe in the stories of it. I think considering the fact that he met Leia Organa he might have changed his stance, but I suppose not. The galaxy is big, so some people never being exposed to the Force and therefore not believing in its existence I do buy (see Han Solo in “A New Hope”).

Kaz and CB-23 end up separated from Kel and Eila, soon coming across an ancient Sith artifact. Kaz, now in some drunken state thanks to a sort of electrical trap, ignores the caution of the voice and grabs the artifact. He then drops through the triggered trap door, putting him face-to-face with the voice. The voice belongs to Mika Grey (Tudi Roche), an older archaeologist of sorts who’s mission is keeping artifacts like the one in the temple out of the wrong hands. She certainly has a mean streak in her and really gives me Asaj Ventress vibes (who the “Bucket’s List” for the episode confirms was the inspiration for). While she doesn’t appear to be a Force-wielder, she clearly knows a lot about it. It is interesting to learn that the Jedi temple above was built on top of the Sith one to balance it out. This seems like an idea carried over from unused “The Clone Wars” concepts, where Ahsoka would have at one point traveled deep into Coruscant’s underworld to find a Sith temple (though fingers-crossed we could still get this in the season seven coming to Disney Plus in February).

Despite Mika telling Kaz to stay still, the klutz can’t help but trigger a deadly trap forcing CB-23, Kel and Eila to save the day -- with guidance from the loner archaeologist. As they exit the temple (right after, of course, Kaz setting off one more trap, causing the temple to collapse), they discover Torra and Freya have been captured by special First Order Raiders. This special class serves to hunt down Sith relics for Kylo Ren. They also destroy Mika’s ship, springing her into action to save the day by setting off the Sith relic taken from the temple on the troopers. Mika returns with Kaz and co. which excites me greatly.

Mika was a great addition to this episode. Her character design is cool, both visually and in her backstory. She’s definitely seen a great deal of the galaxy and through that has gained a great deal of insight on the Force. She touches upon a topic I really like seeing brought up, which is that the Force doesn’t belong just to the Jedi or the Sith. With her joining the Colossus, I am very eager to see how she will be utilized in future episodes.

“The Relic Raiders” is a nice sidetrack from series’ typical shenanigans. While I still hope that this is the one piece of “Star Wars” media that doesn’t ignite a lightsaber, diving into the Sith temple stuff with non-Force-wielders is a welcome change of pace. I am curious to see what will become of Mika and the hints towards her teaching more about the Force to Kel and Eila. One thing I’ll say is Kaz is always clumsy on the ground but this episode really seemed to crank that up to 10. It is growing on me more and more, making it kind of the charming part of his character as long as its balanced well. Also, it almost seemed like we’d get some actual time spent on Freya, one of the Ace pilots. Outside of a few lines of dialogue though, that was a wash. With “The Mandalorian” and “Star Wars Jedi: Fallen Order” dropping last week, it made me realize how nice “Resistance” has been. While the other stuff is kind of better, “Resistance” has been consistently giving me a dose of “Star Wars” in a pretty large gap of time since “Solo: A Star Wars Story,” which I am thankful for. You can catch the next episode of “Star Wars Resistance” for yourself when it airs next Sunday at 6 p.m. on Disney XD.