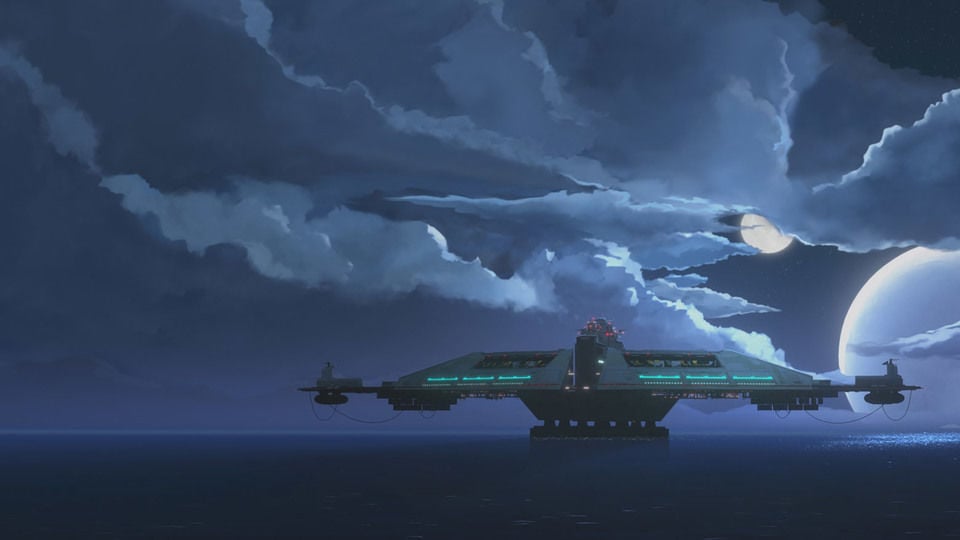 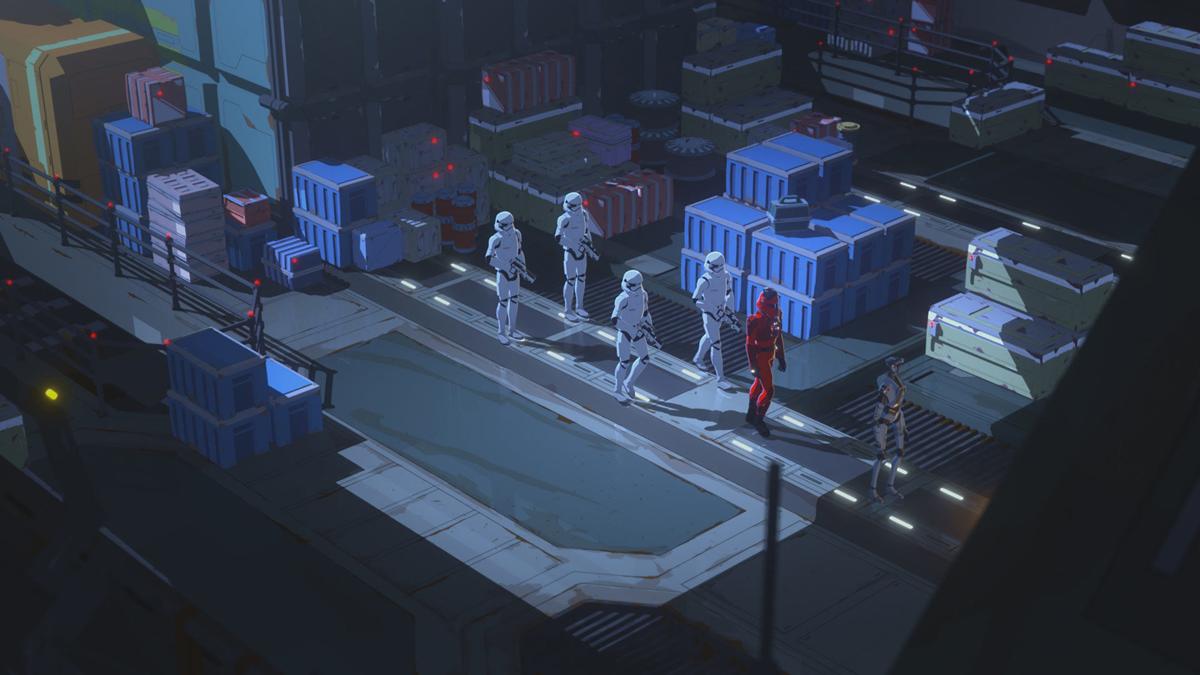 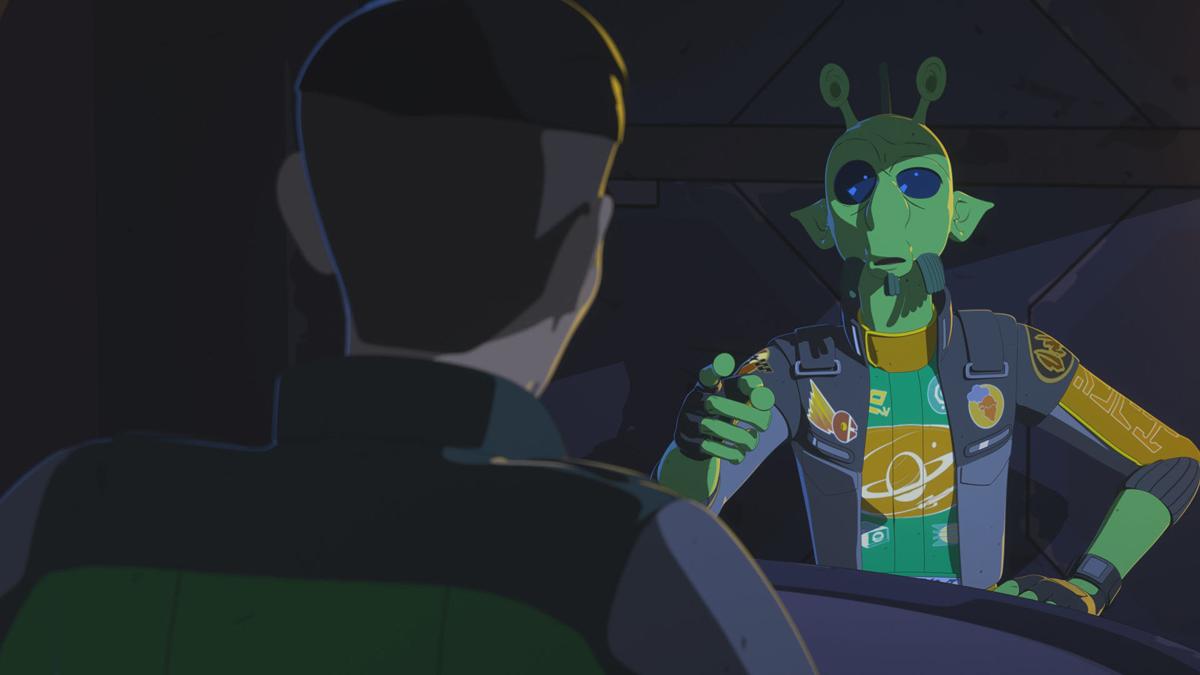 Up until now, “Star Wars Resistance” has mostly been a self-contained plot in a niche side of the galaxy, leaving only hints about how its characters would tie into the overarching galactic narrative. From eavesdropping on a top-personnel-only meeting to being chased down by First Order stormtroopers, Kaz (Christopher Sean) gets a real taste of what the spy life is like in this episode. While I enjoy the small stakes plotlines and don’t expect those to go away completely, I am happy to finally dive into why the First Order is so interested in the Colossus.

Much like prior episodes, this one starts off with Kaz struggling as a mechanic in Yeager’s workshop, with Neeku (Josh Brenner) testing out his new communicators so that he and Kaz will always be in contact with each other no matter where they are. When the Colossus’ power begins flickering on and off, Kaz, Tam (Suzie McGrath) and Neeku head into Aunt Z’s (Tovah Feldshuh) diner. Here, Aunt Z reveals her suspicions regarding the Colossus’ leader, Captain Doza (Jason Hightower), having ties with the First Order. We also finally meet another pilot of the Aces, Hype Fazon (Donald Faison), who is a very egotistical individual. Tam reveals that the two were friends before he became one of the Aces, a goal they were working towards together. Despite being resentful for his abandonment, Tam accepts Hype’s offer to check out the tower and brings along BB-8 and Kaz, who are eager to get a glimpse after seeing the arrival of First Order troops.

Once at the tower, Kaz is taken with the finer accommodations provided in the Aces’ lounge. Meanwhile, Tam and Hype discuss how their friendship fell apart. Not getting to know the characters besides Kaz was one of my only grievances with the start of the series, though last episode with Yeager and this one with Tam give us a better understanding of what these characters are motivated by. The exploration of Tam’s goal to become the best racer on the platform is a lofty one; something that I will be interested to see further explored, especially with Kaz seemingly working towards a similar goal. Speaking of, Kaz sneaks away with BB-8 to find out where the First Order troops went only to discover a meeting between them and Captain Doza. Major Vonreg (Lex Lang), the red stormtrooper pilot seen multiple times in the series so far, offers Doza a deal in protection from the pirates who have been attacking the station. We of course know that the First Order themselves are the ones supporting these pirates, though why they are so interested in the platform still remains a mystery. Doza remains firm in his stance against them though, and on their way out, Kaz manages to get spotted by the troopers, resulting in a chase.

Despite never really fearing that Kaz would actually somehow get killed or caught, the chase itself offered up some humorous moments which I enjoyed. Kaz first stumbles into Torra’s (Myrna Velasco) room, who was the Aces pilot he raced in the first episode, and is also daughter to Captain Doza. Her room offers a number of references, like stuffed animal versions of different species like Ewoks and even a poster of Sabine Wren’s icon from “Star Wars Rebels,” which I get the feeling isn’t there merely to be regarded as an easter egg. Kaz quickly jumps out the window and runs along the tight edge while dodging blaster fire, which the patrons of Aunt Z’s diner get the full show of, including Tam and Neeku. Kaz manages to make it back safely to the workshop, meanwhile Torra covers for his events at the tower with her father and Vonreg. Because of Doza’s backing of his daughter, the First Order back down and soon leave as planned. Despite Doza helping his daughter in covering for Kaz, the episode ends with his eyes still on what Kaz’s true intentions are.

If there is one thing I think the show struggles with the most, it is its way of balancing its lighthearted tone against having actual stakes for its characters. This is a series that I think is aimed at a more general audience than its two predecessors in “The Clone Wars” and “Rebels,” both of which also had a bit of maturing to do past their initial season. I don’t think “Resistance” is aiming to get as dark, nor do I even want it to drop its lighter tone, though it wouldn’t hurt to help get the audience a bit more invested in tenser scenes. I like the way the latter half of the chase handled comedy, with Aunt Z and her patrons placing bets on Kaz’s survival odds, so if they continue to substitute it with this kind of humor in future episodes then I won’t be disappointed. I think I am being a bit too harsh though as it is only episode four out of what is assumed to be about a 20-episode season.

Looking ahead, I am very curious to learn what exactly warrants the First Order playing both sides just to gain control of an isolated station in the Outer Rim. I’m mildly shocked to find that we had no Yeager in the episode, which was disappointing after what we learned of both his past and future potential in the last one. We did get to see Tam get fleshed out more, giving her further relevance than simply being used as a sort of cliche ally for Kaz who constantly gives him grief. Her drive to fix the Fireball so she can become a top racer herself certainly gives her character more of a compelling take, which I am excited to see followed through for the rest of the season. Torra also gets more screen time in the episode, and she is left in a position to be more of a potential friend of Kaz, and possibly to help get him into the Aces. Hopefully that all leads to more exploration within the Aces themselves.

This was another solid episode to add to “Resistance’s” debut season, one which sets up a number of exciting plot points to follow in the future. One minor detail from Hype’s ad-laden jumpsuit serves as an exciting reminder that a restaurant called “Admiral Snackbar” exists within “Star Wars” canon, which I love despite how cheesy it may seem. Since the episode was at night, we get a different perspective on the art style, though I would have hoped to have seen more ship combat in this style. The plot for Kaz to discover the First Order informant on the ship continues to thicken, even though he still kind of sucks at spying and being a mechanic in general. I’m excited to see where “Star Wars Resistance” goes from here, which you can see for yourself when the next episode debuts next Sunday at 10 p.m. on Disney Channel.