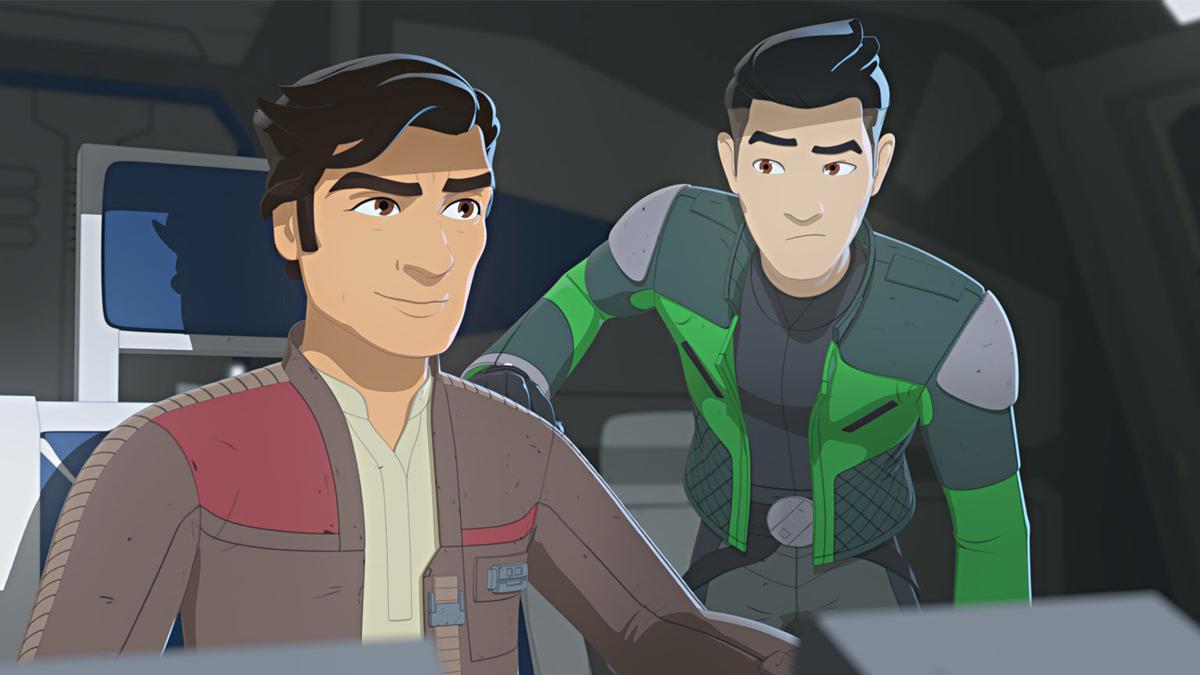 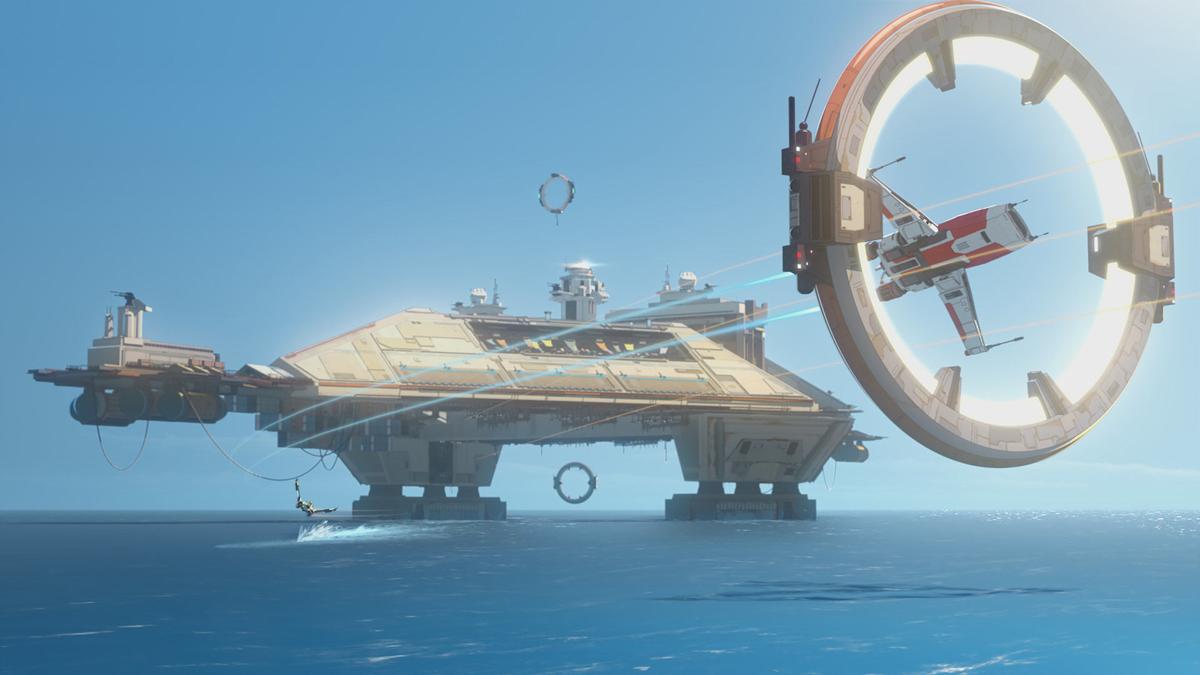 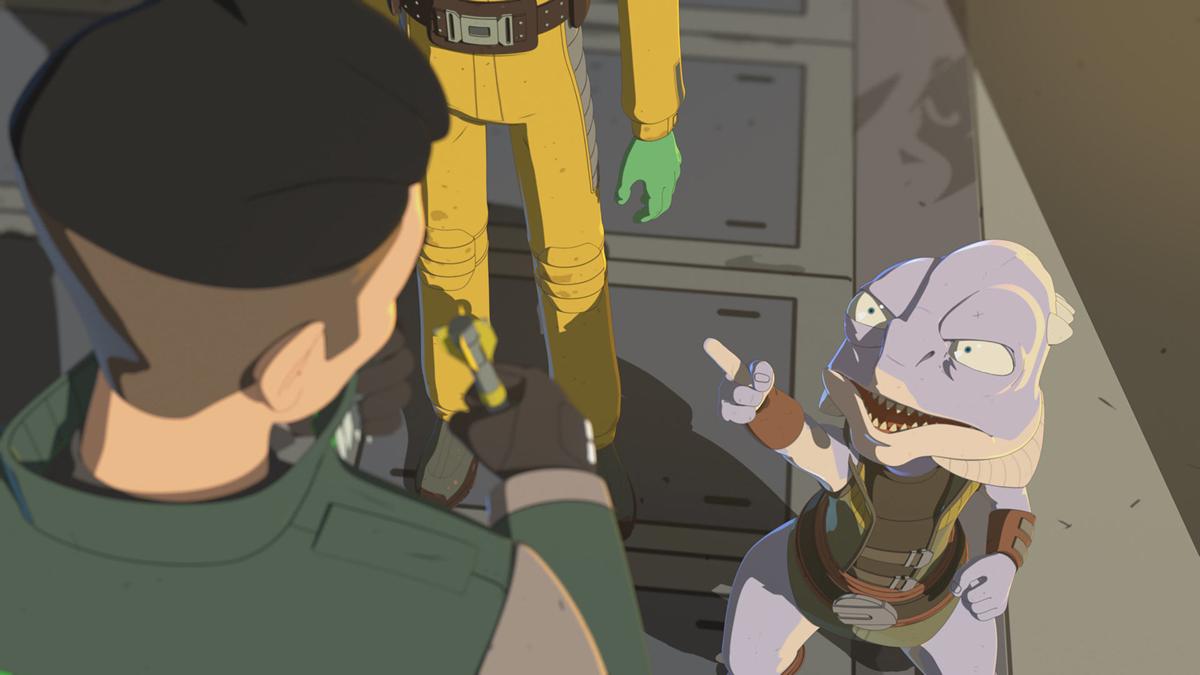 Among the many forms of story-telling in “Star Wars,” animation has always been my favorite in the franchise. In the downtime between the prequel and sequel trilogies, “Star Wars: The Clone Wars” filled the gap by delivering a unique story set inside the galaxy with a wide cast of characters week after week. “Star Wars Rebels” continued this with a more intimate look on a smaller family of characters, and now “Star Wars Resistance” carries on the torch into the sequel era. Set six months before “The Force Awakens,” “Resistance” follows Kazuda “Kaz” Xiono (Christopher Sean), a pilot in the New Republic military. The show features a brand new art style, reminiscent of that of Studio Ghibli, which helps to further distinguish itself from its predecessors. I’ve been looking forward to another medium further exploring the New Republic era on screen, especially with the limited time frame given in Episodes VII and VIII.

The premiere kicks off with Kaz and two other New Republic pilots on a mission to deliver key intelligence about the First Order to the Resistance. The mission becomes jeopardized when a First Order ace pilot gives the squad trouble, though the arrival of Poe Dameron (Oscar Isaac) and some quick maneuvering by Kaz takes care of the problem. With the intelligence delivered, Poe sees a desire for something greater within Kaz and offers him a spot in the Resistance. This takes us to what should be the main setting for the series, the Colossus, a giant station located on the ocean planet Castilon. The Colossus is explained to be home to a multitude of hot-shot pilots, all looking for fame and glory through racing ships. Poe leaves Kaz on the planet with some Resistance sympathizers and BB-8, with his mission being to locate the First Order informant on the planet. Through some unfortunate interactions with the some of the station’s locals, Kaz finds himself thrust into the competition as a racer.

While both premieres for “The Clone Wars” and “Rebels” had their merits, I feel as though they lacked something in terms of general appeal for a wider audience at the outset. “Resistance” feels the opposite though, and I think it provides a more mass appeal both in its story and writing. All of the animated series in general are aimed at a younger audience at first, but “Resistance” seems to find its place much more quickly than the rest. Besides some flat jokes, I felt as though the comedy within the episode was great, with an emphasis on slapstick humor. Kaz in particular is an example of this as he is presented as a somewhat clumsy fellow, albeit well intentioned. As the series’ protagonist, that might typically wear on the viewer, though there are more serious moments that I found compelling to his character, particularly with his father. Kaz shows a clear disdain for his father, a senator in the New Republic, for thrusting him into the military regardless of Kaz’s own choices and pushing him through the ranks based on his position rather than Kaz’s own abilities. This is something I am really looking forward to exploring more in future episodes, especially as it has a great significance on Kaz’s character arc.

One thing you will likely take note of when you finish the episode is the noticeable lack of any lightsabers or Force-inclined individuals. As much as I love that aspect of “Star Wars,” I am thrilled that we are finally getting a series dedicated to individuals who lack those skills, something “Rogue One” and “Solo” touched upon. In this debut episode, there is a lack of action on the ground. The only combat seen comes in the opening dogfight, which I felt was slightly underwhelming and a race towards the end. This shift of focus on the characters is something I would like to stick throughout the season as I think it is the strongest quality that “Star Wars” has, even with the genre-pushing visuals in both film and television.

With the art style, it certainly stands out in comparison to the other two series, especially compared to the shift from “TCW” to “Rebels.”  I thought the bright color palette would be annoying at first, but seeing it in action really brings out all of the characters, ships and environments. The quick sort of movements for the character animation is an interesting choice and I feel like it matches the show’s tone and art very well. What I appreciate most is the use of aliens from across all the films as well as new ones specifically made for the show, which is something that I feel ties the different mediums more closely together. The backgrounds are always filled with something or someone to watch, further adding to that lived-in feel that usually accompanies “Star Wars.” Since the show places a larger emphasis on ships, the animation style suits them well, especially in the big race, where the excellent sound design and visuals collide in classic “Star Wars” fashion. Art Director Amy Beth Christenson, who has been doing great work for Lucasfilm since the game “The Force Unleashed,” has simply done a fantastic job here in the design of the show overall.

The connections to the wider galaxy and other stories are present across the entire episode. Per the episode guide on StarWars.com, the X-wings seen in the first part of the episode are the new T-85 models, which the New Republic’s military make use of, something I hope is explored more in future episodes. For reference, T-65’s are what you see the Rebellion use in the Original Trilogy with the Resistance using T-70’s in the new trilogy. Greg Proops voices the announcer over the race at the end, which you may find familiar as it is the same voice actor who voiced the two-headed announcer in the pod-race for “The Phantom Menace,” though Lucasfilm has sadly confirmed it is not the same character. Oscar Isaac also reprises his role as Poe Dameron in this episode, which further legitimizes the television side in relationship to the films. Often times, actors who go in to do voice work seem like they simply read the lines off the script once and call it a day; Isaac, on the other hand, has a solid performance here.

“Star Wars Resistance” is a welcome addition into the Star Wars canon. While I was bummed about “Rebels” ending last spring, this prospect of an entirely new era and cast of characters to learn more about is something I am very excited for. From visuals to sound to storyline, “Resistance” is shaping up to be another solid animated series to add onto creator Dave Filoni’s repertoire. This era of “Star Wars” has been ripe for exploration for a long time, especially in such a way that places less emphasis on the more mystical side of the galaxy. If you loved any of the prior animated “Star Wars” series or are simply looking for something more outside the films, “Star Wars Resistance” is something I can highly recommend. It balances its comedic beats with a compelling narrative and cast of characters, giving it that almost Saturday morning cartoon vibe. If you want to check out “Star Wars Resistance” for yourself, you can catch it when it airs on Disney Channel next Sunday at 10 p.m.