You are the owner of this article.
Edit Article Add New Article
Home
News
Sports
Arts & Entertainment
Opinion
Lifestyle
Multimedia
In Print
Español
Share This
1 of 5 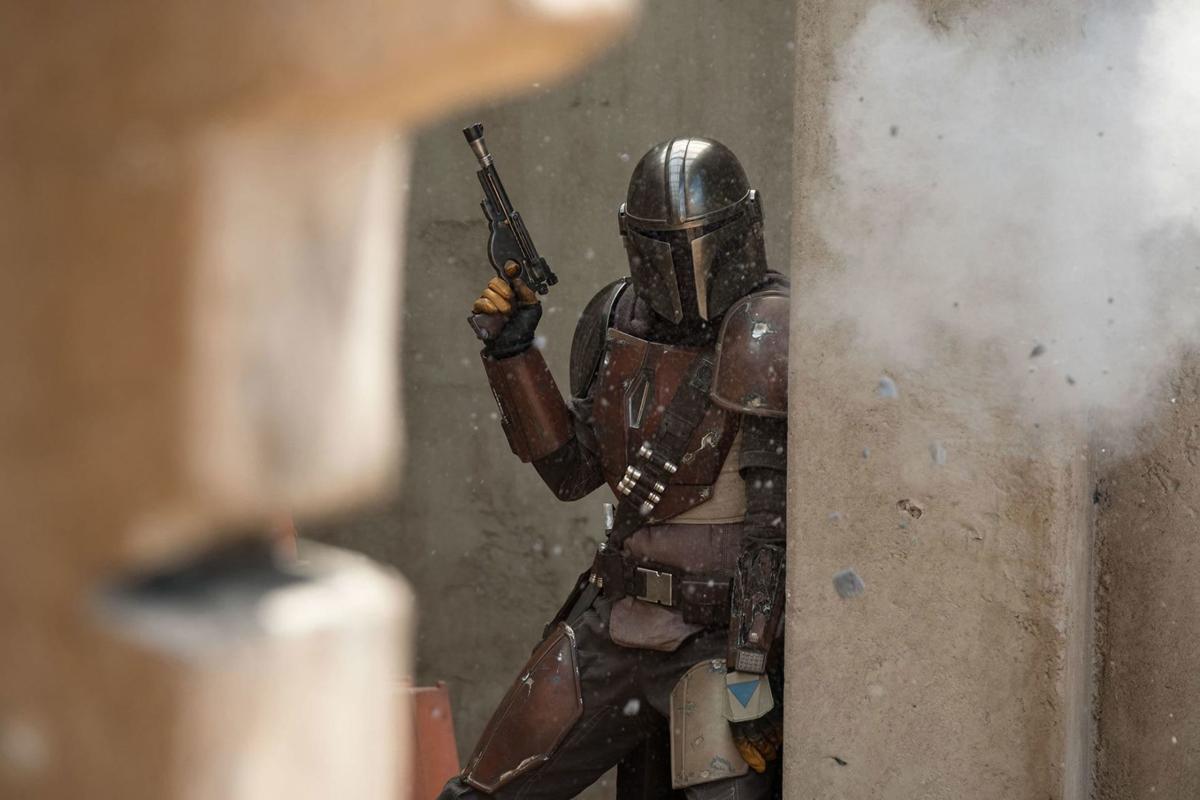 Warning: The following review contains minor plot elements and character descriptions for the premiere of “The Mandalorian.”

For years, rumors have swirled about the concept of a live-action “Star Wars” series, dating back to even before the Disney acquisition. It was rumored that George Lucas himself was working on the series with around two seasons worth of scripts already written, but the technology for CGI wasn’t quite at the level he wanted with a TV budget at the time. Now that “The Mandalorian” is finally here though, I still didn’t quite believe it myself until I finally set my eyes on the premiere.

Going into this series, I have to say I was already pretty optimistic given the talent involved. When Jon Favreau was announced to be creating, writing and producing “The Mandalorian,” it immediately made sense given his tenure as the voice of Pre Vizsla in “Star Wars: The Clone Wars,” a Mandalorian terrorist and leader of Death Watch. Of course, running that show was Dave Filoni, someone who was mentored by Lucas himself and absolutely nailed it in both “The Clone Wars” and “Rebels.” Filoni now makes the jump from animation to live-action (something I have been hoping for since the Disney acquisition), helping Favreau in the creation of the series and even trying his hand at directing, both in this premiere and later in the season. Add in someone like Kathleen Kennedy and you can tell why I thought this series was in good hands.

The premise of the show follows The Mandalorian (Pedro Pascal), a bounty hunter working in the fallout of the Galactic Civil War (basically post-“Return of the Jedi”). Right from the get-go, I was enamored with Pascal’s lone gunman. The slow start works surprisingly well to show his skills and hits you hard with the show’s obvious western-style -- something “Star Wars” is no stranger to. Even with the Empire overthrown, it is apparent that the lack of real governmental structure across the galaxy is having an effect. Greef Carga (Carl Weathers) is a handler of sorts for the Bounty Hunter Guild, setting people like The Mandalorian up with bounties. We also have the person giving out the main bounty for this episode, known as simply The Client (Werner Herzog). Introduced also is not IG-88 but another bounty hunter droid named IG-11 (Taika Waititi), as well as possibly my favorite of the bunch Kuiil (Nick Nolte). The Mandalorian is set on a high-stakes bounty, a path that leads to some pretty shocking stuff I wasn’t quite anticipating. That is about as far as I’ll go in terms of plot and setup for this initial review, but overall I can say it is well-written and extremely solid as a start for this series. It definitely hooked me into wanting more by the end.

The cast here is very, very strong. Pascal plays the mysterious bounty hunter well, which can’t be easy. You would initially assume wearing a helmet for the entire time would be helpful, but without the ability to express with your face, good body language is a must -- which Pascal pulls off. His voice fits the role and I like that the show does present him as clearly capable, but not an entirely flawless, stone-cold killing machine. We get hints at his past which are intriguing points of interest and I am really curious about whether he is truly a Mandalorian. If you’re still wondering what that name means, the Mandalorians were known as a proud warrior race before residing to peace in the Clone Wars under Duchess Satine. That did not come without protest though, and eventually, the multiple factions began warring with each other. At this point post-”Jedi,” it is unclear what position they are in now.

While we don’t get much of Weathers’ character Greef Carga, the small taste we do get leaves me wanting more information about what drives him in his role handing out bounties. While he hasn’t seen any of “Star Wars” -- which I think is a good thing for actors coming in fresh for certain roles -- Herzog also feels right at home in the “Star Wars” galaxy. He steals the entire scene that he is in and his revealed background raises some interesting questions. IG-11 is fun in his part for this episode, with the hilarious Taika Waititi even showing restraint in the role (which I appreciated). He has his funny moments, but I’m glad that it isn’t just copying-and-pasting what worked with K-2SO in “Rogue One.” The standout though was Nolte as Kuiil, a blurrg-riding Ugnaught. In line with the Western theme, Kuill plays a sort of Western-trope Native American mentor role to The Mandalorian’s cowboy. You get this vibe in both his reliance on nature and his speech pattern. Nolte’s gruff performance as Kuiil left him as the one I easily wanted to see more of. The episode balances all of these characters’ introductions well, with about each segment of the show focused on each.

From a production standpoint, the money is being clearly well-spent. Favreau manages the mix of practical effects (something key to “Star Wars”) with CGI. The CGI itself is extremely well-done and movie-level for the most part. There were some shots with a blurrg -- kind of like a lizard-bull -- and a land speeder towards the beginning that stood out to me in a not-so-flattering way. Everything else though is exceptional and hard to believe that this is what TV can achieve now (in part thanks to Disney’s wallet). IG-11 is a good example of it done right, wherein the climactic action scene of the episode there were multiple times he looked like a real practical object onset. The use of a combo of ILM and Epic’s Unreal Engine also seems to be made of great use here, the latter of which is the first time being used on production and not just in video games.

That all sounds great but is it “Star Wars?” There are a lot of elements in “The Mandalorian” that make it clearly distinct from the rest of “Star Wars,” but it still has those ties to its source material. Favreau shows clear respect to both the original and prequel trilogies here, primarily the former. There is a mix of aliens both old and new throughout (one of the few aspects I think the sequel trilogy has failed at thus far) and even some stuff from “The Clone Wars” and “Rebels,” like with the blurrg creature. There are even a few nods to the beloved “Holiday Special.” All of this helps to keep the show connected to the rest of “Star Wars,” despite the fact that it is set off in a corner of the galaxy made up entirely of characters we have yet to become acquainted with. You also get plenty of screen-wipes, a staple of the “Star Wars,” but also some fade-ins and fade-outs at certain scenes which, off the top of my head, I don’t believe has been done before. Also, I love the recorder-playing Kubaz who summons speeders with his instrument. He is giving Opeepit and his floor-sweeper from “Star Wars Resistance” a run for his money as my favorite new “Star Wars” character.

This story also has a darker tone, but nothing “Star Wars” hasn’t delved into before which I think is good. It’s merely my opinion, but “Star Wars” isn’t edgy and I don’t think it ever should be. That isn’t to say it shouldn’t get dark -- that is inherent to “Star Wars” -- but at its core, it needs to remain a story and message that all generations can get behind. That is what makes the entire saga so timeless and loved by all, in my eyes at least.

Music is one of the core pillars to “Star Wars,” and “The Mandalorian’s” is probably the furthest the series has strayed from its John Williams roots. Despite that, composer Ludwig Göransson absolutely nails it here. There is really no trace of Williams’ main themes anywhere which I think really helps it stand out. Göransson makes it his own, once again taking obvious inspiration from the western genre in “The Mandalorian’s” main theme. There is also a track towards the middle with loud-and-proud brass and an electric bass keeping count which sounds very “Rocky-esque,” which may not be too far off a guess since Göransson composed “Creed” as well, and Carl Weathers, of course, is known for his iconic role as Apollo Creed in that series. There is a sense of adventure that swells within you from the show’s main theme, going from big and bombastic percussion to quiet and reserved woodwinds. It is a great mix and I cannot wait to see what comes from Göransson for the rest of the season.

For his live-action directorial debut, Dave Filoni is -- unsurprisingly -- extremely exceptional. He is one of the most knowledgeable individuals about “Star Wars” outside Lucas and has three animated series to back that up. There are multiple shots throughout that simply dazzle the eye. All of the actors’ performances feel real and right at home in “Star Wars.” The humor especially never feels forced but comes in at just the right time and in the best delivery -- another key piece of the puzzle for me in “Star Wars.” The action also is well-done, especially in the climax of the episode. That final battle is really what sold me on the potential of what the series can pull off. Filoni nails it and leaves me excited for his next episode at the series’ halfway mark.

I won’t make any brash judgments yet, but “The Mandalorian” is extremely promising and looks like it could be the best piece of content put out in Disney’s era of “Star Wars.” This more intimate look at a cast of characters in a corner of the galaxy completely separate from familiar faces is very welcome. The cast so far is great, Pascal shines as the lead but I am excited to see even more new faces (especially Gina Carano’s character). If you’re a “Star Wars” fan, then I think getting Disney Plus for this series is a no-brainer. There is easily enough just in the premiere to bring me back, like The Mandalorian’s past, his apparent tribe of Mandos and whether he actually is one or, if like Jango and Boba Fett, he is simply someone donning the armor. I am a fan of pretty much all of what Disney has put out, but if you’re someone more close to Lucas’ Original Trilogy, then “The Mandalorian” is probably your ticket back. There is something for all “Star Wars” fans in it though, which is certainly by design from Favreau, Filoni and Kennedy. I love it, and can’t wait to see what is next. You can catch the next episode of “The Mandalorian” for yourself next Friday on Disney Plus.