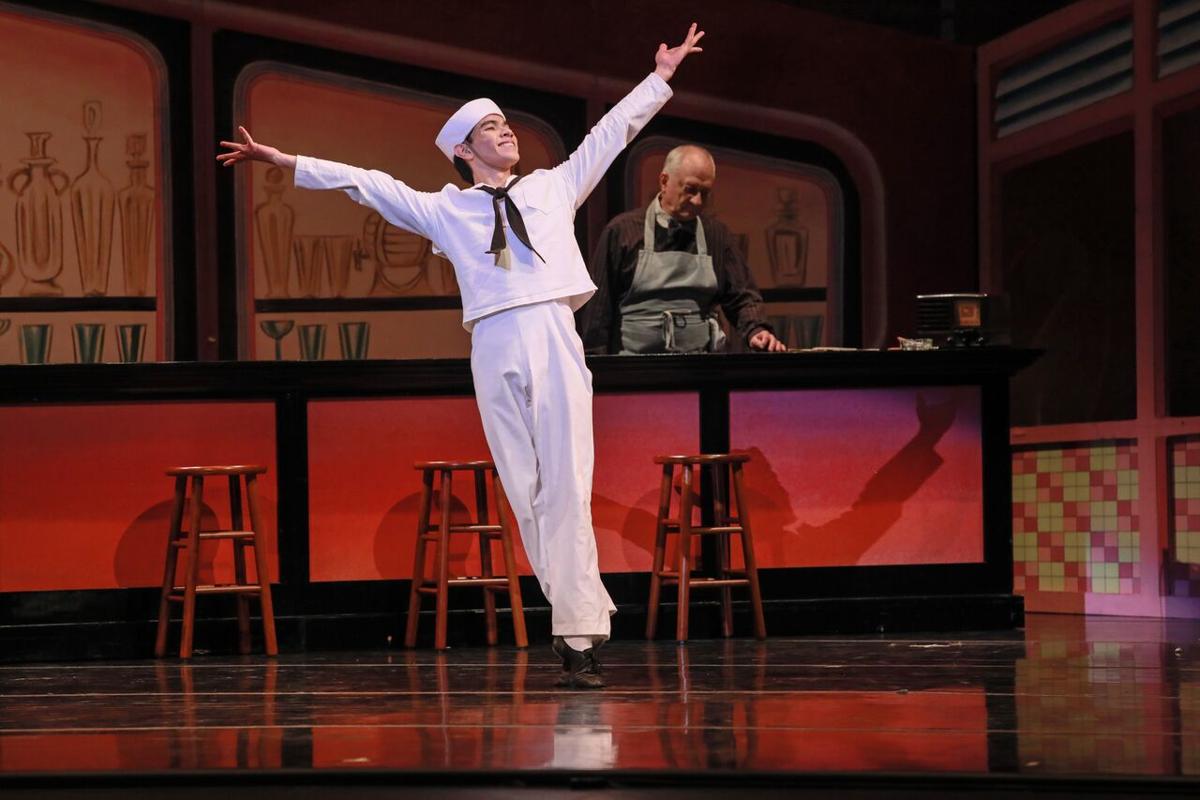 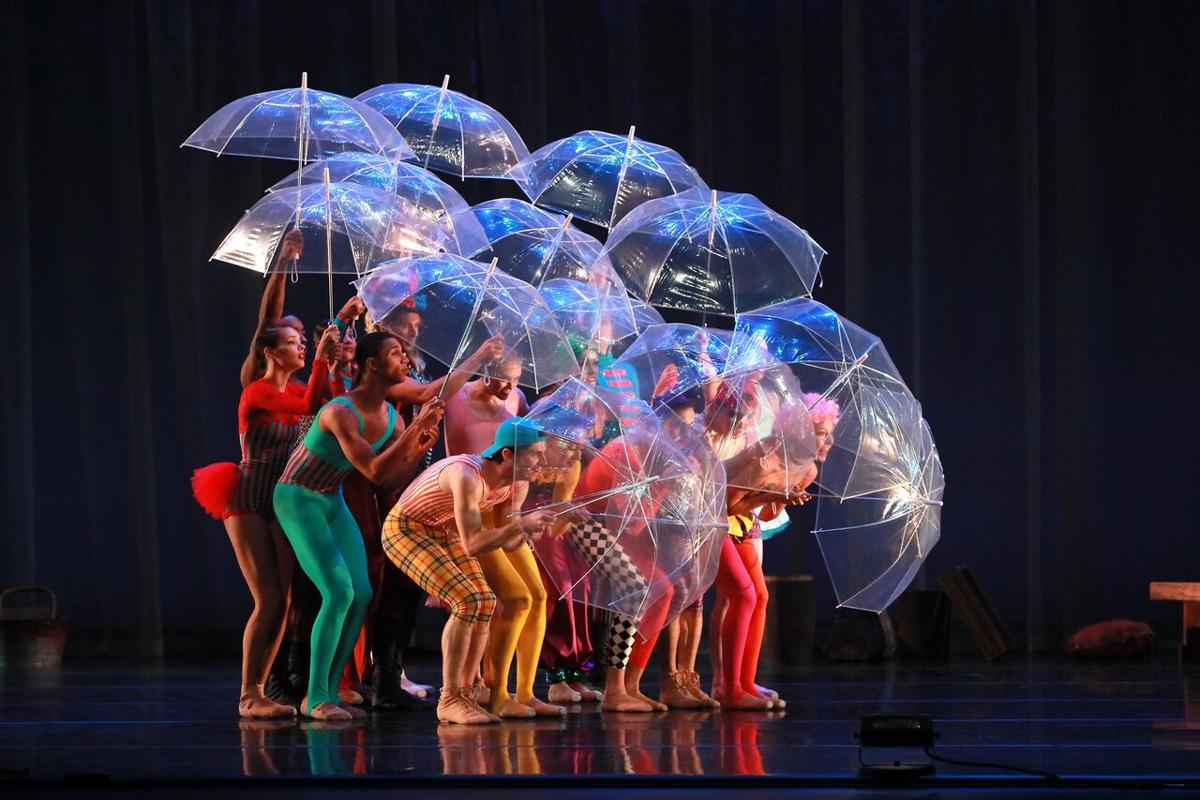 Charlotte Ballet presented “Fall Works” Oct. 11-13. Three pieces made up the program, two by contemporary choreographers and one, the classic “Fancy Free,” by Jerome Robbins.

Resident choreographer Sasha Janes presented “Facsimile,” a narrative piece that took place in a carnival to music of the same name by Leonard Bernstein (whose centennial is being celebrated this year throughout the world). The Charlotte Symphony provided live accompaniment for this as well as for “Fancy Free.” The story consisted of an outcast and a dreamer who were swept up into the magic of a circus. Once the protagonists entered the circus, the piece picked up. The movement was interesting and each character had his/her own personality matched with a unique, colorful costume. In fact, after the circus scene was revealed, the narrative (which already was a little unclear) seemed unnecessary. While Bernstein’s melodies often evoke a story, this particular music was not as melodic and thus didn’t require one. Without narrative, the piece could have certainly existed on its own.

Visiting French choreographer Mehdi Walerski created “Petite Ceremonie,” a complex, multi-layered piece that investigated “life in a box.” The piece messed with unison and sporadicity; at moments, the dancers all did the same thing in a single file line or in a clump and then abruptly they would all move differently. Some movement was very technical and intricate, while some movement was like dancing in the club (they did the Nae Nae). Sometimes, the dancers were in earnest, while at others, they talked amongst themselves like at a party. Even once, they pointed at the audience and laughed uproariously. The piece explored different planes of space and time, even at one point having a dancer, while juggling, speak to the audience about the differences between the wirings of the male and female brains.

Finally, but actually first on the program, Charlotte Ballet produced Jerome Robbins’ “Fancy Free” in celebration of both Robbins’ and Bernstein’s centennial (both were 26 at the time of the premiere). The piece is about three sailors who are on leave for one night only in New York City. Their main pursuit? Women.

The piece premiered in 1944 and it’s easy to see that it is an aged piece. The sailors harass and catcall the women who eventually are flattered and head back to a bar with the sailors. With only two women to divide among the men, the sailors each try to win one of their hearts by performing his own characteristic solo. Kipling Houston, a former dancer of Robbins at the New York City Ballet and who staged the piece for Charlotte Ballet, declared the piece “now, a complete period piece.” But even now that its narrative has aged, more than 70 years later, the piece continues to be performed all over the world and is considered a classic ballet. Parts of it have not stood the test of time, yet as a whole, it remains. Why?

Undoubtedly, it has to do with the music. Bernstein’s score can be upbeat but also touching and Robbins’ choreography plays with every single accent. The two worked closely together in the creation of the piece, meeting many times in person and, when Robbins was on tour with the New York City Ballet, exchanging witty and thoughtful letters to continue the process. Within the silly narrative of boys chasing girls are wonderful melodies that Robbins translates into movement. Bernstein’s tunes are ones easy to relate to; the audience latches onto the music and we are left humming it hours after it is over. And Robbins, mixing jazz, tap, ballet, mime and social dance (groundbreaking for its time), reflects this accessibility. We recognize moves in the dance like handshakes, hugs and dances that we do at parties. The whole piece is familiar, and not just for its goofy (and now unacceptable) male behavior. The choreography and the music are very complicated and difficult to reproduce, and at moments, both the dancers and the orchestra struggled to express the energy and emotion, although the piece should appear simple.

It’s easy to write off “Fancy Free” as outdated, sexist or simplistic. “Fancy Free” certainly hasn’t survived for its deep, inspirational or political plot, for it is none of those things, at least in this particular interpretation. But “Fancy Free” wasn’t meant to be all of those things. It was meant to be light and comic, if at times bittersweet. The music is like singing and the dancing is like, well, just dancing. “Fancy Free” has lived on because of its art; its melodies and moves that the audience can remember. The art part does not include the dumb human behavior because it is art that lasts, not human behavior. Behavior changes (and hopefully improves) generation by generation, but art remains, patiently humming the truth that always has been and always will be. The closest we can get to this truth is by mimicking it, but when we mimic it — the beauty, the compassion — it isn’t anything mortal at all. It is a mystery that, like “Fancy Free,” will outlive us all.