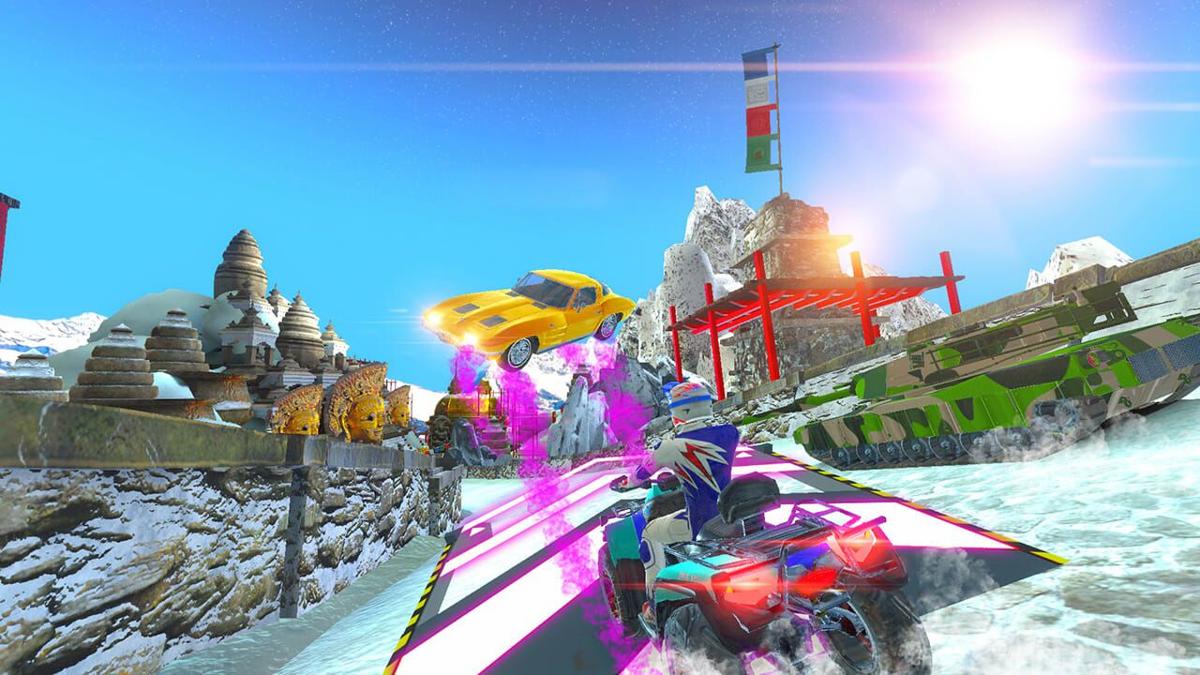 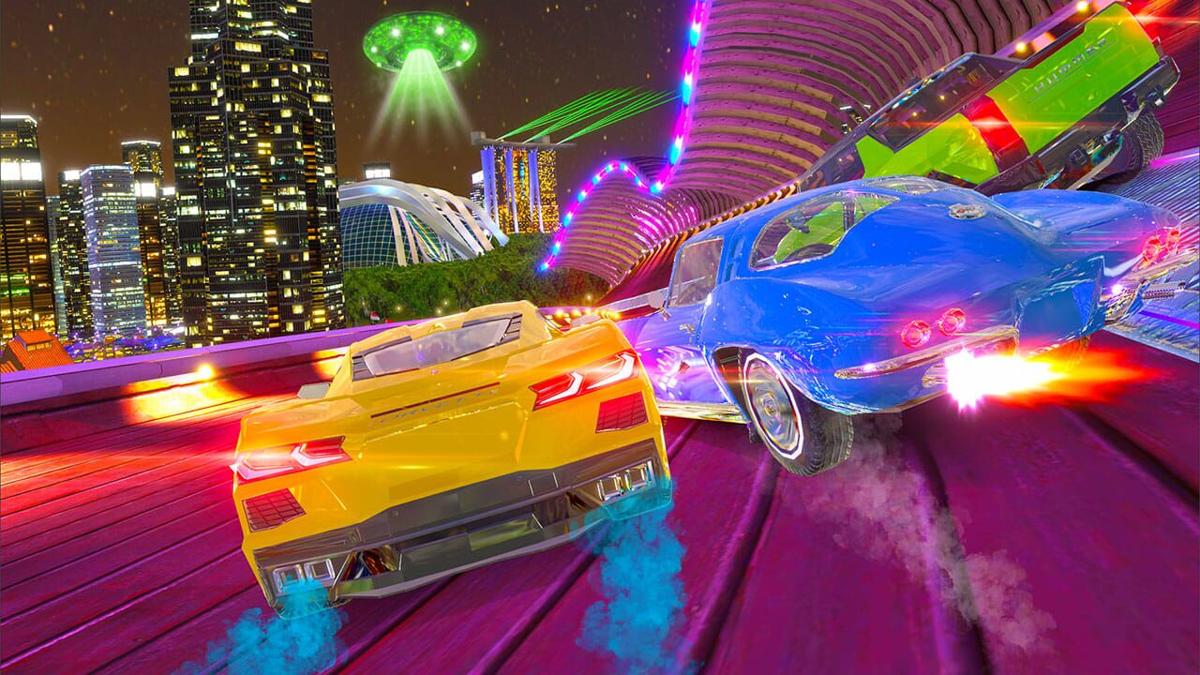 The "Cruis'n" series has had a very particular appeal from its very inception. The original trilogy of "Cruis'n" games, released first in arcades and then on Nintendo 64 throughout the late 1990s, always seemed to be created with one goal in mind: pure and complete chaos. They were as "arcade" as an arcade racer could get, providing cheerful thrills and requiring little more of the player than simply turning off their brains and enjoying themselves. That being said, games such as "Cruis'n USA" and, to a lesser extent, "Cruis'n Exotica" had several significant issues that held them back from success in the home console market. Consoles and arcades have very different dynamics and expectations surrounding them, and it seemed as though the developers of "Cruis'n" titles on the N64 never quite learned that distinction. Now, over 20 years after the release of "Cruis'n Exotica," developer Raw Thrills is aiming for yet another arcade to console conversion, this time bringing the 2017 arcade title "Cruis'n Blast" over to Nintendo Switch.

Having encountered the cabinet in various places over the past couple of years, I have to say that the arcade version of "Cruis'n Blast" is an absolute delight. Sporting a full steering wheel and pedal setup, a thumping bass speaker built right into the seat and a gorgeous display, "Cruis'n Blast" in arcades is well worth the $1.00 that is often required to play it. That being said, it never really struck me as a title suitable for a home console release, as it features a mere five racetracks and only a handful of different vehicles, all of which are unlocked from the start. The Nintendo Switch version looked set to mitigate this, as it advertised having nearly 30 racetracks and 20+ unlockable vehicles, ranging from classic cars like a Chevy Corvette Stingray to a straight-up hammerhead shark. (Yes, it swims through the air. No, you aren't allowed to question it.)

Furthermore, the core gameplay has made the jump to Switch relatively unscathed. The control is close to perfection, with every vehicle in the game feeling incredibly light and nimble. The sense of speed is also top-notch, making tearing around corners and dodging hazards an absolute joyride of a time. Even the graphics compare somewhat favorably to their arcade counterparts. Things like lighting and depth of field effects have taken a slight hit, and the framerate sometimes struggles to maintain its 60 frames-per-second target, but the core of the game's visuals is still intact and looks fantastic.

Unfortunately, it doesn't take long for everything (and I do mean everything) in this package to fall apart. For starters, I was able to race on every single track in "Cruis'n Blast" in a little under an hour. This isn't exactly out of the ordinary for racing games, as even something like "Mario Kart 8 Deluxe" takes a little over two hours to complete your first time through all the grand prix courses. However, Mario Kart has heaps and heaps of replay value, worthwhile bonus content and online and local multiplayer. Unfortunately, "Cruis'n Blast" falls criminally short in most if not all of these categories.

"Cruis'n Blast" sports several different difficulty modes for its single-player races. This sounds great and should give players a reason to continue improving as they pit themselves against more capable opponents. The problem is that every difficulty feels exactly the same. Not only can I consistently come in first place in easy, medium and hard difficulty modes, but even the margins of victory were about the same in all modes, leading me to wonder what exactly was even changing. The 20+ unlockable vehicles also become a moot point when you realize that every car controls and handles nearly identically. The game claims that the cars have wildly different stats, with some shown to have high top speeds while others are supposedly slower but more agile in corners. In practice, though, they all feel the same to drive, making the vehicles feel like little more than cosmetic skins. The game encourages you to replay courses over and over again to find three hidden keys in each course as well as to earn cash, but all the keys and cash are suitable for is unlocking more cars, which, as we discussed before, feel utterly useless due to them not being distinct enough from one another. While there is local split-screen multiplayer, which is serviceable enough, the absence of any online multiplayer or even online leaderboards kills yet another potential for longevity. "Cruis'n Blast" encourages you to replay courses over and over to chase faster completion times, but what's the point in doing that if you can't even show them off to anyone?

Finally, in perhaps the most baffling example of a sneaky advertisement I have ever seen, the notion that "Cruis'n Blast" has 29 unique racecourses is an absolute joke. In reality, we're looking at somewhere closer to seven or eight original courses. See, this game's idea of a "new track" is taking pieces of existing tracks and splicing them together in a different order. It's complicated to explain, almost having to be seen to be believed. As I made my way through the game's various Grand Prix cups, I began to notice sequences repeated from previous tracks. The same series of turns, the same setpieces and the same hidden pathways began showing up in supposedly new and unique courses. Upon further inspection, I did confirm that certain chunks of track design appear multiple times in what the game defines as "unique" courses. Examples include the earthquake sequence and the sequence that has you driving on the side of a building, both of which appear in multiple courses completely unchanged. This practice, more than anything else in "Cruis'n Blast," just left a bad taste in my mouth. While I hesitate to use phrases like "lazy developers" or "false advertising," I think it's hard to deny that such a practice is manipulative and dishonest at best, and this issue alone means I simply can't recommend this game.

I won't mince words here, "Cruis'n Blast" has to be the biggest gaming disappointment of 2021 for me. It's competent in the gameplay and visual departments, but there are so many questionable choices around the gameplay and so little meaningful content to supplement the title's longevity. "Cruis'n Blast" on Switch still feels largely like an arcade title, something that can generate about 15 minutes worth of brilliant fun but without the depth to keep you coming back for more. The problem with that is that you're paying $40 to play it, not $1.00. If you have a group of local friends who love racing games at a base level, you may potentially get a bit more mileage out of this game. For me, though, the shocking lack of content, meaningless unlockables, and omission of any online connectivity at all make "Cruis'n Blast" a huge bust.