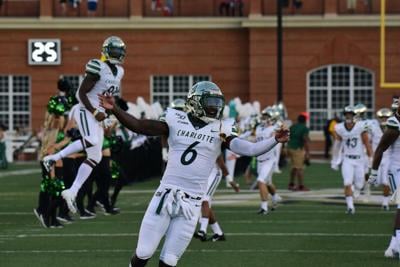 The Charlotte 49er football team is going into one of its most important seasons yet. After setting a school record for wins last season and appearing in a bowl game for the first time, the 49ers will have the spotlight on them as they look to back up a successful 2019 season.

Head Coach Will Healy enters his second season at the helm and will face tough tasks the next few months. After a summer of speculation on whether or not a football season would occur due to the Covid-19 pandemic, the 49ers will take on opponents they have never seen before in their seven year existence that include Duke and North Carolina.

On top of a tough schedule, the 49ers will have to deal with Covid-19 protocols and concerns. Injuries are a concern every season, but now Covid-19 cases could also sideline players.

"Depth is always going to be important, especially this year...because of injuries, but now it’s depth because of positive tests and injuries,” said Healy.

The 49ers return most of its talent from last season on offense including quarterback Chris Reynolds and wide receivers such as Cameron Dollar and Victor Tucker. The players will bring plenty of experience to the team. Charlotte also added running back transfer Tre Harbison from Northern Illinois. Senior running back Aaron McAllister brings experience to the running game after scoring a career-high five touchdowns last season.

Defensive back Ben DeLuca is coming back from injury and transfer Antone Williams from Duke will be a defensive back to watch out for this season. Nafees Lyon will be another experienced defensive back Charlotte can rely on. Defensive end Markees Watts will be a big piece for the 49ers' defensive front seven as he had his best season yet in 2019 with 9.5 sacks. He will help replace Alex Highsmith, who had team-high 14 sacks last season.

"Our roster looks a lot different," said Healy on the new look roster. "But I think all in all I have been very pleased with our progress."

Charlotte will play 11 games this season. Four will be at home and seven will be away games. Below is a breakdown of each game for the 49ers.

The 49ers start their season against a familiar foe in Appalachian State. Charlotte will travel to the Mountaineers to face the 20th ranked team in the country for the third year in a row. The game was added to the schedule late in the summer after some of Charlotte’s opponents went to a conference only schedule. Appalachian State beat the 49ers last season. Charlotte will look to beat the Mountaineers for the first time in its season opener.

The 49ers added North Carolina to the schedule late in the summer after losing another previously scheduled 2020 opponent. The Tar Heels are coming into the season ranked 18th by the Associated Press. It will be the first-ever matchup between the Tar Heels and 49ers. The game will take place at Chapel Hill and no fans will be present.

The 49ers will host their first home game of the season against Georgia State with no fans present. Charlotte looks to avenge their 2017 blowout loss to Georgia State at Jerry Richardson Stadium. Charlotte beat the Panthers in 2015, 23-20.

Charlotte kicks off their Conference USA season in the Sunshine State in an away game against Florida Atlantic. The Owls are the reigning CUSA champions and beat the 49ers 45-27 at Charlotte last year. When visiting the Owls, however, the 49ers are a perfect 2-0.

In a matchup that is right at the halfway point of the season, Charlotte will go for two wins a row against the Mean Green of North Texas. The last time the two teams met, Charlotte got away with a 39-38 victory and went on to finish their regular season with four wins in a row.

The 49ers’ second home game of the season will be against a top CUSA team. Charlotte lost to the Panthers last season, but look to avenge that loss. If Charlotte can pull out the win, it will be the first one for the 49ers against the Panthers in school history.

Charlotte will face its second ACC opponent of the season when they face the Blue Devils in Durham. It will mark the first time Charlotte has played Duke and mark an end to the 49ers’ tough non-conference schedule. The game will feature two veteran quarterback in Reynolds (Charlotte) and Chase Brice from Duke.

After picking up their first win against Middle Tennessee last year, Charlotte looks to make it two in a row in a conference matchup. With this game being one of the last of the season, it will most likely be an important contest for both teams.

After a bye week, Charlotte will take a familiar face in Marshall. The last time these two teams met, Charlotte beat the Thundering Herd at home last season to clinch their first bowl eligible season in school history. This time Charlotte will play at Marshall.

In their season finale, Charlotte will face a Western Kentucky team they lost to by 16 points last season. However, the last time Charlotte hosted the Hilltoppers was in 2018, and the 49ers won 40-14. With the last game of the season usually having a lot on the line, the 49ers could use a win.