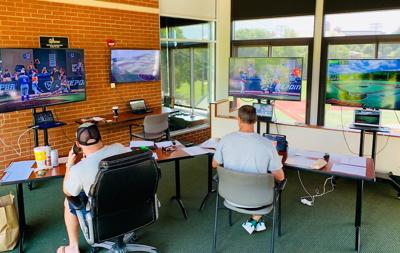 The 2020 Charlotte baseball season was cut short due to the Covid-19 pandemic, but it was a year full of promise for the baseball program with wins over North Carolina State and a series sweep over St. John's University. It was also the first year for new recruiting coach Toby Bicknell who comes from a prestigious background of coaching at many different colleges. The short season definitely showed great promise for what is to come.

“This first season was a lot of fun and it was great to get up everyday to come work with these players,” said Bicknell. “I had to get used to the campus and the city because it was the first time I had been back in a decade but I felt welcomed the minute I stepped foot on campus."

It was an interesting time trying to adapt with the new world that we live in. Online visits and phone calls have seemed to become the new normal for not just Charlotte’s program but for all programs across the country. The staff has been using video from teams and venues to get the advantage on scouting certain players. Using TrackMan, a device that tracks players pitching speed and hitting velocity, can tell a lot about a player's body of work. Even though it has been a crazy year, just being able to call up players to see if they are staying healthy, how they are doing academically or just checking on their families can go a long way in the development of these student athletes.

“Recruiting is a team effort that takes the whole staff to do and it can be hard but it is worth it at the end of the day," said Bicknell.

There is so much to sell on the up and coming progam. With a flourishing athletic department and city that is behind its players and staff, the stock rising for the baseball team makes recruiting easier during a pandemic.

“It doesn’t take a rocket scientist to see we have an awesome campus,” said Bicknell.

Bicknell went in depth about how Head Coach Robert Woodard has a resume full of winning that speaks for itself and makes players want to be a part of something greater.

“Coach Woodard has a great amount of experience on winning and getting to Omaha [which is home to the college world series] so we have a great leader at the top which is so important” said Bicknell.

With so much optimism going into next year and the future it has to make students excited for what they will see on the field. The future is bright with second year coaches Robert Woodard and Toby Bicknell. There is so much to build on in the coming years. Bicknell hopes to see solid recruiting turn into success for the program.

“We want to create a legacy of winning because at the end of the day it is not about where we are going but how do we get there,” said Bicknell. “We want to win a title and bring it home for all the students and fans."