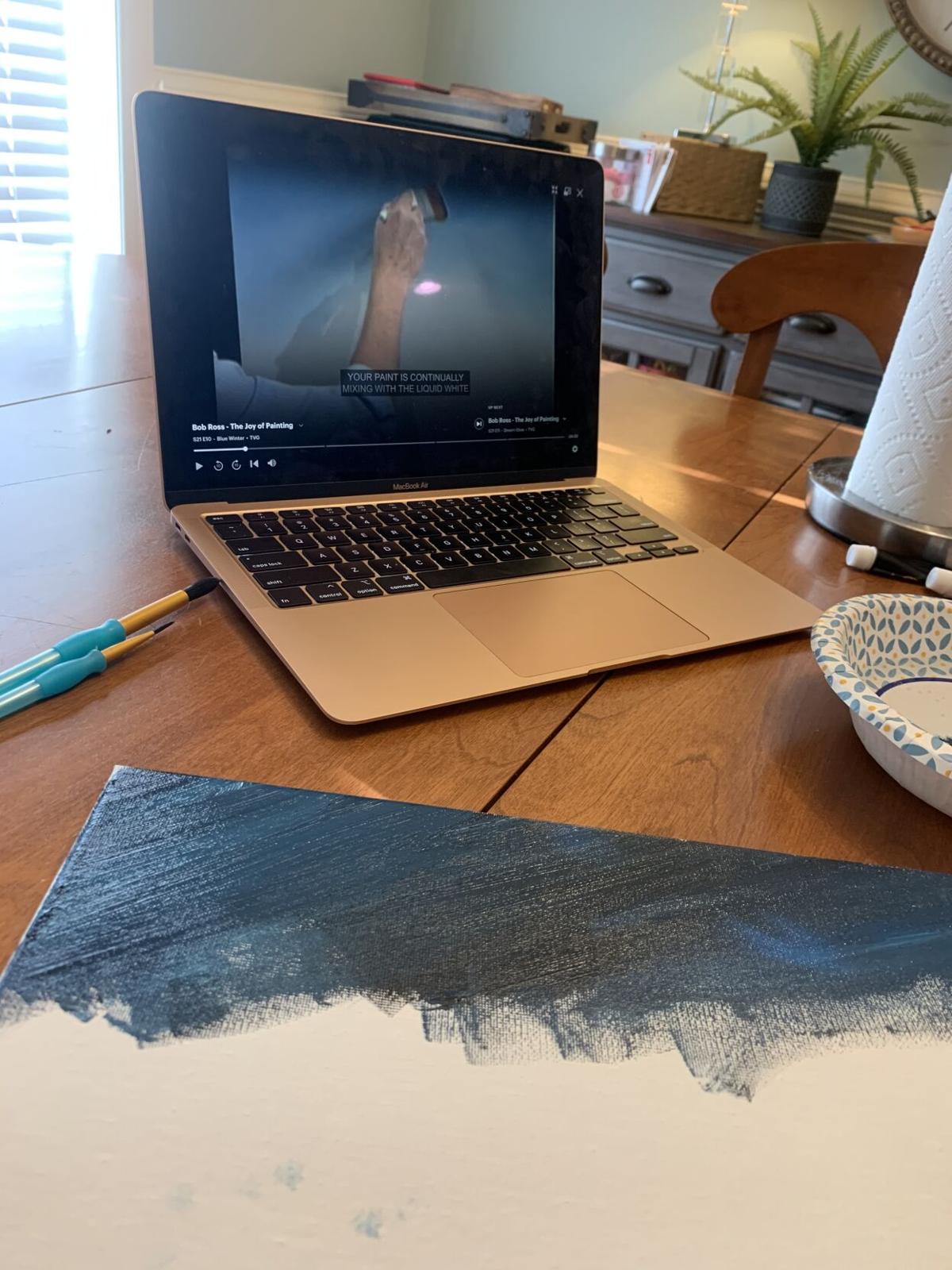 (Starting with the sky base; already proving to be a challenge) 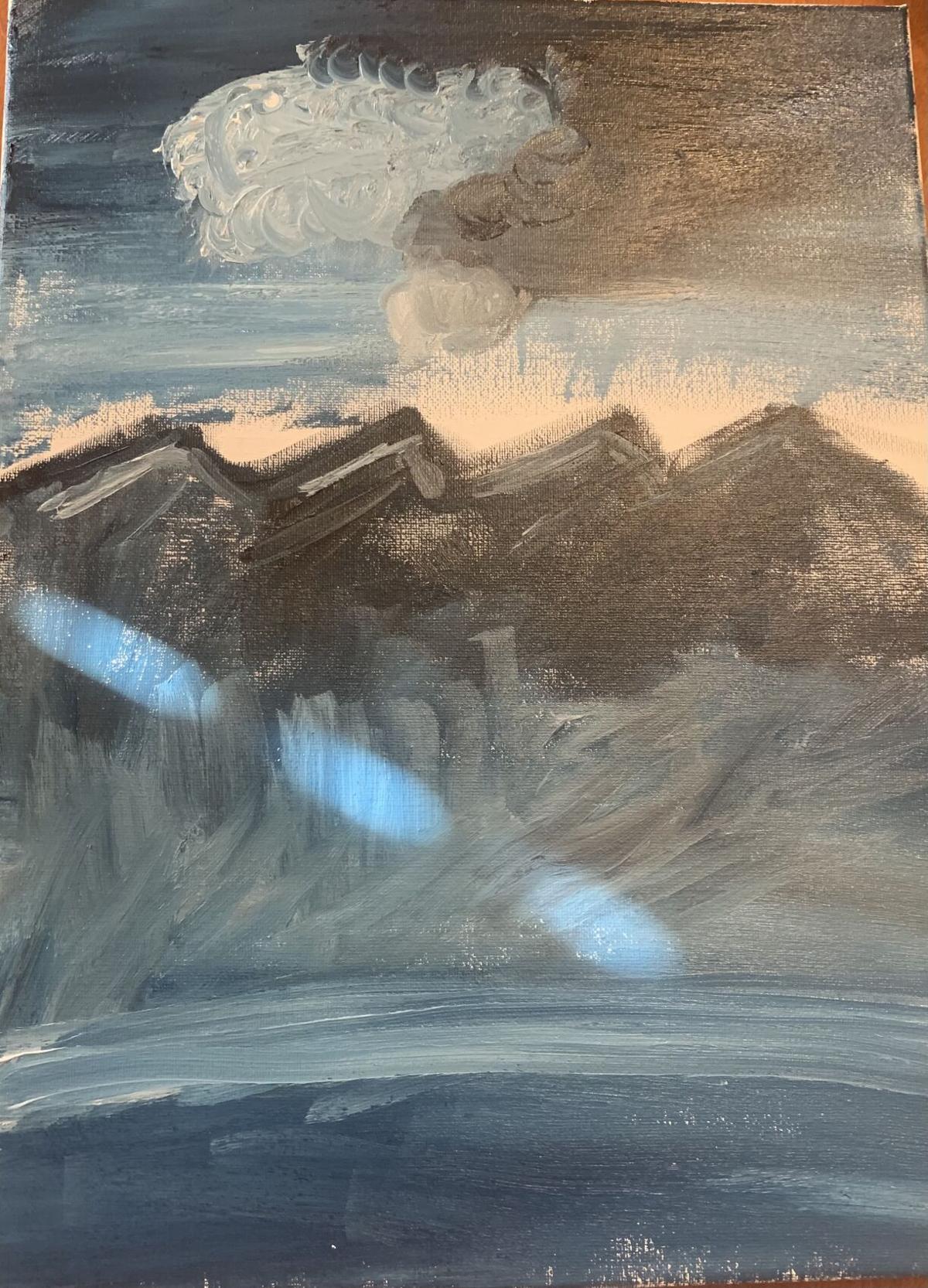 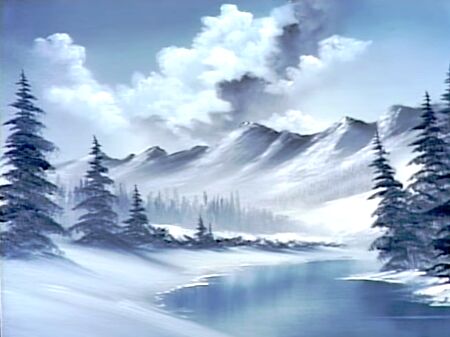 Bob Ross is an iconic painter who became very well known for his show “The Joy of Painting.” His soothing voice and calm disposition is what has caused many to join in. Ross guides viewers to easily complete a beautiful landscape painting. Ross makes it look simple, so I decided to try to follow one of his tutorials myself.

Bob Ross uses a technique called “alla prima,” meaning paint is applied wet on wet without letting earlier layers dry. He also uses oil paint to complete his works. The first step was to gather our supplies: oil paint, canvases and paint brushes. I went to Michael's to pick up my supplies and then was ready to get started.

Seasons 20-25 of “The Joy of Painting” are available on Hulu. I chose Season 21 episode 10 entitled “Blue Winter.” This painting only required three oil paint colors: Titanium White, Prussian Blue and Midnight Black. Ross explained that his goal was to create a cooler tone winter painting as opposed to his usual warmer tones.

I have to say, from the very beginning I could tell my artistic abilities were not going to compare to those of Bob Ross. Within the first two minutes I found myself lost and confused as to how I could make my painting look like Ross’s. I found it a bit difficult to follow what he was saying both in the beginning and throughout the duration of the painting. Though Bob Ross is very calm and relaxed, he moves very quickly and effortlessly while painting which is nice when watching, but can be very difficult when trying to follow along.

We had to begin our painting by creating a blueish sky with the Prussian Blue color. Ross gives modification suggestions throughout the episode to help your painting stay unique. In the beginning, Ross suggested adding either more Titanium White for a more blue sky or, for a more intense and stormy/overcast sky, more Midnight Black.

My canvas looked very different from Bob Ross’s and the shades used were different (mine looked much darker), his just looked better in general.

One of the most challenging things I encountered during this project was using oil paint. I am not familiar with oil paint, mostly used to regular paint and, even more so, water color paints. Oil paint is very thick and hard to spread without a large brush. It also gets everywhere and is hard to get out. I found it on my shirt, shoes, hands, table, etc. I immediately had to put soap on my sweatshirt to help get the oil out and then wash it. Thankfully, it came out but it was a pain.

After finishing the sky, we added some clouds. Bob Ross’s clouds looked amazing and almost realistic. Mine looked like Santa’s unkept beard. I could not figure out how to use the same technique as him to create such fluffy beautiful clouds. Next, we painted the bottom of the canvas and tried to connect it to the sky while leaving a small gap. In this small gap is where we began to create our mountains. Ross suggested making defined peaks for the mountains. He also said that the rest of the mountains did not have to be as structured. I tried to do this as best as I could but, once again, it was hard to make mountains that looked like Bob Ross’.

Finally, we added the finishing touches. This included any extra blending/shading, clouds, snow on the mountains and little trees (which I could not figure out how to do). In the end, my painting looked very different from Bob Ross’s and I also had paint everywhere. They looked absolutely nothing alike. I set my painting out to dry which took a few days to do. It was a very fun experience and I am glad I gave it a shot. However, I think I’d rather stick to watching Bob Ross do his painting magic than try to attempt it myself again.