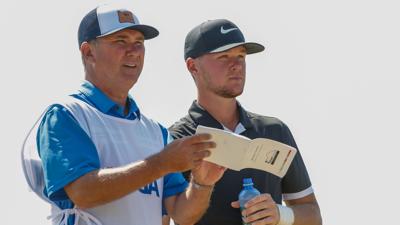 Many Charlotte 49er athletes haven't been able to compete throughout the summer due to the ongoing coronavirus pandemic.

Over the last two weeks, however, Charlotte’s men’s and women’s golf teams have had players make history in the U.S. Amateur events.

On the week of Aug. 3-9, Cecilie Finne-Ispen and Siarra Stout played in the Women’s U.S. Amateur in Rockville, Maryland. The duo were the first Charlotte women golfers ever to compete in the U.S. Amateur.

“It is such a prestigious event with an amazing field of competition and certainly an experience they will never forget,” said Head Coach Holly Clark before the event took place.

Finne-Ispen shot 74 and 73 in her first two rounds of stroke play to place 26th and advance to match play. Stout had a couple of tough days in stroke play and did not make the cut.

As a #32 seed, Finee-Ispen took down Allisen Corpuz of USC with several birdies. She advanced to the round of 32 but fell to Rachel Heck of Stanford.

On the week of Aug. 10-16, Matt Sharpstene and John Gough traveled to Oregon to play at Brandon Dunes Golf Course in the U.S. Men’s Amateur. Both players advanced to match play. Gough finished 2-under to place tied for 23rd in stroke play, while Sharpstene finished tied for 48th (+1).

Once stroke play was over, a new challenge arose as the players entered match play.

In the round of 64, Gough lost in a tough match to Segundo Oliva Pinto in 19 holes. Pinto birded the only playoff hole to seal the deal.

The new Charlotte transfer, who spent the last couple years apart of the West Virginia golf program, is no stranger to success. Sharpstene has played in numerous big tournaments throughout his amateur career, but all the cameras on him as he made his deep run was something new. The tournament was broadcasted on the Golf Channel.

“I hadn't been in front of a camera before,” said Sharpstene of his early nerves. “That first match helped me calm down a lot.”

With only eight golfers left in the quarterfinals, he had all eyes on him and delivered in the high-pressure moment. Sharpstene birdied the first hole and held the lead the rest of the way to advance to the semifinals.

The dominant quarterfinals match set up a semifinal match between Sharpstene and Charles Osborne. The two golfers were tied for the first four holes until Osborne birdied the fifth. After more back-and-forth, Osborne birdied four holes on the back nine to best Sharpstene.

Even though he didn’t get the result he wanted, Sharpstene knows the tournament is a sign of what’s to come in the future.

“I had a camera in front of me or behind me basically every shot,” said Sharpstene. “I definitely think it will prepare me for what’s to come.”

With the tournament in the rearview mirror, Sharpstene looks to the future playing for his hometown college.

“It means a lot to me because I am from Charlotte,” said Sharpstene. “It was good to represent Charlotte and kinda put us on the map. Not many schools can say they had two players make the U.S. Amateur.”