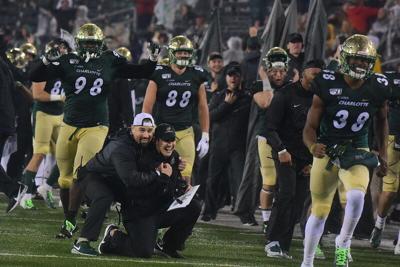 Charlotte football hosted their first day of preseason camp on Friday, August 7 to prepare for the 2020 season after its most successful season in school history.

The 49ers posted a 7-5 record and made their first-ever bowl game since the program started in 2013. After a long break away from full practices, Charlotte looks to get back in the swing of things.

The 49ers have a new look after the athletic department went through a re-brand this summer that came with new logos.

“It was fun to be back out there,” Charlotte Head Coach Will Healy said. “Obviously a new look, a new helmet and new logo were fun to see first hand for the first time.”

Unlike other years, there are a lot of questions still surrounding the 2020 season due to the coronavirus pandemic. During an era where social distancing must be enforced while practicing, Healy says the new protocols have been something his team has had to get used to.

“I can promise you I have never had the start of camp feel this way, where you’re answering a lot of questions for your players even more so than you’re installing any scheme or culture [and] our players have handled it very well.”

Out of all the unknowns going into this season, the start of play will be the biggest for the 49ers. Charlotte was supposed to start the year at Tennessee on Sept. 5. After the SEC nixed non-conference for their teams, that leaves the Sept. 5 date open for Charlotte. Currently, Charlotte will start their season Sept. 19.

Healy looks to keep his players fresh and ready for when the first game comes about.

“It’s different,” Healy said, not knowing the exact start of the season. Our biggest job is that we communicate what we know to the players. I think they need to understand that if we do have our first game pushed back a little bit then we are going to be really careful with making sure they are fresh.”

The team has been back on campus since June 15 but hasn’t had full speed practice until now. From freshman to fifth-year seniors, this season will be unlike anything else for everyone involved.

Above everything, Healy looks to make sure the young players and veterans feel safe while prepping for a long and grueling season.

“I think the important part about it is the guys feel comfortable with what our protocol is and what we’re doing to keep them safe,” Healy said. “They’re all going through it for the first time.”

Charlotte is scheduled to play their first game of the season on Sept. 19 at ACC powerhouse, North Carolina.