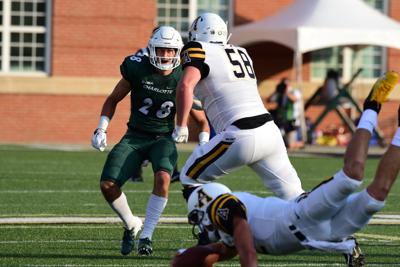 Sep. 7, 2019 was just any other day, but for Ben DeLuca, it was a crushing day that changed the rest of his junior season. DeLuca severely injured his shoulder just two games into the year which caused him to miss the remainder of the 2019 football season.

Almost one year to the day, the defensive back is healthy and ready to get back on the field with the rest of his 49er teammates after a difficult off-season.

“It’s definitely been a long road but I’m just thankful to be here,” DeLuca said. “It’s been a tumultuous off-season. The biggest thing is I’ve been working with the personal trainer individually since I got injured. After surgery, the recovery was challenging. The quarantine made it a little more difficult, but I was still able to see the trainer.”

DeLuca enters the 2020 season as a three-year starter for the 49ers after suffering a season-ending shoulder injury last year in a loss to Appalachian State. In his Charlotte career, DeLuca has appeared in 37 games and started in 32 of those games, including every game of the 2018 season. Although DeLuca wasn’t a part of the team for the majority of last season due to his injury, he still remained a key part to the 49ers success by staying engaged with the team and being a leader off the field.

“As I look back, I can say it was definitely a blessing in disguise because it allowed me to take a step back,” DeLuca said. “It was the first time in my entire life I wasn’t playing football since I started at five years old. The opportunity to take a step back, still be a valued member of the team, and use my leadership role which I [used to] influenced the guys.”

The redshirt senior had the misfortune of missing out on Charlotte’s best football season in program history where the team finished with a 7-6 record and appeared in their first bowl game.

“I think the hardest thing was seeing Benny [LeMay], Cam [Clark], and Jeff [Gemmell] just do all the things they did and not be able to help produce with them,” DeLuca said. “But the guys carried the load and [made] the first bowl game in the history of the school which is awesome.”

Heading into the 2020 season, DeLuca was named to the 2020 All-Conference USA preseason football team that was voted on by the league’s 14 coaches. This is the second time DeLuca has made the all-conference preseason team as he was listed on the 2018 all-Conference USA list after making it as an honorable mention in 2017. DeLuca’s breakout season came in his sophomore season when he recorded 102 tackles and six pass deflections. Also that season, DeLuca led the FBS with five forced fumbles, the first 49er player to lead the NCAA in any statistical category.

In his successful 49er career, DeLuca has accumulated a total of 265 tackles, which ranks third all-time at Charlotte. The 22-year-old is just 41 tackles shy of the all-time school record of 306 tackles which was set last year by linebacker Jeff Gemmell. Although he admits that it would be an honor to be at the top of the record books for tackles, DeLuca’s focus revolves around being the best teammate possible and winning football games.

“I obviously would think that’d be really cool [to set the record],” DeLuca said. “I’m more focused right now on the process of how I’m going to help my team every day. Right now, I just gotta focus on the details, practices, meetings and things of that nature and you’ll look up at the end of the season and you’ll just be happy and blessed that the process took care of the end result.”

Charlotte’s season opener will be an emotional one for DeLuca as the 49ers open the season on the road against Appalachian State, the same team and stadium where he injured his shoulder last season. DeLuca admitted it’s been exciting to see games like Chapel Hill and App State added to their schedule as it helps focus on the preparation when going against their great programs.

“It’s exciting. In the quarantine, I’m thinking we’re heading to Knoxville week one and now you’re getting to play a team like Chapel Hill,” DeLuca said. “We didn’t know if we were gonna play Duke for a while so it’s kinda that excitement where you don’t know who you’ll play but it makes you focus that much more on the process and your preparation because you know you’re going to play games so just making sure you’re prepared for whoever it is.”

“Appalachian State has a great roster,” DeLuca said. "They have a really deep receiver class with a lot of guys that have played so just looking forward to the opportunity to beat their great program.”

Throughout the off-season, the Charlotte coaching staff put a lot of emphasis on defense and adding depth to the defensive positions after all the injuries and the loss of key starters. With DeLuca returning and numerous off-season additions, the 49ers will have the luxury this year of being able to rotate players in and out of the game often.

“Having Ben DeLuca back is a big deal,” Charlotte Head Coach Will Healy said.

For DeLuca, the overarching goal isn’t about being the all-time leader in tackles for Charlotte or trying to meet high expectations; rather, it’s taking the season one game at a time and building a foundation for future players heading into the program.

“We always say ‘raise the standard and once the standard is set, continue to raise the bar.’ I think that’s what we’ve consistently done through the years,” DeLuca said. “Last year, we took a great leap and I think this year, we’re just trying to continue to build. The foundation is set but that’s not what we’re aiming for; we try to aim above it and continue to stack bricks on bricks and build a great foundation for the guys that come into this program five years from now.”