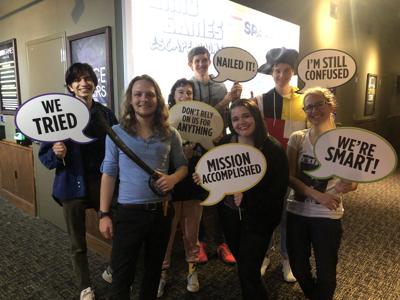 Last Sunday, several members of the Niner Times staff embarked on a trip to uncover lost pirate treasure and break an ancient curse. Spare Time Huntersville invited us to come try one of their 60 minute escape rooms, “Captain’s Cove.” Here’s what we thought about it:

“My experience with escape rooms, like most of our group, was limited. I have done one other escape rooms before this. It was mansion themed, and my group did not successfully complete it. In my opinion, the pirate theme was well done, but I do think more could have been done in regards to the ‘curse’ aspect. I feel like it could’ve felt a little scarier at times. Curses are scary, and I think more jump scares or scarier effects could have made the escape room feel more real and feel like more of an adventure. However, in regards to difficulty, I do think it is at a good level. We used two out of our three hints, and most of the puzzles did require us to think hard and work together. We finished the room with 14 minutes to spare. So I definitely don’t think it was too easy. All in all, I would definitely go to Spare Time Huntersville and try another one of their rooms; my rating is a 9/10.”

“I think that the room’s biggest strength was its commitment to the theme. I felt fully immersed in the pirate ship. Personally, I wish that the hunt for ‘cursed’ pirate treasure could have had a couple scares to make the whole experience more exhilarating. Most of the puzzles were just difficult enough to feel satisfying; however, I think that some of the puzzles could benefit from being harder. I literally guessed my way through one of them in well under a minute. Overall, I would recommend Spare Time Huntersville and will probably come again, but I do hope they make some slight tweaks to it over time.”

“This was my first escape room ever and I was not sure what to expect exactly. It ended up being a super fun experience. I felt the theme was well done. The puzzles were pretty balanced; we were able to solve the entire room, but it was challenging enough to give a sense of accomplishment. The space was broken up into three segments with a new room being unlocked as pieces were solved. I really liked how they did this. It definitely added a further sense of excitement as we opened new areas to explore. The max group size for this room was eight people. We went with seven, and I felt it was a little crowded, so it was sometimes hard to keep track of what everyone was doing and what new pieces were unlocked. It wasn’t horrible though, just a little hectic. Overall I would rate the experience a 9/10.”

“Before going into this escape room, the only one I had ever done before was one with a video game theme. That is probably the one escape room I thought I could be good at (we did escape), so going into a more traditional one like Captain’s Cove was exciting to me. I used to have an obsession with pirate history around the time of “Pirates of the Carribean,’ so naturally I found that the environment was super cool and pretty immersive overall. I felt like with seven people it did get a bit crowded at certain points, but I very much loved my time with it all the same. Even if the only real use I was for the group was in reaching high places. I would definitely recommend it for anyone looking for a unique way to hang out with friends.”

“Prior to this, I've done an escape room once in my life. My friends and I were completely stumped. Nothing made sense. The theming was...fine. We didn't make it out. Luckily, this experience was VASTLY different. While we used two of our three hints, many of the puzzles we could solve ourselves! It felt just the right mix of easy and hard. Most importantly, I thought the theming was absolutely fantastic. I loved the props, furniture and the way the room was compartmentalized with different parts to unlock! It was way more immersive than I was expecting from an escape room in a bowling alley. I would 100% recommend it and would even visit again.”