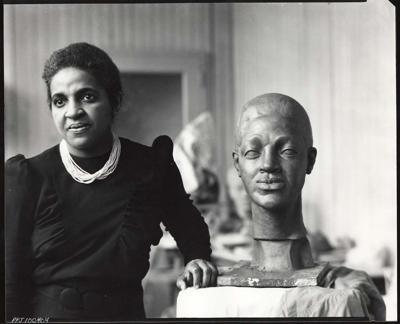 Selma Burke was born on December 31, 1900, in Mooresville, North Carolina, the seventh of 10 children of Neil and Mary Colfield Burke. Her father was an AME Church Minister who worked on the railroads for additional income. As a child, she attended a one-room segregated schoolhouse, and often played with the riverbed clay found near her home. She would later describe the feeling of squeezing the clay through her fingers as a first encounter with sculpture, saying "It was there in 1907 that I discovered me." Burke's interest in sculpture was encouraged by her maternal grandmother, a painter, although her mother thought she should pursue a more financially stable career.

Burke attended Winston-Salem State University before graduating in 1924 from the St. Agnes Training School for Nurses in Raleigh. She married a childhood friend, Durant Woodward, in 1928, although the marriage ended with his death less than a year later. She later moved to Harlem to work as a private nurse.

After moving to New York City, in 1935 Burke became involved with the Harlem Renaissance cultural movement through her relationship with the writer Claude McKay, with whom she shared an apartment in the Hell's Kitchen neighborhood of Manhattan. The relationship was brief and tumultuous – McKay would destroy her clay models when he did not find the work to be up to his standards – but it introduced Burke to an artistic community that would support her burgeoning career. Burke began teaching for the Harlem Community Arts Center under the leadership of sculptor Augusta Savage, and would go on to work for the Works Progress Administration on the New Deal Federal Art Project. One of her WPA works, a bust of Booker T. Washington, was given to Frederick Douglass High School in Manhattan in 1936.

Burke traveled to Europe twice in the 1930s, first on a Rosenwald fellowship to study sculpture in Vienna in 1933-34. She returned in 1936 to study in Paris with Aristide Maillol. While in Paris she met Henri Matisse, who praised her work. One of her most significant works from this period is "Frau Keller" (1937), a portrait of a German-Jewish woman in response to the rising Nazi threat which would convince Burke to leave Europe later that year.

Burke returned to the United States and enrolled at Columbia University, where she would receive a Master of Fine Arts degree in 1941.

In 1949 Burke married architect Herman Kobbe, and moved with him to an artists' colony in New Hope, Pennsylvania. Kobbe died in 1955, and Burke continued to live in Pennsylvania until her death in 1995, at the age of 94.