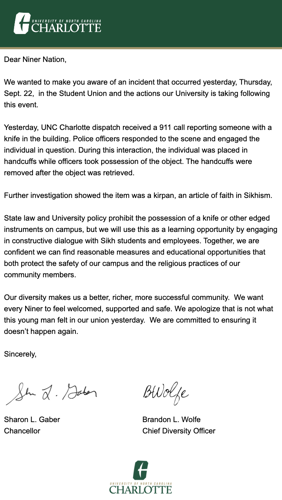 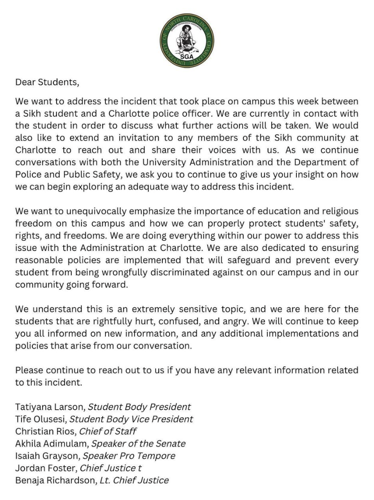 Note: The individuals involved in this incident have requested to remain anonymous. This article has been updated to include the Chancellor's statement from Sept. 29.

A Sikh student was detained by UNC Charlotte Police on Thursday, Sept. 22, for wearing a kirpan in Popp Martin Student Union. The incident was brought to light through social media and the student's tweet the following day, containing a video of his interaction with the police. The tweet went viral in less than 24 hours and has amassed over 1.7 million views since. The video has been retweeted at least 14,600 times and shared on various Instagram accounts.

I wasn’t going to post this, but I don’t think I will receive any support from @unccharlotte . I was told someone called 911 and reported me, and I got cuffed for “resisting” because I refused to let the officer take my kirpan out of the miyaan. @CLTNinerNews pic.twitter.com/Vk9b0Tspvm

The student was sitting inside the Union when approached by the UNC Charlotte Police Department. The police responded after receiving a 911 report describing a student with a knife.

The reported knife was a kirpan from the Sikh faith. The kirpan is one of the five articles of faith (the Five Ks) that initiated Sikhs are expected to wear at all times. The kirpan is worn strapped to the body, symbolizing the freedom of spirit and fighting injustice.

In the video of the incident, the police officer can be seen reaching over the student, as he is seated, in an attempt to take the kirpan. After struggling to remove the kirpan out of the miyaan—the sheath holding the kirpan—the officer has the student get out of the seat and proceeds to handcuff him. At this point, the student appears to be cooperating with the officer.

Police Officer: "You can not have this…[obstructed]."

Police Officer: "If you would stand up for a second."

Student: "What are you doing to me, bro?"

Police Officer: "So right now you're being detained."

After the events of the video, the student was detained for roughly an hour, and the kirpan was confiscated.

The student tweeted about the incident through at 5:22 p.m. on Friday, Sept. 23, which includes the video and a description of the incident.

The student tweeted an update at 10:28 a.m. on Saturday, Sept. 24, sharing that he received his kirpan back from the police.

Update for the masses: I received my kirpan back 🙏🏽 thank you all for the continuous support.

Since the incident, multiple Sikh community Instagram pages have reposted the video. These pages include the California Sikh Youth Alliance (CSYA) and the Sikh Press Association (Sikh PA).

In an Instagram post shared by the CSYA (@the_csya) and the Sikh PA (@sikhpa), the student's brother said, "This exact same incident happened to me twice at his school [UNC Charlotte] when I would drive down to visit. Three years of this treatment and nothing has changed."

As of 8:45 p.m. on Sept. 24, the student's original tweet has received 1.7 million views, 14,600 retweets, 1,185 quote tweets, and 47,700 likes. On Instagram, the video and posts regarding the incident have been reshared on Instagram stories by Charlotte students, members of the Sikh community and more.

After describing the incident, Gaber and Wolfe said, "we will use this as a learning opportunity by engaging in constructive dialogue with Sikh students and employees. Together, we are confident we can find reasonable measures and educational opportunities that both protect the safety of our campus and the religious practices of our community members."

Gaber and Wolfe apologize and are "committed to ensuring it doesn't happen again."

The Student Government Association (SGA) also released a statement at 6 p.m. on Sept. 24. Student Body President Tatiyana Larson also featured the statement on her Instagram page. The SGA said, "We are doing everything within our power to address this issue with the Administration at Charlotte. We are also dedicated to ensuring reasonable policies are implemented that will safeguard and prevent every student from being wrongfully discriminated against."

According to their statement, the SGA is in contact with the student, University Administration and the Department of Police and Public Safety. They also invite members of the Sikh community to share their insights and voices surrounding the incident.

On Sept. 29, Gaber and Wolfe sent a follow-up statement outlining the University's action after the incident. They are providing support and resources to those affected and are communicating with the Sikh community. The University is also revising its Weapons on Campus policy to "[accommodate] the religious faith of our employees and students while protecting the safety of our campus" and is expanding cultural training opportunities. Gaber and Wolfe said the incident is "a chance for us to be better [and create] a stronger, more united community."

The Niner Times is committed to keeping UNC Charlotte and the greater community updated as more information is available.