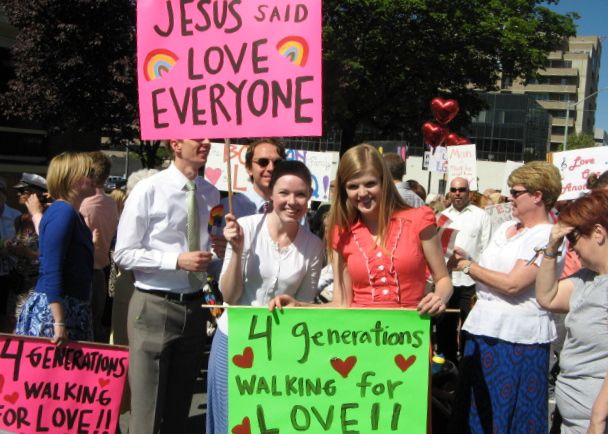 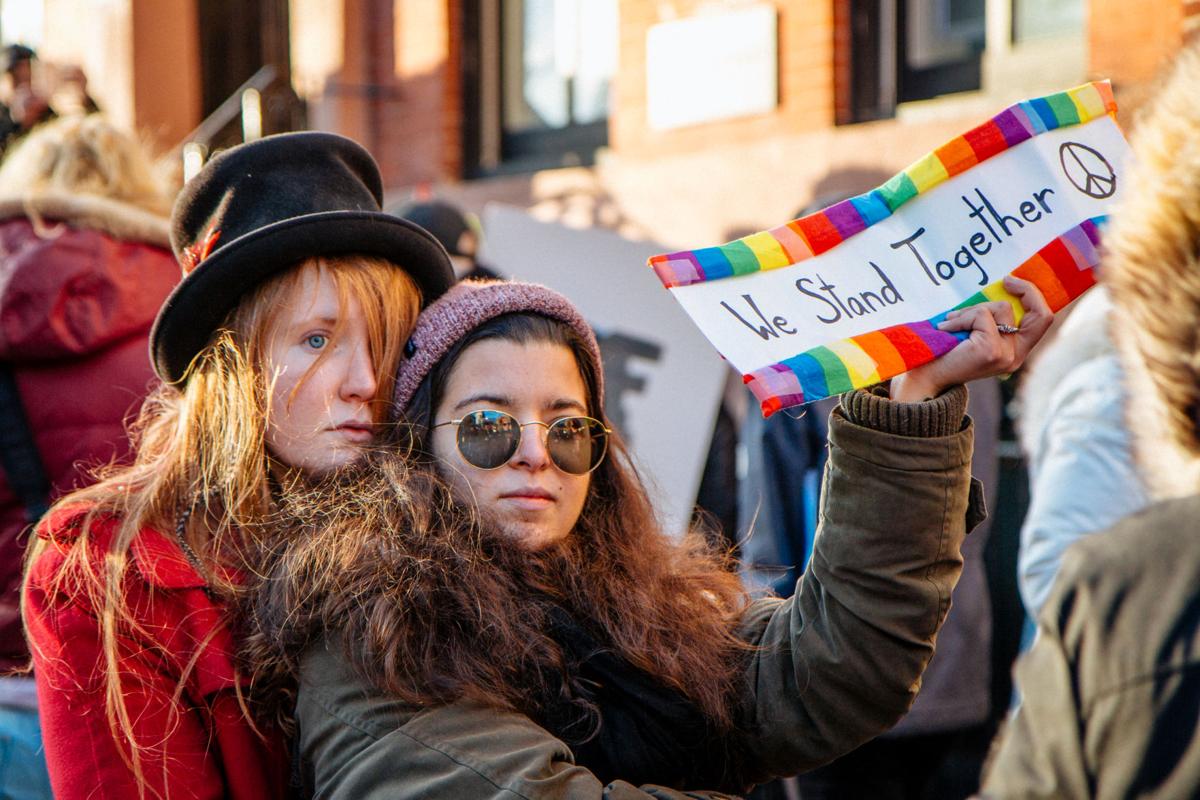 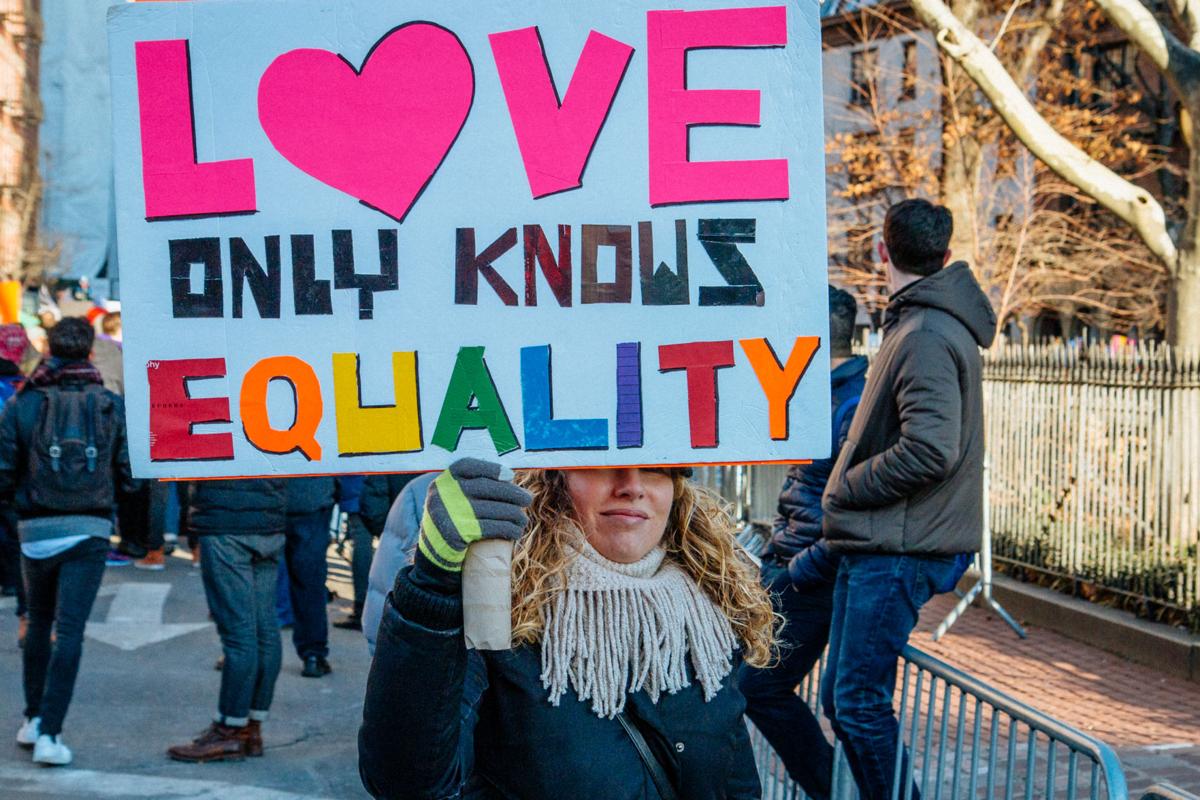 You’d have to be living under a rock (or maybe University Crossings) to not know who they are. Two skinny white guys in khakis and tucked-in t-shirts, a girl in a bonnet and an ankle-length cotton dress, all toting a couple kids and some very, very graphic signs. They make a habit of standing in front of the student union and shouting Old-Testament-based vitriol at passerby. I saw these folks at Charlotte Pride. I did my best to ignore them then. But when a midday trip to Wendy’s necessitated passing by them and listening to their anti-gay rhetoric, I elected to give them exactly what they wanted: attention. I called two of my roommates, Grey and Michael, and asked them to haul my six-foot rainbow flag down to CHHS. What resulted was seven hours of bafflingly inane protest: we danced, we had picnics, we chanted, we practiced geography with a couple of vloggers, we got free ice cream, and pet several dogs. It started out as just us and a couple friends eating pizza at the protesters’ feet; it ended with a full-blown group shout-fest, with attendance clocking at about forty or fifty. As Tuesdays go, it was pretty bizarre. This truly silly experience prompted a much more significant ideological conflict: how welcome should protest be on college campuses? With violent hate speech on the rise and an increasingly polarized political environment, the risk of having extremist adherents on campus may prove to be greater than universities are willing to bear. Take UC Berkeley: in February, ultra-conservative and self-described “internet troll” Milo Yiannopoulos planned to give a speech sponsored by one of the university’s student groups—and was met with violent opposition.

And this isn’t just a Berkeley issue: schools around the country have seen fights break out between students and protesters. UNCC is no different. On Tuesday, one student (who wishes to remain anonymous) had a very intense confrontation with one of the protesters. We were positive that the argument was about to get physical, so we separated them and pulled the student off to the side. They were so frustrated by the encounter that they cried for about ten minutes afterwards. “He just wouldn’t listen,” they recounted. “It was as if he couldn’t even hear me.” I’m no conservative. I’m no liberal either. And I’m not even halfway through my first-year Comparative Politics class. But I don’t think it takes a degree in political science to see that protests like these get us nowhere. Free speech, as the founding fathers intended it to be (and as our university system interprets it), is supposed to foster intellectual improvement. People are supposed to walk away from these events feeling curious and more open-minded. And while a couple folks seemed to enjoy debating with these people for a few minutes, the vast majority of those I spoke to throughout the day seemed to hate it. Christian students would dash over between classes and apologize profusely for the behavior of “these so-called disciples.” War veterans passing by found the gory image of a dismembered child extremely disturbing. And the rest of us were just tired of hearing medically inaccurate descriptions of gay sex. Very few of us walked away feeling as though we had a productive, positive academic discussion; most of us were just sunburnt, exhausted, and feeling as though we had dodged a bullet.

As one junior put it, “It’s really hard to keep your temper in check when they’re screaming at you, and you know that if you make, like, one wrong move, like even just poking their wrist, then you’re getting sued or beat on.” That’s not to say it wasn’t manageable. Next time I see those guys, you can be sure that I’ll be bopping around their fire-and-brimstone signage chanting “all dogs are gay.” Not because it was fun skipping classes, but because they will return. Since UNC Charlotte is a publicly funded university, the First Amendment can be exercised anywhere on campus public spaces. As long as they’re not using speakers or attacking one person in particular, every zealot and his mother can carry a baby-corpse sign and yell about lesbians. From now until the United States collapses; liability and student health be damned. So if you’re still feeling raw about all this, here’s my opinion: don’t go cursing the chancellor, don’t go printing out nice and accepting Bible verses to read out to Crocs-and-socks preachers, and do NOT let these people get to you, because believe me, they’re going to outlast you. My own mother remembers seeing these guys traipsing around UC Davis in the 90s—an online petition sure as heck isn’t going to change that. What we can change is our attitudes. I don’t mean convert to Nazism, I mean, appreciate how ridiculous this situation is. These folks clock in at 9, scream about abortion, and clock out at 5. They’re paid to be jerks. How crazy is that? They’re out here looking like extras for Little House on the Prairie . Their kids are running barefoot on the concrete in 90-degree weather. What’s up with that? And then maybe, when you’ve had a laugh about how ludicrous the Year of Our Lord 2017 is, join us in being louder and more ridiculous than them. Because if they can do it, why can’t we? As my roommate Michael said, “If we’re annoying enough, maybe they’ll leave!” Go on, UNCC. Dust off those picket signs and get a little silly. There’s plenty of ice cream and chants to go around.