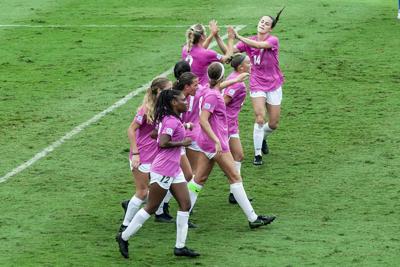 Tough. Resilient. Gritty. A few adjectives to describe the 2019 Charlotte 49ers women’s soccer team. After an impressive 10-3 start and 5-1 conference record, this team has locked in the best start in club history since 2013. This is from an unwavering belief in their coaches and themselves starting the season with four away games a tough ask for any team. They stepped up, walking away 3-1.

“To come back 3-1 after a four-game road trip is a strong sort of statement by the players,” said Head Coach John Cullen about the start of the season.

A statement was made that these ladies are focused; they are all in. That does not just happen overnight. This team has something valuable, something coaches spend months to create. The Charlotte 49ers have a culture in which they practice just as hard as they play. Sprinting and cutting hard in walkthroughs, nobody is slouching. You can feel the intensity in a light practice a day before Southern Miss. For this team it's business and they want to make sure they are ready and that you can see and hear the engagement and the body language on the field. This is who they are.

“Last year our practices weren’t as intense as they needed to be and that was our focus this year; to try and make them more intense and it basically comes from us getting each other through it and making sure we’re all working as hard as we need to work and staying at that intense level,” said Junior Midfielder and Defender Brianna Morris.

“It’s amazing. It’s unfortunate that we couldn’t score during the games like this Western Kentucky game. We’ve gone back and had to come back twice, but it’s great that we keep going throughout the whole game and making it to overtime and coming out with a win,” said Morris.

No matter how big the moment is and no matter how long it takes, the 49ers do not quit and the moment they see the opponent quiver, they will pounce.

Coach John Cullen speaks about the intensity of practice and the standard they hold their players to: “We try to create an intensity, so on game day, we’re not going to be taken off guard. We’ve got a good competitive spirit in the group. They work hard because they know that the next girl up is just as good and they want to play.”

The depth of this team is highlighted by contributions from their freshman player Julia Patrum who was asked to take on a bigger role due to injuries and who has scored four goals in three matches now.

“Goal scorers always like to score goals,” said Cullen. “I think that gives them that extra confidence but up until that point even though she hadn’t scored I was very proud of her performances. Her performance levels have been good, her commitment to the team has been good, her overall level of play has been excellent. I knew the goals would come and hopefully, this is just the start.”

“Our goal this year is to get back to that championship level form, any game we play we’re capable of winning,” said Cullen.

The Charlotte 49ers women’s soccer team wants to win another championship, something they did in 2016 when they earned the title of 2016 Conference USA Champions. The way their season is shaping up it sure looks like that is the way it could end.