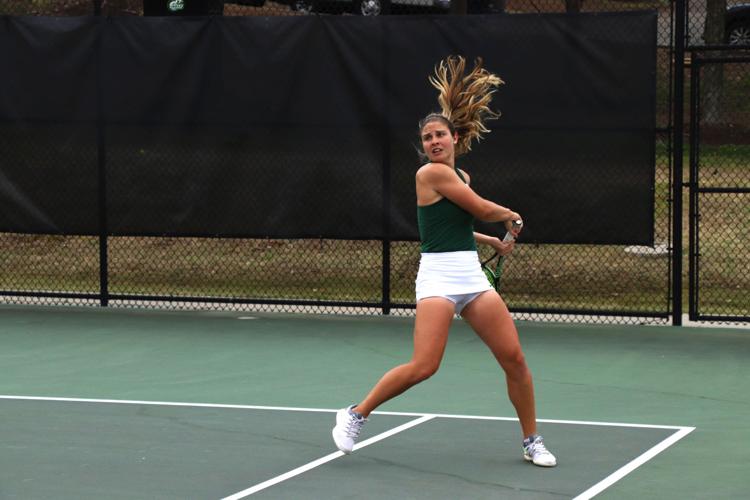 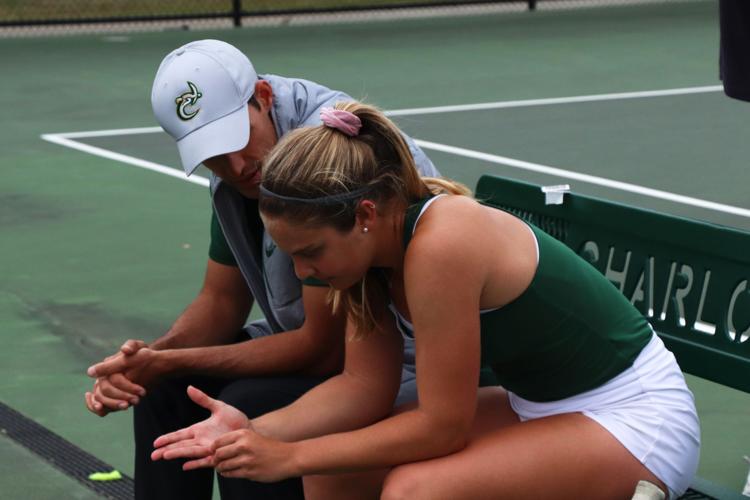 When you’re far away from home, it is hard to adapt to everything going on around you, let alone having to handle academics and athletics at the same time. Just ask Rocio Safont who is over 4,000 miles away from home.

“I came to America with no English, so it was really hard for me. I was homesick so I missed my family and friends, but I am doing better now.” said Safont.

Safont is a 5-foot-7-inch sophomore on the Charlotte Women’s Tennis team. She was born on Jan. 15, 1999 in Borriana, Spain to José Safont Muñoz and Inmaculada Branchadell Renau. She has an older brother who played basketball, but stopped so he could go to college. Safont started playing tennis at just four years old. She is full of athleticism and loves all sports, so she participated in basketball and soccer until she realized her true talent lied in tennis.

At Safont’s prep school, Salesianos San Juan Batista, she was amongst the top tennis players. Safont earned a No. 61 overall ranking for the Women’s Open Spanish. While in her early teenage years, and even before, Safont reached goals and standards that most athletes do not otherwise achieve at such a young age.

She was a Valenciana Member of regional team finalists in U12 and U14. She claimed titles at many large Open tournaments such as Vall d’Uxo, Nules, Borriana, and Vinaroz. Safont was crowned the U14 and U16 Privincial Circuit of Castello Champion while also winning the U14 Babolat Cup in Valencia. After winning titles at the U15 and U16 OUATT Doubles World Final Tournaments in France, Safont made a semifinal appearance at the Spanish Championships by regions with Comunidad.

Before she knew it, she was being looked at by colleges in the States, which is what she wanted.

“In Spain, it is very difficult to play a sport and be in college. You either go pro or start your degree and have to quit tennis,” said Safont. “Coming [to Charlotte] was an opportunity for me to play tennis and study.”

Charlotte reached out to Safont and she received her first collegiate offer from the previous coaching staff, Michaela Gorman and Caroline Price.

“The coaches had confidence in me and I really liked the campus; it is beautiful. The weather is beautiful here as well.” said Safont.

Safont is just as happy with the new coaching staff, Anthony Davison and Brooke Buckner, and her experience at Charlotte has been great so far.

Coming in with an undecided major, Safont ended up choosing to declare International Business.

Safont had an outstanding freshman season as she added plenty of accomplishments to her list, athletically and academically.

In the fall of 2018, Safont was named to the Athletic Director’s List and to the Chancellor’s List in spring 2019 while being added to the Conference USA Academic Honor Roll.

After leading the tennis squad with nine single victories in the fall, Safont contributed to the doubles wins as well. She paired with Megan Smith and they won their doubles bracket at the North Carolina Central University Invitational by beating UNCW and Campbell. Mixing up the pairs landed Safont with Tai Martin. The duo defeated Appalachian State and Elon at the Wake Forest Invitational for back-to-back victories.

In spring of 2018, Safont found herself leading the team with 12 single triumphs which gave her 21 on the year. That number made for another award under her name. She became the first 49er to break 20 single wins since Natsuko Takayanagi in 2014-15. Safont was the first freshman to achieve that milestone since Ana Spivakovsky in 2006-07.

“I enjoy playing tennis even though it is really hard and the days are long.” said Safont.

It’s clear that Safont adapted to the American ways and has excelled in athletics and academics here at Charlotte. While being so far from home, she isn’t able to go back to Spain often. Safont went home for Christmas last year for just two weeks, but she knows that’s how it goes while being a student athlete.

Safont has earned her way here at Charlotte and enjoyed her experience while doing it. She looks forward to the future as a 49er.

“I really like Charlotte a lot. I like the coaches and my teammates, they are amazing. I have a family here.” said Safont.

Catch Safont in a tennis match next spring at the Halton-Wagner Tennis Complex!