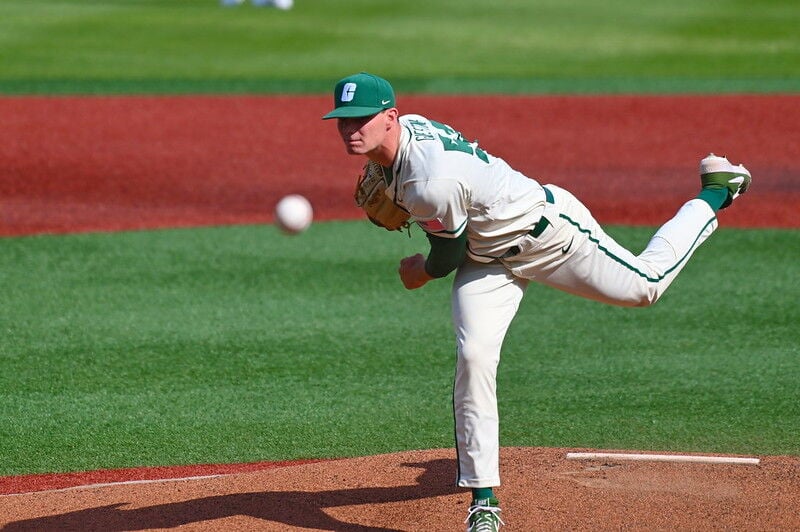 Charlotte's Spencer Giesting (#54) throws a pitch during the weekend series against Marshall. 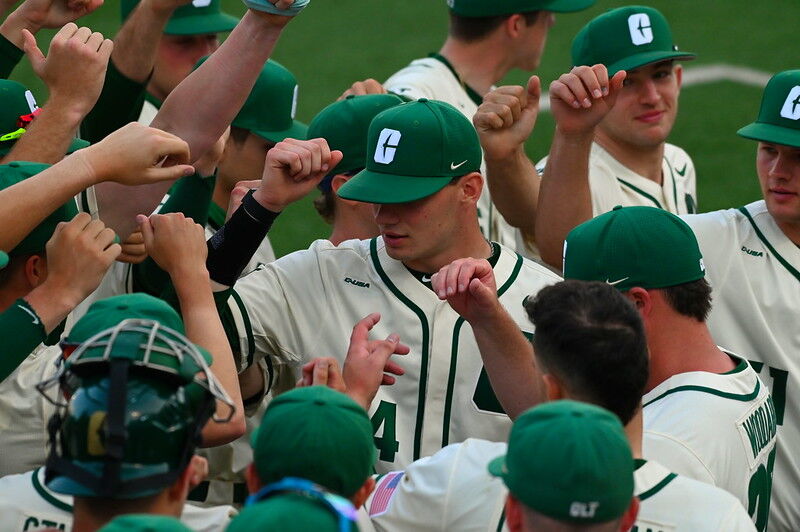 Charlotte baseball huddles during the weekend seres against Marshall.

Charlotte's Spencer Giesting (#54) throws a pitch during the weekend series against Marshall.

Charlotte baseball huddles during the weekend seres against Marshall.

On Mother's Day weekend, the Charlotte 49er baseball team bounced back from a series loss against Old Dominion last weekend and swept Marshall in the four-game weekend series, winning 7-5, 10-8, 12- and 6-3.

"I'll cherish the memory of being on the field today with our seniors and yesterday with our graduates. We've been through a lot together, still have more to go through together, and that's exciting," said Head Coach Woodard.

It was a special weekend for the Niners as they celebrated their players graduating before Saturday's doubleheader and also celebrated the senior players Sunday morning before the final game of the series.

The Niners were able to carry over the joy of the celebrations to get the job done, winning every game and growing their conference lead over Old Dominion to three games with only one conference series left on the season.

The first two games were more offensive battles, with each team trading blows, flipping the lead back and forth.

Charlotte won the first game on Friday night in the bottom of the 7th inning off of a solo home run by Austin Knight to give the Niners a 6-5 lead that they held onto to end it.

On Saturday, they won the second game of the series on a four-run bottom of the 6th inning, giving Charlotte a 10-8 lead to take game one of the doubleheader.

Game three of the series was a great performance on both sides of the plate for the 49ers as they won 12-3 after they took the lead in the first inning and never gave it up.

Mother's Day afternoon, the Niners closed out the sweep, winning by taking the lead in the bottom of the fifth inning off of an RBI single by Carson Johnson. Nick Turnbull led the team on the mound to win that game throwing four no-hit innings in relief.

Stars of the series

The stars of the series were batters Austin Knight and Will Butcher. The stars on the mound were Nick Turnbull and Spencer Giesting.

Knight on the weekend batted .400, scoring seven runs while knocking in four RBIs. He also hit one double and one home run while being walked twice and stealing two bases.

"I don't lose any sleep at night on whether Austin Knight is a good player; he's a huge part of our success and what we do. He's also a great example for our guys on how to go about it and play the game and be a great player on both sides of the ball," said Woodard.

Butcher hit .285 over the weekend with two home runs and scored four times while knocking in five RBIs against the Herd.

Turnbull garnered the victory in Sunday's game, throwing four innings in relief while allowing no hits or runs, walking just two batters and striking out four.

In Giesting's first start of the year in game three, he pitched a seven-inning complete game allowing just three runs on five hits and three walks. He was also able to strike out eleven batters.

"That's always really encouraging throughout the weekend. To see our team increase their level of play over the weekend, I'm excited to carry that into the new week," stated Woodard.

The Niners travel to Houston to take on the Rice Owls next weekend for the last conference series of the season.