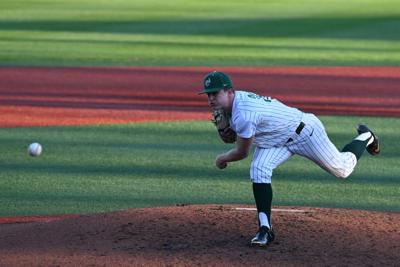 The Charlotte 49ers fell behind early on the road at UNC-Greensboro and couldn’t recover in a 4-6 loss on Tuesday, Feb. 25.

Carson Johnson and Dominic Pilolli gave Charlotte back-to-back singles to start the game off. Ground outs from Rafi Vazquez and David McCabe brought a run in and gave the 49ers a 1-0 lead.

From there, Charlotte contained the Spartans. In the top of the fourth, Vazquez got on base with a single. McCabe then got on base with a double right up the middle. Craig Keuchel and Todd Elwood both got base to bring in two runs to make it only a 5-3 UNCG lead.

Greensboro’s Zack Budzik hit his first homerun of the year in the bottom of the fourth to extend their lead to 6-4.

Charlotte gave UNCG everything they had in a comeback attempt. In the ninth inning, the bases were loaded but a groundout ended the game and gave UNCG the win. A potential game-changing McCabe hit was ruled a foul ball that put a dent in Charlotte’s comeback chances.

The 49ers out-hit the Spartans 11-9 despite the loss. Johnson extended his hit streak to nine games while Vazquez and McCabe have four-game hitting streaks.

The 49ers had help from their pitching staff as Colby Bruce and Nick Turnbull threw a combined 4.1 scoreless innings while also striking out five UNCG batters.

The 49ers will now go into the weekend looking to bounce back against St. Johns in a three-game home-stand starting Friday, Feb. 28.