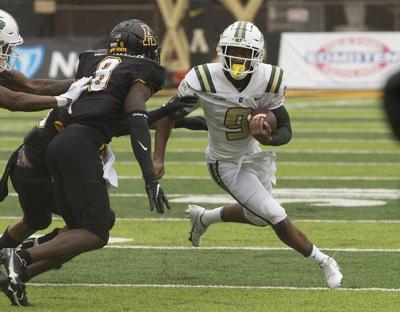 The Charlotte 49ers had a hard-fought battle in Boone against the Appalachian State Mountaineers on Saturday, Sept. 13. A battle that was impacted by weather as well. The Niners fought hard through the rain but was not enough to stop the Mountaineers offense. App State won 35-20.

"I thought for the most part that we had pretty great energy," said Charlotte Head Coach Will Healy of the tough loss. "They (Appalachian State) are a great football team."

The Charlotte defense started very strong. As they forced a fumble at the goal line on their first defensive drive of the game, the offense responded to that turnover by driving down the field for a touchdown by Tre Harbison. The defense held strong the rest of the quarter to hold the Mountaineers offense to zero points in the first quarter.

The Appalachian State offense began to get going as they scored two touchdowns in the second quarter. First came a 16-yard run from Camrun People’s and the second came from a one-yard run by Marcus Williams.

The Charlotte offense was able to pick it back up though after a big 41-yard throw by Chris Reynolds to Taylor Thompson. The Niners were able to get a field goal from Jonathan Cruz to make the score 10-14 later in the second quarter.

The Appalachian State offense drove down the field to set up for a field goal to end the half. The Charlotte special teams prevailed though as they blocked the field goal attempt as time expired.

The Niners defense showed their strength once again as they forced another turnover midway through the third quarter. The chariot offense was able to drive down the field and score three more points off a Jonathan Cruz 49-yard field goal. After a big 51-yard touchdown reception by Appalachian States Thomas Hennigan, Charlotte responded with a 97-yard kickoff return by Aaron McAllister. That kickoff return was the longest in Charlotte's history.

The Charlotte 49ers were down 20-21 going into the fourth quarter. Unfortunately for the Niners, the Mountaineers began to pull away in the fourth quarter. Appalachian State scored two rushing touchdowns from Daetrich Harrington. After the final whistle blew, the Appalachian State Mountaineers defeated the Charlotte 49ers 35-20.

McAllister hopes he and his team can put the past behind them and get ready for the next task.

"Just stay humble, keeping fighting," said McAllister of what the 49ers need to do moving forward. "We need to have a great week of preparation for UNC and go in and execute."

The Charlotte 49ers travel to Chapel Hill next week to take on the 18th ranked North Carolina Tar Heels on Sept. 19 at 3:30 p.m.