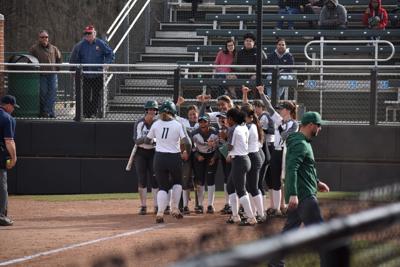 The 49ers found themselves down 2-0 at the bottom of the second inning. Maggie Cannon and Devereaux each gave Charlotte one RBI to tie the score at 2-2 entering the third inning. The 49ers field and pitching held the Camels without a run in the third inning, and Imani Rochelle tallied an RBI to give Charlotte its first lead of the game. However, in the top of the fourth inning, Diana Parker recorded two RBIs. Noemi Cortez and MacKenzie Parker also scored runs to swing the lead back to Campbell. Vannoy recorded her second RBI of the game to tie the score at four.

Charlotte pitcher Carson Pace closed the game by holding the Camels scoreless throughout the final three innings and recording two strikeouts while only allowing one hit.

Sophomores Rochelle and Vannoy and senior Spenser Gray propelled the 49ers to a 10-2 rout of Winthrop. After two innings, the 49ers had a 6-2 lead over the Eagles. Riley Krueger initiated the 49ers’ scoring spree by hitting a double that resulted in Rochelle, Vannoy, and Gray scoring runs.

In the third inning, Winthrop and Charlotte pitchers combined only allowed one hit, and no runs were scored. However, Charlotte scored a run the next two innings, then put the game away with a two-run performance in the bottom of the sixth inning.

Charlotte defeated Campbell 4-3 in the twelfth inning. The 49ers methodically built a 2-0 lead through the first two innings, as Vannoy and Gray recorded RBIs in the first and second inning while pitcher Maddux Hughes kept the Camels honest at bat.

However, Hughes’ arm started to fade in the third inning, allowing a home run and two additional hits. The Camels took advantage and tied the score at two. As a result, Charlotte Head Coach Ashley Chastain replaced Hughes with Carson Pace. Through nine innings, Pace only allowed five hits and one run. At the bottom of the twelfth inning, Cori Henderson stole home plate to lift the 49ers to a 4-3 victory.

The 49ers put on a batting clinic in the first game of their Sunday doubleheader. It took Charlotte twelve hits to accumulate 14 runs. Gray led the 49ers by connecting on two hits and scoring three runs. Krueger produced the most well-rounded performance, registering two hits and two runs in two at-bat appearances.

At the end of the second inning, Charlotte’s lead was 9-1. The 49ers continued to bat well and build upon their lead so much so that the fifth inning was not played.

In large part due to quality hitting from Ashley Westbrooks, the Eagles only trailed the 49ers by two runs entering the sixth inning. However, Vannoy gave Charlotte a decisive advantage late in the sixth inning by hitting a home run that allowed Cori Henderson, Devereaux, and herself to score runs. Trailing by seven entering the seventh inning, the Eagles dug themselves in a hole too deep to climb out of, as Pace only allowed one hit in the seventh inning.

Charlotte pitchers Pace and Wright allowed a combined eight hits and two runs during the 49ers 9-2 victory against Winthrop.