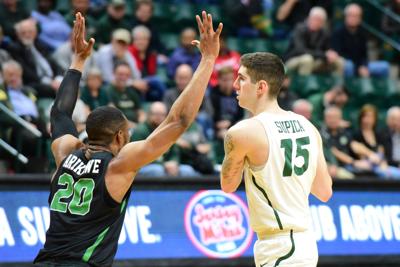 Charlotte takes on Conference USA opponent FIU Sunday, March 1 at 2 p.m. in Halton Arena. The 49ers look to follow up after a big road win against Western Kentucky.

Jordan Shepherd, Charlotte: Shepherd is averaging 14 points per game shooting 45.7 percent from the field. In the 49ers last game against WKU, Shepherd distributed the ball at a very efficient level. He had 10 assists and zero turnovers. His distribution will be key against FIU.

Devon Andrews, FIU: FIU’s Devon Andrews is coming off back-to-back 20 plus point performances and will look to continue this run against the 49ers. In these games, Andrews shot a staggering 62.5 percent from three-point range.

Keys to the game

Charlotte: The 49ers will need to contain FIU’s senior guard Devon Andrews. Andrews averages 16.6 points per game and is shooting 44.1 percent from the field. Charlotte will look to slow his dribble-drive down and keep him off the three-point line as well. The Niners will also need to limit their turnovers while averaging 14 per game. It is essential that Charlotte protects the basketball.

FIU: FIU will try to force Charlotte to turn the ball over. FIU forces slightly over nine turnovers a game and will try and impose that come Sunday. They will need to keep the 49ers off the glass as well. Over the last five games, Charlotte’s freshman guard Jahmir Young has averaged over seven rebounds a game. Rebounding will be a point of emphasis for FIU to eliminate Charlotte’s second chance points.

“It is good to be back home in front of our fans,” Head Coach Ron Sanchez said during the pre-game interview.

Coach Sanchez stated that he was very proud of his guys for the perseverance they showed against WKU. He hopes that some of the passion they played with “spills over” into their next game against FIU.

“I love giving credit to the coaching staff publicly for their hard work and dedication to the program. They have been servants to the fullest,” said Sanchez.

This game has major implications on each team's place in the conference. Charlotte and FIU are fourth and fifth place in C-USA respectively. A win by either team could help to improve or hurt their C-USA tournament seeding in two weeks.