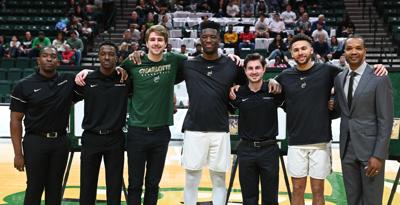 Charlotte lost a tough game against conference opponent FIU in the 49ers’ first game back in Halton Arena since Feb. 8. It was Charlotte’s senior day and FIU did everything it took to spoil it for the 49ers.

Both teams got off to a slow start only scoring a combined 20 points through the first 10 minutes of gameplay. After falling behind 9-4, Charlotte went on a 7-0 scoring run to take the lead with 11 minutes to go in the half.

FIU closed the half with a three-point basket by Trejon Jacob. The Panthers led 32-30 going into the half. Charlotte shot 45.2 percent from the field and FIU shot 48 percent in the first half.

The second half started with an all out blitz by the Panthers going on a 12-0 scoring run with just 13:48 remaining in the game. Charlotte could never seem to gain a foothold and everytime they would seem to slow FIU down, the Panthers would make another big play to keep the momentum on their side till the end of the game.

FIU big man Osasumwen Osaghae owned the paint this game grabbing a total of 12 rebounds, four of which were offensive rebounds. He also had four blocks as well as 19 points, all of which came in the paint.

Charlotte guard Jahmir Young led the 49ers in scoring with 14 points. Five of those came from the free throw line where he shot a very efficient 5-6 for the game. Jordan Shepard contributed 11 points as well. Shepard and Young combined for nearly half of Charlotte’s points.

“I didn’t think that we played very well at all today,” Head Coach Ron Sanchez said after the game. Coach also said that the team gave up 21 second chance points and that was not natural to the way that they try to play the game.

Charlotte was outrebounded 33-26 and gave up 11 offensive rebounds. FIU held Young, who had been averaging over seven rebounds a game over the last five games, to just one rebound this game.

“They really disrupt your offense and they force you to make one-on-one plays and with a big man in the middle. It is very hard to get good looks,” Sanchez said.

On two occasions throughout the game, Osaghae’s blocks would lead to a transition score for FIU.

“We didn’t match his intensity today,” Sanchez said when asked about Osaghae.

When asked about missed shots, Sanchez said, “I can promise you these guys don’t miss shots on purpose; it’s just about figuring some things out and adjusting.”

Charlotte has two more games left in the regular season and will need to win these games in order to try and get the best seed possible in the Conference USA tournament one week from now.

The 49ers are back in action on Wednesday, March 4 at 7 p.m. to take on North Texas at home.