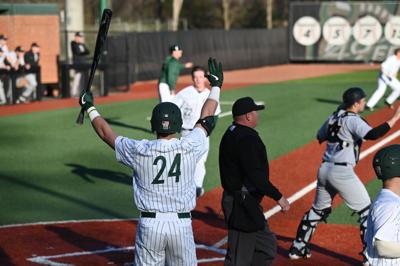 To say that the Charlotte pitchers played well this weekend would be an understatement. The 49ers pitching squad shut out UMBC twice and dominated the other two games, resulting in a 4-0 weekend for the Niners.

"Thirty-six innings in four days and to have that level of focus was tough to do,” Head Coach Robert Woodard said. “I thought our hitters did a fantastic job of staying in the strike zone and trying to do damage. I was really proud of our guys.”

Dominic Pilolli dominated the weekend for Charlotte, finishing with 10 hits, two homeruns and six RBIs for the weekend.

Game one of the series was dominated by Bryce McGowan and Patrick Szczypinski, who combined to allow only five hits, strikeout 10 batters and allowed no runs in Charlotte’s first shutout of the season.

After one scoreless inning, Charlotte got on the board first in the second inning off a homerun to left center field from Craig Keuchel.

Pilolli led off the sixth inning with a double down the left field line. Back-to-back walks to Rafi Vazquez and David McCabe gave the Niners bases loaded with no outs, which allowed Keuchel to hit a sacrifice fly to center field to bring home Pilolli for the second run of the game. Charlotte loaded the bases again after the next batter but were unable to add any more runs in the inning.

Charlotte was able to load the bases again in the seventh off two walks and a single from Pilolli. This time, Carson Johnson scored off a wild pitch. In the eighth with Jake Whitcomb on second and Josh Haney on first, UMBC threw another wild pitch. With the runners advancing, the Retrievers catcher overthrew the second baseman trying to tag out Haney, which allowed Whitcomb to run home and Haney to advance to third. The Niners left Haney stranded at third but still took a 4-0 lead.

McGowan earned the win for Charlotte on his second start of the season by pitching 6.2 innings, only allowing three hits, three walks and striking out six batters. Szczypinski relieved McGowan and performed just as well, striking out four batters and only allowing two hits in 2.1 innings.

Game two was no different for the 49ers pitching squad as Ryan Czanstkowski was in control for majority of the game. Czanstkowski pitched eight solid innings, struck out four batters and only allowed two hits, two walks and one unearned run.

“Doubleheaders are really hard to manage and it’s a long day, but our guys came ready to play,” Woodard said. “Our guys did a really good job of mixing their pitches, keeping guys off balance and execution with two strikes.”

Charlotte scored the first two runs of the game in the third inning after Johnson doubled to left center field and was followed up by Pilolli who homered to right center field. On the other side, Czanstkowski was dominant on the mound for Charlotte, as he allowed no hits in the first four innings.

However, UMBC earned their first hit of the game in the fifth and scored their first run of the series later that inning off a sacrifice fly to Tate Pennington, who made a diving catch but was unable to stop the runner from scoring.

Johnson started the bottom half of the fifth inning with a single and advanced to second off an error from UMBC. Pilolli followed Johnson up with an RBI single to right field. With Pilolli at second, McCabe hit an RBI single to left field which gave Charlotte a 4-1 lead.

Charlotte increased their lead in the seventh inning when Pilolli led off the inning with a solo homerun to right field, his second of the day. With Pennington on second and McCabe on first, Haney singled up the middle to bring home Pennington which gave Charlotte a 6-1 lead.

Czanstkowski continued to dominate his final three innings pitched and was relieved by Jackson Boss who only faced four batters to close the game out.

The third game of the series was a pitching duel between both teams as the game was held scoreless through the first five innings. UMBC was closest to scoring in the fourth inning when Dmitri Floyd doubled and later advanced to third off a wild pitch but was left stranded.

Charlotte broke the tie in the sixth inning as Johnson hit a leadoff double and Pilloli followed up with an RBI triple to deep right center field. Two batters later, Pilolli was able to score off an RBI single from McCabe, which gave the 49ers a 2-0 lead.

The Niners followed up the sixth with two more runs in the seventh. Haney and Todd Elwood led off the inning by getting on base from an error and a walk. Pilolli was up to bat again and hit an RBI single to left field which brought Haney around to score. Elwood scored on the play after a throwing error from UMBC.

Pilolli dominated at the plate in the doubleheader by hitting a homerun, a triple and had six RBIs.

“Pilolli had a fantastic day for us,” Woodard said. “It felt like he was either driving in runs or scoring for us every single time runs were involved. He was a big part of those two wins today.”

Andrew Roach got the start for Charlotte and threw six scoreless innings, struck out eight batters and only allowed two hits and one walk. Colby Bruce relieved Roach and was just as solid, throwing three innings, allowed one hit and had four strikeouts.

The series finale consisted of a lot more offense than the previous three games. Charlotte got on the board early in the first as McCabe hit an RBI single to left which brought home Johnson. However, UMBC responded in the top half of the second by scoring two runs and taking their first lead of the series. Reese Varley and Blaze O’Saben each hit RBI singles for the Retrievers which gave them a 2-1 lead.

However, Charlotte responded right away and scored at least two runs the next three innings. Jacob Whitley led off with a single and back-to-back walks gave Charlotte bases loaded with no outs. Johnson grounded into a fielder’s choice but brought home Whitley. Elwood scored on the same play off a throwing error from the UMBC shortstop. Vazquez and Haney each drove in runs in the third to give Charlotte a 5-2 lead.

Pilolli led off the fourth with a single and later scored off a homerun from Keuchel. Later in the inning with Vazquez at second, Whitley hit an RBI single up the middle for Charlotte’s eighth run of the game.

With the 49ers leading 8-4, UMBC cut the lead down to two in the seventh after Christian Torres hit an RBI triple and later scored off a sacrifice fly to left field. Charlotte responded later that inning with three runs of their own, starting off with an RBI from McCabe. With two outs and bases loaded, Vazquez and Whitley were each walked back-to-back times which gave Charlotte two easy runs for an 11-6 lead.

UMBC tried to crawl back into the game but were unable to as Nick Tunrbull closed the game out for Charlotte as they completed the four-game series sweep.

Charlotte’s offense was the key to winning the fourth game of the series, as the team combined for 12 hits and 11 walks.

Charlotte returns to action when they take on the UNCG Spartans on Tuesday, Feb. 25 at 4 p.m.