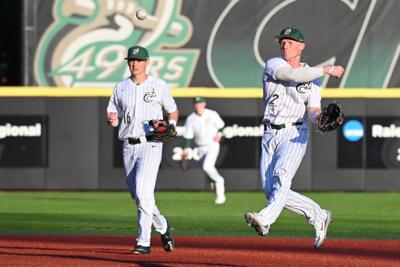 The Charlotte 49ers got their second straight sweep this season by dominating the weekend series over St. John’s. This series was a big one for the Niners as they have a tough road ahead of them with matchups against Coastal Carolina and ECU coming up. Over the weekend, the Niners brought some strong pitching, good hitting and solid defense.

The series kicked off with a dominant performance overall by the Niners. Bryce McGowan had a good performance, allowing only one run on three hits and threw six strikeouts in six innings pitched. McGowan also had a lot of help from the defense who played very well. The Niner offense, led by Carson Johnson, had a strong performance as well. The Niners as a whole had one of their more complete games with their dominant defense and hitting.

Game two had a lot of excitement and took some late game heroics to get the win. Ryan Czanstkowski had a strong showing. He threw seven innings, allowed three hits, two runs, and struck out seven. In the end, it took a Josh Haney ground ball to get the winning run in to give the Niners their second win of the series.

The Niners closed the series with a win after being down early. They pulled ahead later on in the game with Craig Keuchel and Haney driving in a combined four runs in the game. But the Red Storm came roaring back late in the game to put St. John’s within two going into the ninth. Colby Bruce was able to stifle St. John’s come back though and seal a victory and a sweep for the Charlotte 49ers.

The Charlotte 49er offense showed up for this series. Players such as Keuchel, Johnson and Rafi Vazquez helped bring the bats to life. Keuchel had a fantastic series offensively. In 11 plate appearances, he collected four hits and drove in six RBI’s. Haney also had a nice showing, batting a .333 average and driving in three runs over the weekend.

Charlotte’s pitching had a strong weekend overall. Over the course of the series, the Niners' pitching staff held St. John’s to a .196 batting average. Charlotte’s three starting pitchers of the series combined to throw 19 innings and allowed 10 hits, four earned runs and threw 18 strikeouts.

The Charlotte 49ers travel on the road to take on Coastal Carolina on Tuesday, March 3 at 4 p.m.