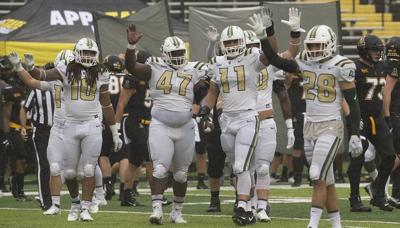 When the Charlotte 49er football team left Boone on Sept. 7, 2019, they had just lost to Appalachian State for the second year in a row.

The game was a barnburner with a 56-41 score in favor of the Mountaineers but was a step in the right direction for the 49ers. They showed they could hang with one of the most consistent programs in the country.

Almost a year later, on Sept. 12, 2020, the 49ers almost left Kidd Brewer Stadium victorious but yet took another step forward. The 49ers lost to App State 35-20 in a tough matchup and were only down a point going into the fourth quarter. The Mountaineers were ranked 20th in the country going into the game. The matchup was televised on ESPN2.

“It was a hard-fought football game,” said 49er Head Coach Will Healy of the loss. “I’m proud of our guys and excited about where our team is but today App was definitely the better football team.”

After the App State loss in 2019, the football program won a school-record seven games and made their first bowl appearance in school history. Charlotte showed they were ready to compete with the best of the best.

Once the COVID-19 pandemic caused some schedule changes for the 49ers, Charlotte had the chance to show what they were about. In a span of a month over the summer, head coach Will Healy and his staff added two nationally-ranked opponents in North Carolina and Appalachian State.

After one of the weirdest off-seasons in recent memory, Charlotte faced Appalachian State on a rainy Saturday afternoon in front of 50 parents and relatives of Appalachian State players, instead of thousands of people.

It was a different atmosphere. There were no screaming fans, snap counts were easier to hear and you could even hear the players talk throughout the game. Running back Aaron McAllister felt a big difference in this year’s matchup against App State compared to other years.

“The difference is better execution and guys wanting to win,” said McAllister. “We didn’t have distractions from any fans. We were locked in and brought our own juice.”

Charlotte stood up to the challenge and showed off why the program is starting to become a well-known name.

In the tough loss, Charlotte stayed within striking distance of the Mountaineers. The 49ers struck first and were only down by four points at halftime. That scene was a lot different from last year where the Mountaineers led the 49ers 28-13 at halftime.

The Mountaineers only lead the 49ers 14-13 throughout the third quarter after a Charlotte field goal. A couple of minutes later App State’s Zac Thomas threw a 51-yard touchdown pass to Thomas Hennigan. With now a 21-13 lead, it appeared the momentum started to shift in Appalachian State’s favor.

However, a lot of new names made a splash for Charlotte.

Transfer Tre Harbison rushed for 87 yards and one touchdown. Freshman tight end Taylor Thompson led the team with 62 receiving yards. Defensive back Ben DeLuca, who missed all of the 2019 season, had 16 total tackles and caused a fumble early in the game. Transfer Tyler Murray had a fumble recovery, forced fumble, 14 tackles, and interception in his debut.

Even though a win wasn’t added in the win column, the 49ers showed that their 7-5 season in 2019 was not a fluke. After creating a buzz in 2019 both on and off the field in 2019, Charlotte created more buzz in just their first game of the season.

With fresh new jerseys that arrived just a day before the game, there was a lot to be excited about for Charlotte going into the game.

The excitement translated onto social media as well throughout the afternoon. The 49ers were trending on twitter with a video of linebacker Peter Agabe dancing all over the field on camera right after a Niner touchdown.

"I don't know what was going on through his head," McAllister joked after the game. "They said bring your own juice, but they didn't say anything about all that. But everybody has their own way of expressing how they feel."

Even after a loss, the 49ers now know they will have a lot of different playmakers moving forward this season. Unlike last year's loss at Appalachian State, Healy believes there's something to happy about.

"Total different environment this year compared last year" said Healy. "Last year I had to worry about them taking it as a moral victory because of what happened the year before that (against Appalachian State). This year I don't have to worry about that."

Healy knows there's still some work to be done to get to the status of team's like Appalachian State.

"We didn't play our best and to beat them we have to play our best," said Healy. Obviously we are not where they are. We have a long way to go but what a good test for our program."