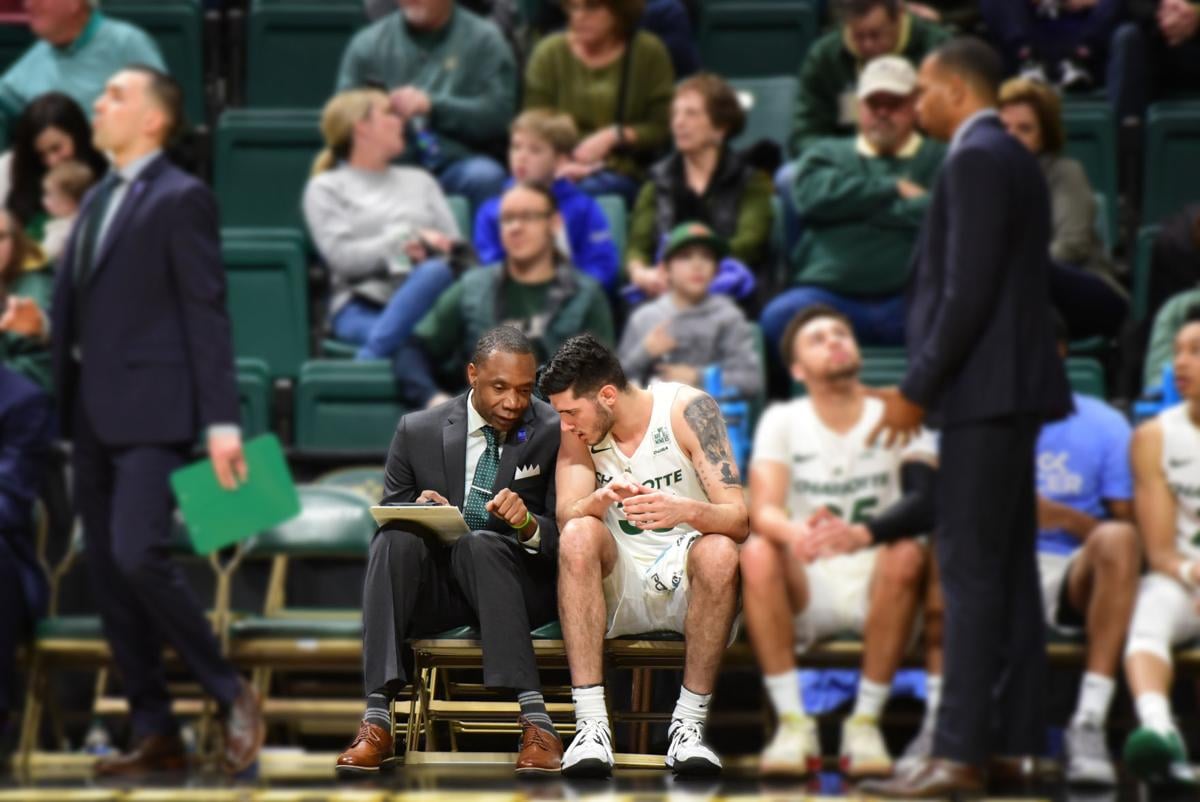 Byron Dinkins talks with Luka Vasic on the bench 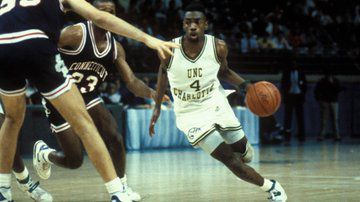 Byron Dinkins bringing the ball up 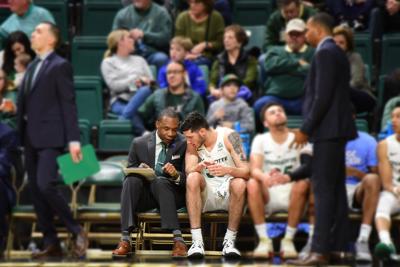 Byron Dinkins talks with Luka Vasic on the bench

“Can I say something bad about him? Because I can’t find anyone that will,” Charlotte 49ers Head Coach Ron Sanchez said about Byron Dinkins.

Dinkins, or “Dink” as he is more well-known, is in his second season as director of player development for the 49ers’ men’s basketball program. He may speak softly, but he has a loud love for basketball and everything that’s come of that love. Those who cross paths with Dinkins are likely to agree with Coach Sanchez. It’s difficult to find someone who has something negative to say.

“It means a lot. I do hear Coach all the time saying, ‘My goal is to find somebody that’s going to say something bad.’ And I think you can, if you look hard enough,” Dinkins said. “But to hear the things that have been said about me around here, it just makes me feel really good about trying to be who I say I am or talking to the kids about a way to do things.”

Asking Dinkins to join his staff was an easy call for Sanchez and was one of the very first calls he made after getting the head coaching gig. A Charlotte alumnus, Dinkins played for the 49ers from 1985-89 after growing up in Charlotte and attending East Mecklenburg High School. In an effort to stay close to his family, he was only really considering a couple schools not far from home and landed at Charlotte without even truly visiting the campus before committing.

Having attended a camp at Charlotte in the ninth grade, Dinkins caught the attention of Melvin Watkins who was an assistant coach at the time. Though he wasn’t really thinking about playing in college just yet, it turned out to be the perfect place for him.

“This place was beautiful even then. And what Coach (Jeff) Mullins was selling was a new attitude: We’re going to make this place good again. I remember the ‘77 team, I remember the final four team. Coach Watkins was coaching on the staff and he was a part of the team, so I wanted to do that; I wanted to help put this program back. And fortunately enough, we did progress each year, and the third year we won the conference tournament and made it to the NCAA, which was a big deal,” Dinkins said. “So I think everybody kind of says our class revitalized the program and now, coming back as a coach, I’m coming back under similar circumstances. Program’s down, haven’t won a lot of games and I tell the guys all the time it can be done because I was a part of it, so you’ve got to believe in what Coach (Sanchez) says.”

Off the top of his head, Dinkins can remember the program’s records from the season before he arrived and each of the years that he played. When the 6’2” guard came into the program, the team was coming off of a 5-23 record in the 1984-85 season. By the time he finished his career as a 49er, he had helped the Niners to achieve three winning seasons, a conference championship, an NIT appearance and to return to the NCAA Tournament for the first time in 11 years.

“You know, I ask him all the time, I say, ‘Dink, does this [season] resemble that?’ You know, because he did live through it...and it is hard. And that's the experience that I'm talking about: that he's been able to share with some of the guys like, ‘Hey, it's okay, this is part of the journey. I traveled it, you know,’” Sanchez said. “So when you get that type of validation from someone who went through it when it was hard, somebody who helped to build it and had personal success and his teams had success, it's just a little more encouraging.”

Dinkins expressed that the current state of Charlotte Men’s Basketball and the way the program was revitalized when he was playing are “eerily similar.” No one wants to speak too soon but it’s hard not to draw the comparison nonetheless.

“You know, we really do look at it and the situations are very similar,” Sanchez said. “I wish that, you know, I could say the results are going to be the same. But him going through it definitely is encouraging for me as a coach and definitely encouraging for the players who at times may hit some type of an obstacle, you know?”

Dinkins wasn’t heavily recruited coming out of high school and didn’t quite see the same potential everyone else saw in him at first. Of course, he just wanted to play and get an education close to home, but as his time playing at the collegiate level was nearing its end, the idea of playing professionally was becoming real.

Dinkins was improving in his sophomore season along with the program as a whole, and by his junior season he’d hear people talking about how he might leave to go to the NBA and forego his senior season. Reluctant to postpone his education, Dinkins stayed at Charlotte for his final season.

At the conclusion of his collegiate career, Dinkins went on to spend two seasons in the NBA, starting with the Houston Rockets as an undrafted free agent in the 1989-90 season. He also played for both the San Antonio Spurs and the Indiana Pacers amidst the 1990-91 season. Following his two-year stint with the NBA, he played three seasons in the CBA which is now the G League.

Dinkins also spent one year playing in Germany, one year in Cyprus and one year playing in the ABA as well as eight years in Greece. The guard led the Greek League in assists in 1996 and in 2000 and had a big hand in Panathinaikos winning the FIBA Intercontinental Cup in 1997. Amidst his professional career, Dinkins returned to Charlotte to complete two more classes to obtain his degree in Human Services in 1995. Before trying his hand at professional basketball, Dinkins made a promise to his mother and to Coach Mullins that he would come back and finish his education.

But Dinkins’ career as basketball player, both collegiately and professionally, was far from the only thing that sold Sanchez on bringing the 49er back to his alma mater.

“Put it like this: First of all...our goals as a staff were not solely performance based as far as winning and losing. You know, we as a staff wanted to make sure that our alumni felt welcome back home. You know, from my discussions with some former players, I had heard that they had not been on campus in a long time, that for some reason they had just kind of moved on with their lives a bit,” Sanchez said. “And we felt that Dink was going to bridge that gap tremendously, almost...seamlessly without any interruption. Like it was just going to happen. And to be honest, it's been 10 times better than I ever thought it would be.”

Connecting people who have been a part of the program in the past and who are a part of it now has been something Dinkins has accomplished simply by being here. Aside from Dinkins’ strong connection to other Charlotte 49ers, his character is what’s more compelling about him.

“The way that people just praised him, you know, for the kind of man that he was. A mentor to young men, a person who...was of tremendous character,” Sanchez said. “I said it in my press conference, you need people that you can struggle with before you can have success. And I knew that he was one of those people...so that made it really, really easy for me to say, ‘Okay, this is the first person that I want to...reach out to for his position.”

Prior to taking the job at Charlotte, Dinkins spent 2010-2016 as the head coach for Northside Christian Academy and 2016-2018 as head coach at Carmel Christian School and had tremendous success in his coaching career overall. A winning record of 210-30 and four state championships came from just those eight seasons. In his time at Northside, the program earned a chance at the state title each of the six seasons he was at the helm.

“I wanted to grow them into young men that could then go out and hopefully function in today’s society and today’s world and have the tools to do that because they’re going to become fathers and husbands and I’ve had some that have called back, ‘Coach, I’m getting married’ or ‘Coach, I just had my first child.’ And those are the rewarding things for me, to see them grow as young men,” Dinkins said. “It wasn’t the basketball part. I had their ear because I had been where they wanted to go and I had done what they wanted to do, so I had their ear then because of basketball. Basketball is just a tool to then implement and instill values and character and work ethic and all those things. Basketball is a tool to do that.”

While his skill and love for the game benefited Dinkins professionally, it also led to meeting his wife in college, opportunities to mentor young men and the ability to travel places he never would’ve experienced. It even landed him back with his hometown Charlotte 49ers.

“The love of the game is always in me and I still love it just as much today because of, I guess what it’s done for me, and I just try to let people know, or let the young people know that this game can take you places,” Dinkins said. “Everybody’s outcome is going to be different. There’s different levels and you might not make it to the NBA, but it might take you to college, so wherever the ball takes you, just put that same amount of effort in and be thankful for that. I just love this game so much.”