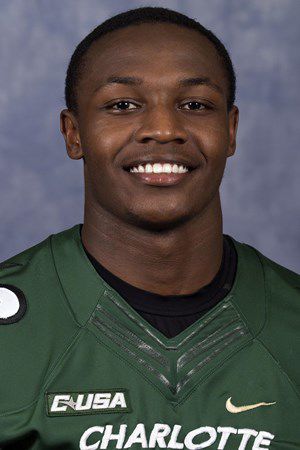 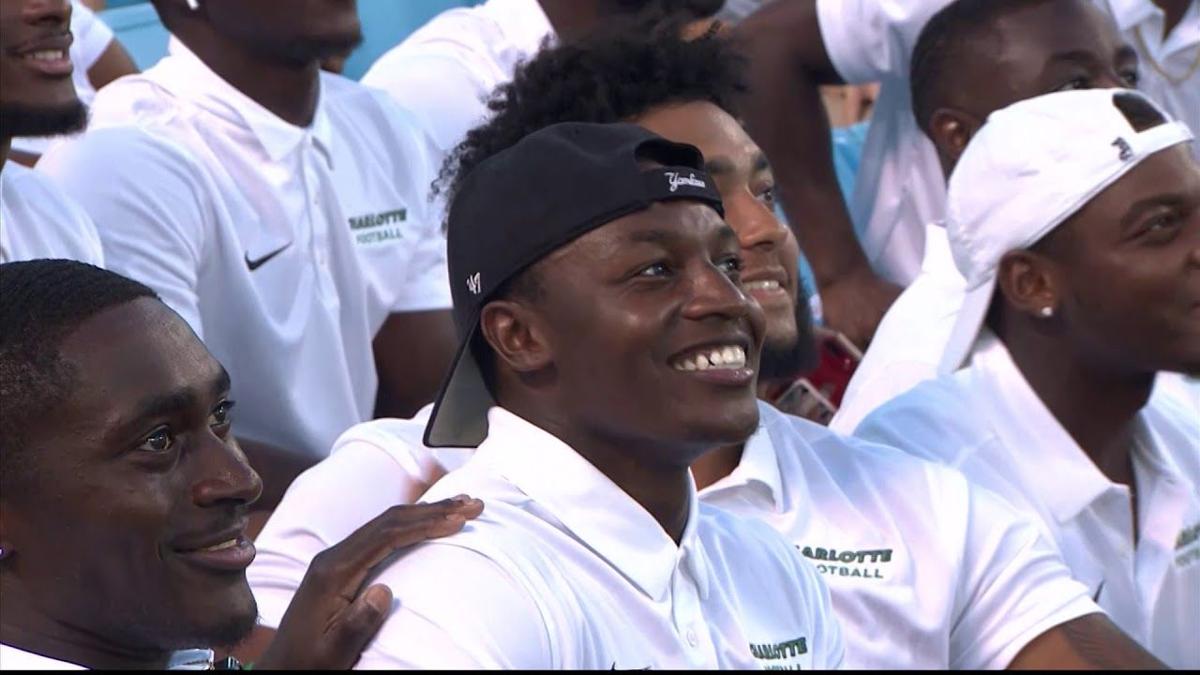 Christian Haynes reacting to news of earning a scholarship 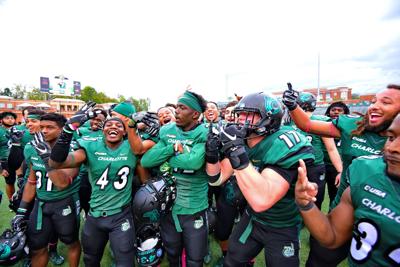 What Christian Haynes does off the field.

“I just know I want to be in front of the camera,” said Christian Haynes, a senior defensive back on the Charlotte football team.

What is your hidden talent? Haynes, also known as, “The Black Badger,” has a special one aside from his athletics. He shows off his talents, drive and determination on the football field and in front of the camera.

Born July 20, 1997, Haynes was raised in Jacksonville, NC and attended Southwest Onslow High School. After playing basketball, baseball and running track, Haynes started to follow in his brothers’ footsteps when starting football at the age of eight and sticking with it. With having five brothers and watching three of them go on to play college football, he wanted to do the same. Haynes’ main goal was to play division one football.

After applying to Charlotte, he didn’t get accepted until the spring. Haynes attended Elizabeth City State, a public HBCU, and played football there in the fall. Following one season there, Haynes knew he had the ability to play somewhere bigger as a walk-on or otherwise. He came to Charlotte in the spring of 2016 without the football team or the staff knowing who he was.

“I was just going to take a leap of faith, work my butt off, show my face consistently to the staff, and get on the football team.” said Haynes. When the football team would be out on the field practicing early in the morning, Haynes would run up the hill beside them. He wanted to show his passion and drive, while also training his body to do what division one athletes do; waking up early, working out, practicing and things like that.

“By the time I was done, they would be done and I would go down to the coaching staff and say hello.” said Haynes.

Haynes met up with former football player, Aaron McAllister, in class one day and started training with him. Due to Haynes’ work ethic and consistency, McAllister mentioned his name and phone number to the Charlotte coaching staff and Haynes received a call shortly after from the former head coach, Brad Lambert. Haynes is now a senior defensive back in his last season as a 49er.

Haynes adopted the name “Black Badger” in high school. His favorite football player, Tyrann Mathieu, is nicknamed “The Honey Badger.” The reason for Haynes’ favoritism towards Mathieu is the drive he has despite his short height. Matheiu had a gold Mohawk which sparked the name “Honey Badger.” When walking into high school with a black mohawk, his friend said, “Hey Black Badger!” The name stuck and has been a part of his identity ever since that day.

“Black Badger” started his career in front of the camera when Snapchat came out. He would make acting skits and use Snapchat to record them. His friends advised him to make a YouTube channel, but Haynes respectfully declined. However, he did watch a lot of YouTube.

“I thought that maybe I should give this a try because I had a bunch of ideas that I wanted to show,” said Haynes.

Haynes’ parents bought him a camera shortly after so he could put his ideas into action.

“It seems like a lot of people enjoy it.” said Haynes.

Haynes wanted to implement his teammates into the videos to show how they are not just football players. He wanted not only his personality to show, but his teammates’ as well to prove that they are more than athletes.

“We are more than just guys behind the helmets.” said Haynes.

One of the reasons Haynes does YouTube videos is to practice for his future dream of being on television one day. Becoming YouTube famous would be a blessing to Haynes and it would only get his desired career started ahead of time. With the preferred profession of sports broadcasting, Haynes has a couple ideas that would suit him perfectly.

The show “Sports Nation” has been an inspiration to Haynes and his capabilities in front of the camera.

“I want a show like Sports Nation, but funny at the same time. I want to bring the comedic thing into sports and just have fun with it,” said Haynes. “All I know is that I want to be in front of the camera, acting or otherwise.”

With plans for graduation in December 2019, Haynes has some post-graduate plans to think about. While wanting an internship in the broadcasting field, if the NFL opportunity is there, he will not pass it up. When it comes to pro-day, it depends on how this upcoming season goes for Haynes.

As a student-athlete at Charlotte, Haynes already has an impact on tons of people. He loves being an inspiration to kids and a motivation for them to follow their dreams.

“My main goal is to get on a big enough platform to make a positive impact to people all over the world whether that’s as an athlete or otherwise.” said Haynes.

With a new coaching staff for Charlotte Football under Head Coach Will Healy, Haynes had a chance to prove his walk-on willpower and ability another time in a different way. While only appearing in 12 games in the last two seasons and making two tackles, Haynes’ consistent hard work on and off the field shows to all, especially in the classroom and community. Haynes has been named to the C-USA Honor Roll and the Chancellor’s List.

On the last day of a long and tiring fall camp, Athletic Director Mike Hill, surprised the football team with tickets to the Carolina Panthers pre-season game against the Buffalo Bills on Friday, Aug. 19.

At a break in the game when the crowd was quiet, the announcer came over the public-address system to reveal a special message from Healy; a walk-on 49er football player would be put on scholarship. Little did Haynes know that his wish of wanting to be the focus of the camera would come true that night in an NFL stadium. His name and photo popped up on the video-board and he was awarded a full scholarship for his last year at Charlotte. All his dreams came true that night. Haynes was overwhelmed with joy and surprise when he heard his name. His teammates erupted with excitement and celebrated such an amazing accomplishment that was so well deserved. The videos and outpouring of love are still being shown.

“I don’t know that there’s a more rewarding opportunity than to give a guy a scholarship whose earned it,” said Healy. “It’s a pretty rewarding part of the job.”

Going into his last season as a 49er, Haynes has more drive than ever after receiving such a great reward for all his hard work.

“My teammates started going crazy. It was a very surreal moment,” said Haynes. “The fact that it came now is extra motivation to go harder, especially since this is my last season. I’ve got to bring it all, bring 100 percent and show them that I was worthy of this scholarship.”

“The Black Badger” will continue his YouTube channel so you can subscribe, like and tune in to catch Haynes in action. The first football game against Gardner Webb is on Thursday, Aug. 29 at 7:30 p.m. where Haynes will show out for one last season.

If you see Haynes on campus, be sure to yell, “Hey Black Badger!”