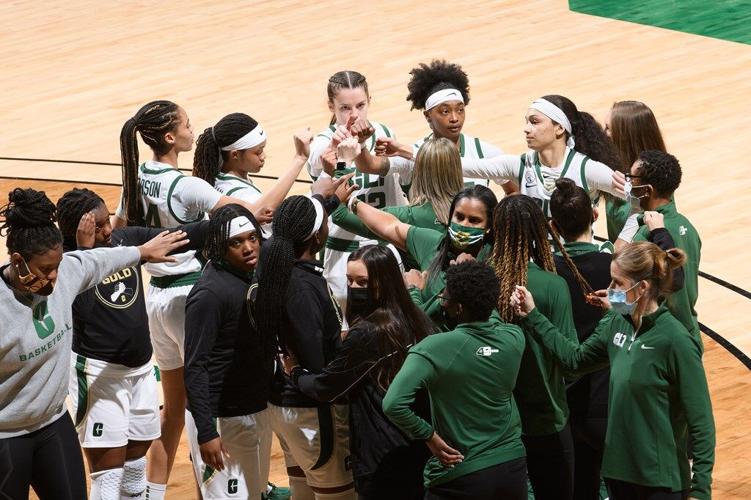 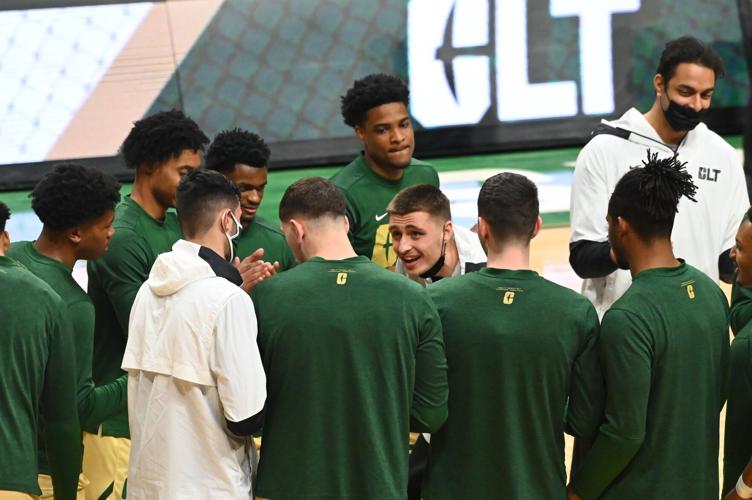 Charlotte huddles during a game.

The regular basketball season has officially come to an end, and March Madness has started. The Charlotte 49ers men's and women's teams head into the Conference USA tournament with hopes of winning and gaining an NCAA tournament berth.

Both teams fought cancellations and postponements this year due to COVID-19 but reached the end of the season, ready for the conference tournament.

"It's just really important to have positive momentum going into the (conference) tournament," said Head Coach Cara Consuegra after the regular-season finale. "We wanted to battle and fight and be who we are. That's what we're going to have to do for three games next week."

Although their opponent is yet to be determined, the three possible opponents are Old Dominion, Western Kentucky and North Texas, who Charlotte didn't face this season. Charlotte went 2-0 against Old Dominion, with both wins coming in overtime. Against the Hilltoppers, however, the 49ers were narrowly defeated, with both losses coming by one point.

Charlotte leads the C-USA in scoring, averaging 75.4 points per game. Heading into the conference tournament, the 49ers have won five of their last seven games, mostly due to Octavia Jett-Wilson's efforts. Since Feb. 6, when Jett-Wilson really started to improve her play, she has averaged 28.6 points per game, which is some of the country's best scoring during that stretch. During that stretch, she has reached her career-high in points twice.

It's not all just Jett-Wilson, however. Jada McMillian and Mariah Linney have had their moments this season and combine to average 30 points per game. McMillian leads the conference in assists per game with five, while Linney, who hit a career-high five threes against UTEP, is the team's best three-point shooter. Along with Jett-Wilson, these two players will be crucial components to the 49ers' success in the tournament.

As far as injuries, the 49ers have only been able to play seven players during the back half of their season. Jazmin Harris, one of Charlotte's key rotation players, has been fighting a knee injury, causing her to miss three of their last four games. Coach Consuegra emphasized the importance of not playing her if she isn't fully ready and considered her center day-to-day.

"She's working extremely hard. She's made good progress, but we probably won't know maybe until Thursday whether she can go," said Coach Consuegra.

Charlotte has the benefit of not playing until Thursday and has the potential to play a team that's played three consecutive days. This could be a blessing or curse, depending on the team they play. This team has the potential to win the tournament, but it will require a full-team effort. Jett-Wilson can try to carry the team if needed, but they can't rely on her to get 40 points in tournament games.

I think Charlotte gets to the semifinals but comes up just short against Rice, assuming they win their matchup. Rice has the best overall record in the C-USA and won 12 of their 14 games in the conference. This 49er team is fun to watch, but tournament basketball can end hopes and dreams.

"We have to get back to the way we were playing earlier in the year," head coach Ron Sanchez said in a mid-week press conference.

What you need to know

The team enters the conference tournament on an eight-game losing skid dealing with a series of injuries over the season. Jackson Threadgill has missed time with an injury, Caleb Stone-Carrawell has also missed time due to injury. The latest injury was to senior forward Milos Supica, causing him to miss games against UTEP and Marshall.

It has not been an easy road for the team, but Coach Sanchez isn't using it as an excuse for the team's play. The team has the five-seed on the east side coming into the tournament and will face UTSA in the first round on Wednesday, March 10. The two teams were supposed to play on Feb. 19 and 20, but due to severe weather in the San Antonio area, the two teams had to cancel.

Jahmir Young and Jordan Shepherd look to be the team catalyst as they prepare for the tournament. Young finished his sophomore season as one of the most dominant players in the conference, averaging over 18 points per game. Shepherd has been a key player on both the offensive and defensive sides of the ball this season.

I think that Charlotte will struggle against UTSA, and lose in a close game. It will be determined by which set of guards play best. If Jahmir Young and Jordan Shepherd can get going early, they have a good shot, but judging on the way the last half of the season has gone, my prediction is an early exit for the 49ers.

No amount of preparation in the world can make you forget things, and the teams most certainly will have to forget the regular season and treat it as if the record is 0-0 heading into the tournament if they want to win. Follow Niner Times Sports on Twitter coverage of next week's action.