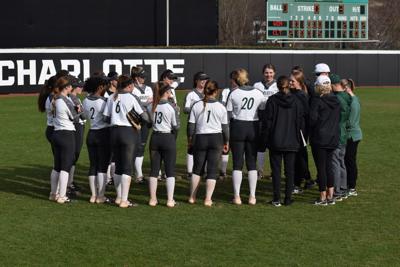 The 2019 and 2020 seasons have been full of change and new beginnings for the Charlotte athletic department. The men’s basketball, baseball, tennis and football programs have all received new coaches in the last two years.

The softball team has a new face as well for the 2020 season and look to get back to their winning ways.

DeVos was the longest tenured softball coach in school history and racked up 630 wins. She helped Charlotte win a conference championship in 2006.

Chastain will have big shoes to fill at Charlotte but has been ready for the challenge since she was hired June 2019.

“I am extremely humbled and excited to be the next head softball coach for the Charlotte 49ers,” Chastain said at the time of her hire. “We are going to build a foundation of competitive excellence in every aspect of the program in order to provide our student athletes the best experience possible.”

Chastain comes to Charlotte with plenty of experience under her belt. Chastain was the pitching coach at the College of Charleston for three years and for one year at Michigan State. Her latest stint was with Ole Miss, where she helped the Rebels advance to the Super Regionals in 2019. The team had a 2.29 earned run average with Chastain as the pitching coach.

Chastain herself has plenty of pitching experience as she played at SEC powerhouse South Carolina for three seasons. She had the lowest ERA on the team and led the team in starts her junior season.

Even though Chastain has plenty of experience under her belt, the new task at hand is the main focus for the young coach.

Charlotte is coming off of a tough 15-35 season and hasn't had a winning season since 2017. Chastain looks to turn things around.

“I’m excited to take Charlotte softball to the next level,” Chastain said. "We look to contend for a Conference USA championship and get to the NCAA playoffs.”

Chastain will have a young team on her hands this season with plenty of new faces. There is a total of eight newcomers and the infield will be made up of primarily freshman. Cori Henderson, Hailie Webster, Madelyn Wright, Tessa Hawkins, Reagan More and Riley Krueger are among those freshman. Maddux Hughes (Wright State) and Maddie Marchiando (Stetson) are the two transfers for Charlotte.

Chastain has seen her team come a long way since she first met with them back in the fall.

“We’ve come together as a team since September when we started practice,” Chastain said. “We’ve learned a lot of lessons and we are still growing and learning.”

Charlotte will be very young on the mound but still have some experience. The two seniors on the pitching staff are Carson Pace and Alison Green. Pace has compiled a record of 7-8 while Green threw 61.1 innings last year and had 40 strikeouts.

“I think with the pitching staff we are learning how to compete,” Chastain said. “Teaching the staff on how to go out with the right mindset and get as many strikes as possible.”

When it comes to hitting, Charlotte does have a key returner in Bailey Vannoy. The sophomore catcher is coming off of a season where she had the second highest batting average on the team with a .331. She also had 39 hits and drove in 22 runs. Vannoy was also the only player for Charlotte to make the C-USA Preseason All-Conference team.

Vannoy will be a key leader for the 49ers as she not only brings talent to the table, but experience as well. Vannoy looks to be that leader Charlotte will need this year.

Vannoy was brought in to be a dominant hitter and hasn’t disappointed so far. She knows how important she will be for a successful campaign.

“Coach puts a lot of belief in me and just tells me to do what you do and hit the ball hard,” Vannoy said. “I think our lineup behind me has a really big role in keeping the momentum going. As long as someone starts it, we can keep going.”

The road to having a turnaround season won’t be an easy one. Charlotte will have to play C-USA powerhouses such as Western Kentucky, Marshall and North Texas.

Along with that, the 49ers will have a tough run of non-conference teams on their schedule. Some of the most notable teams include SEC powerhouse South Carolina, the ACC’s Clemson and Pittsburgh. Charlotte will then have to take on North Carolina (Mar. 17) and Duke (Mar. 18) in back-to-back games in the middle of the season. Towards the end of the season in April, Charlotte will visit Auburn for a two-game series.

Chastain has had plenty of experiences playing big teams in big time games and hopes her and her staff's experience translates into success for the 49ers.

“I think what rings true at the highest level can ring true here,” Chastain said. “It’s just about putting everything together.”

Charlotte has already played ten games this season with five wins and six losses as of Sunday, Feb. 16. The 49ers lost two games to a tough Virginia team on opening weekend. Both games went into extra innings. Charlotte then went 1-1 against Appalachian State. In just those games, Chastain has seen a lot of improvement in her team that she hopes to continue to see.

“I think we have a lot of power at the plate, but I think we need to learn how to just keep it simple sometimes,” Chastain said. “We just need to simplify our mentality moving forward.”

Charlotte will have their first non-tournament style game this week. The 49ers will host USC Upstate on Wednesday, Feb. 19 at 4 p.m.