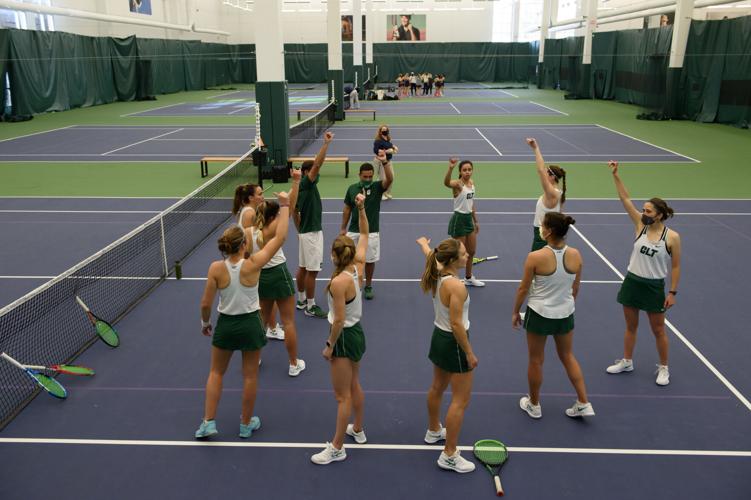 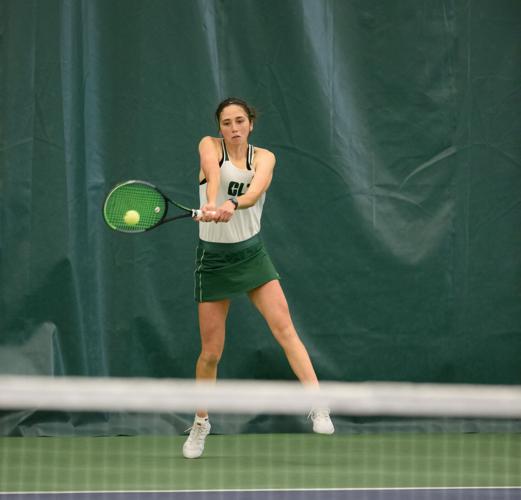 Charlotte's Emma Wilkins hits the ball in a match against Wingate.

Charlotte's Emma Wilkins hits the ball in a match against Wingate.

Charlotte's women's tennis team has started their 2021 season in style.

With no legitimate fall season due to COVID-19, there were plenty of unknowns. The 49ers have turned those unknowns into victories throughout the early portion of the season.

The 49ers are currently 8-3, winning eight out of their last nine, and show promise for the rest of the season. Charlotte picked up two victories against ACC teams.

"It's an awesome and rewarding feeling because it shows you as a coach, but also the team, it shows the players that what we're doing is, is making them walk that path," said Charlotte Head Coach Anthony Davison in a zoom interview last week.

The quality start to 2021 is one that has been a few years in the making. Davison became head coach of the team before the 2018 season. He inherited a team that had gone 9-13 during the 2017-18 season.

The very next season, in Davison's first year, the team went on an 11-game win streak to end the year 19-7 and made it to the Conference USA quarterfinals. The team was full of players that had just gone through the 9-13 season a year prior.

"I think that first year (there) was some really good immediate impact. I think we implemented a solid training program that wasn't necessarily in place before," said Davison on the quick turnaround. "And we just saw a big jump in, in their physical fitness and sort of toughness on the court. And I think that translated into a lot of those wins that that were close losses before."

Charlotte flipped a few losses into wins in 2019. The 49ers beat Winthrop and Campbell, two teams they lost to the year before by one point.

The development continued into the 2020 season, but the pandemic had other plans. After being apart throughout most of the spring and early summer, the 49ers were stripped of their fall season. Teams can usually play in tournaments throughout the fall, but that wasn't the case this year.

The fall season, even though there weren't scheduled games, was still crucial. The development of teams were in their own hands. Charlotte chose to make the most of it and found an identity as a team.

Everything has come full circle this season. Despite the unorthodox season where COVID-19 guidelines can sometimes complicate things, Charlotte has had one of its best starts under Davison. Two of Charlotte's eight wins have come against ACC opponents in Clemson and Virginia Tech.

The 49ers beat Virginia Tech 5-2 on Jan. 30, then edged out Clemson on Feb. 13 by a 4-3. Charlotte also has shutout Campbell and College of Charleston, winning those matches 7-0.

A fairly young team is producing success. There are five seniors, three seniors and one freshman.

The lone freshman is Emma Wilkins, and she has displayed impressive play in her first season with a 7-4 record thus far. Wilkins has played at the four, five and sixth spots for Charlotte. Wilkins dealt with the stress of being a freshman and the difficulties of playing a sport during a pandemic.

"It's been a different year with COVID. But I think I'm very fortunate with the team that I have, with coaches and, and all my teammates, they've been super supportive," said Wilkins. "I felt accepted right away, and I always knew that I had their support in whether it was school or personal things."

Wilkins' success has come as the season progresses. She opened up the season with two losses at #6 Duke and #16 Wake Forest but has only lost two singles matches since.

One of those losses came at Virginia Tech, where Wilkins felt like she learned the most. Wilkins won four straight after that loss, including picking up a 6-0, 7-5 at the sixth spot.

"For me, what helped me with my Clemson win was losing at Virginia Tech, when I lost my singles match," said Wilkins. "So even though the team won, it hurt because you always want to do better for the team."

According to her head coach, Wilkins has been a big help to the team in more ways than one.

"She's so professional," said Davison. "She really takes care of the little details, comes to practices early and prepared, her communications are great, she's always looking for ways in which she can progress and get better."

The season is far from over. Charlotte still has an important Conference USA slate that starts at home against Marshall on Mar. 13.

Wilkins hopes her team's season is a long one, as she thinks the 49ers' chances of making a playoff run are high.

The next match for the 49ers will be Friday, Feb. 26, at home versus East Tennessee State.