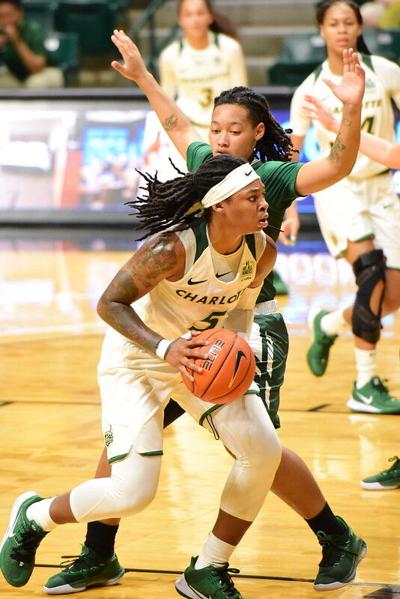 The coaching staff continues to produce professional players. It brings the spotlight back on the programs after a successful year for both teams.

Jade Phillips from the women’s 49er basketball team and Amidou Bamba from the men's team will be playing overseas to start their professional careers.

The first signing that was announced was Jade Phillips who signed with Quinta Dos Lombos on Sept. 10. Quinta Dos Lombos is a team based out of Portugal in the Liga Feminina de Basquetebol, which is the top women’s basketball league in Portugal and the team finished 16-4 last year.

Phillips will be a solid addition to the team based on the production she had on the court in her two years with Charlotte. She averaged 14.7 points and 9.1 rebounds. She was the leading rebounder and scorer both years after transferring from Syracuse University.

Phillips also had many accolades such as being named to All-Conference USA First Team in her senior season as well as earning an NCAA starting five selection and being named Conference USA player of the week in December. She was included in the Conference USA’s all-defensive team. The future is bright for the Raleigh native as she is the seventh former Niner to sign a pro contract under head coach Cara Consuegra.

The second signing was the starting center for the men’s basketball team Amidou Bamba who signed with C.B. Ciudad de Ponferrad. The team is based out of Ponferrada, Spain in the LEB Plata league. Last season in Charlotte, Bamba made a huge impact right away in his first season with the Niners under then second-year head coach Ron Sanchez.

Bamba, who was a graduate transfer from Coastal Carolina, was able to start every game last year. Bamba averaged 6.2 points per game as well as 4.0 rebounds. Bamba was one of the top shot-blockers in CUSA with a team-leading 26 blocks.

He had many standout games such as recording six double-figure scoring games. He had his season high in points in the road win against Marshall with 16 points. He also had his season high in rebounds against Georgia State and Maryland Eastern Shore. He had 14 points and 11 rebounds against Georgia State as well. Bamba had great production on the court but he excelled academically too.

Bamba earned third-team CoSIDA Academic All-American honors last spring. He was named to the CUSA all-academic team and was given a CUSA medal. Based on his past experience, Bamba is poised to have a leadership role at the professional level.